Iraq Is Currently Being Shaken by Violent Protests 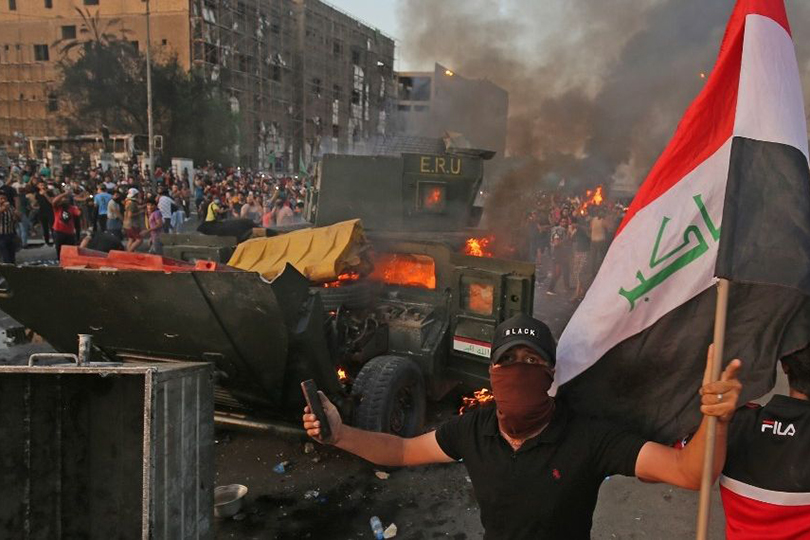 Iraq has been caught up in a wave of protests in recent days. These are effectively a continuation of protests that began in 2011 and reached a peak last year in Basra. What has primarily driven these protests are socioeconomic demands, anger with poor governance, and a rejection of rampant corruption in state institutions, as well as their becoming fiefdoms for political and paramilitary factions.

Even before the protests found their way into the global news cycle on October 1, there had been smaller, sporadic demonstrations organized in recent months by unemployed university graduates demanding jobs in the public sector. Miscalculations by ‘Adel ‘Abdul-Mahdi’s government, such as the firing of a very popular general in the antiterrorism force, who became a national figure due to his role in fighting the Islamic State, and the use of live ammunition and tear gas to disperse the October 1 protest in Baghdad, further angered protesters and motivated others to join them.

Why Does It Matter?

The new wave of protests is unique in two ways. First, unlike previous demonstrations that were eventually dominated by the Sadrists, who have a large, organized grassroots movement, and by the Communist Party, which pioneered street demonstration against the political elite and Islamist parties, the new protests are without leadership. They are to a large extent made up of unemployed and underemployed young men using social media as their main tool of communication.

Second, there has been an increasing radicalization of the protestors’ demands (such as calling for the downfall of the regime) and actions (such as attacking the headquarters of political parties and local governments). While last year’s protests in the south of Iraq had engaged in similar practices, the latest wave has been characterized by a more militant tone, and has spread to neighborhoods beyond Tahrir Square in Baghdad. This reflects growing mobilization against the Iraqi political class.

Moreover, the protests are mainly taking place in Shi‘a areas and continue a trajectory that accelerated after the Islamic State’s defeat, when socioeconomic demands took a central stage in street protests. Despite their fierce criticism of Islamist parties, protestors are post-ideological, using national symbolism and connecting nationalism and a particularly Shi‘a revolutionary spirit to issues of social justice.

What Are the Implications for the Future?

The protests might lose momentum as a result of the security crackdown and the shutting down of the internet. However, the structural problems that generated the protest movement in the first place will continue to exist and will lead to further social and generational polarization.

Unemployment, corruption, weak rule of law, and income inequality have become an inescapable reality, increasing the frustration and rage of Iraqi youths. More than 60 percent of Iraqis are under 24, and about 700,000 become employable annually. Iraq is also a society that adds 1 million people to its population every year, increasing the demand for services and social and medical care. In his first speech after the protests, the prime minister said that there were “no magical solutions” to these problems. Yet, the image of powerlessness such statements project and the lack of hope for major change is exactly what has turned the frustration into a destructive rage.

‘Abdul-Mahdi has failed so far to introduce any major reforms. He has also become increasingly a hostage to the powerful political and paramilitary factions that have perpetuated their domination through legal and extralegal means. Without meaningful change in how politics are managed, starting with a reform of the electoral law to allow just representation, and without ending the partisan apportionment of state positions and resources, there is very little hope that an effective amelioration of conditions will be possible.