A Vehicle for Revolution 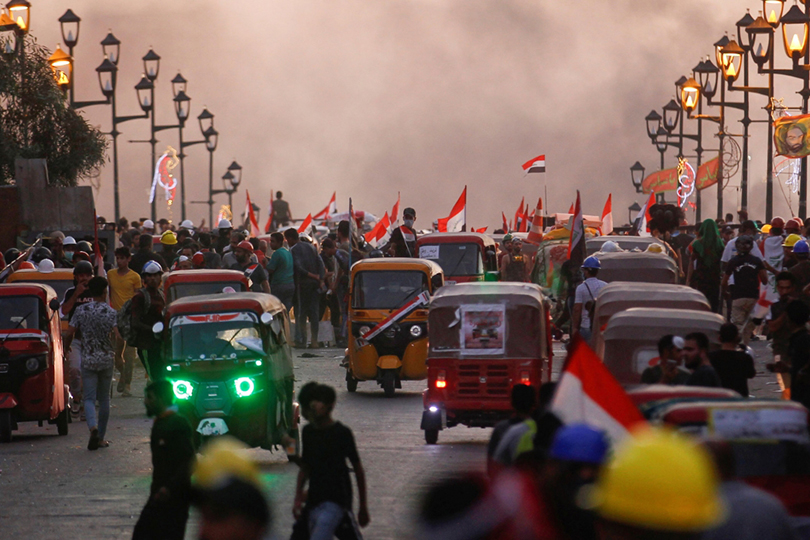 Before the recent protests in Iraq, motorized rickshaws known as tuk-tuks were confined only to the peripheral areas of eastern Baghdad. Its drivers’ activity was part of the informal economy, unregulated and “unlawful.” However, it eventually encroached on the daily life of inhabitants of areas where tuk-tuks were allowed, echoing sociologist Asif Bayat’s description of the shared practices of ordinary people as being directed at advancing the interests of the marginalized.

However, when demonstrations in Baghdad’s Tahrir Square started in October 2019, the tuk-tuk emerged as an essential part of the scene, skillfully evading the restrictions imposed by security forces and providing logistical support for the protesters. It became a life-saving ambulance, passing through crowds to transport injured protesters to hospitals. Soon, many protesters announced that the vehicle was a symbol of the “revolution,” and the first newspaper published by a protesting group was named Tuk-Tuk. But what is also interesting is the recognition tuk-tuk drivers have earned in the last four months. Today, they are free to move in Baghdad’s central areas and, according to local sources, the government has begun to provide their vehicles with registration plates.

One way to understand the elevation of the tuk-tuk’s standing is to see it as a product of the struggle of a marginalized segment of Iraqi society challenging the limits and boundaries imposed by the sociopolitical status quo. In this sense, it is a metaphor for the entire protest movement that has been ignited and kept alive by youths, mostly unemployed or underemployed or, in the case of students, awaiting unemployment. Tuk-tuk drivers had very little to lose when they decided to join the demonstrators, and their decision contributed to the eventual expansion of their domain of activity and the improvement in their social and economic status.

Similarly, the protest movement embodies the struggle of a coalition of individuals and groups seeking recognition and a larger share of Iraq’s material and symbolic resources, as well as of those spaces dominated by ruling factions and Islamic groups. The movement has multiple layers and voices that reflect different priorities. For some it is about substantial reform of the political system; for others it is about social and economic justice, or the rejection of Islamism and associated conservative values. Some even see the protests as an opportunity to break their daily routine and hang out with friends. Occupying streets and organizing demonstrations reflect the increasing politicization of youths as much as the failure of existing channels of power to represent or absorb them.

At the center of this contestation is the implicit demand for a better distribution of power and wealth. This can be achieved by creating a more representative government and ending the system of apportionment, or muhassasa, in which the state has become a pie to be divided among political and paramilitary groups. Hence the protestors are demanding free and fair elections under a law designed not to reproduce the dominance of the ruling factions.

Here, it is essential to understand how Iraq’s economy is managed and why the protests are the product of a structural strain in the system. Iraq is a rentier state, in which oil revenues account for 95 percent of the government budget. The fall in oil prices since 2013 has exposed the country’s economic fragility, while the cost of the war against the Islamic State and demographic growth have increased pressures on a shrinking resource base. These problems have been exacerbated by the inequitable and parasitical management of national revenues by the ruling factions, as well as their failure to create alternative sources of generating capital.

About 6 million Iraqis, more than 15 percent of population, earn salaries, pensions, and financial compensation from the state. In 2019, this totaled up to $52 billion of the $111 billion budget, which featured a high deficit of just over $23 billion and was criticized for being wasteful and lacking a long-term vision. This meant that about 60 percent of actual revenues was spent on salaries and pensions. If this amount was added to other “operational” expenses, only a small fraction remained for investment and infrastructure, of which a large part was channeled to fund the political factions’ shadowy business interests or was absorbed by the deeply corrupt state apparatus.

Economists estimate that about half of Iraqis benefit directly or indirectly from salaries and pensions. However, as the population grows by about 1 million every year and the job market receives more than half a million new job-seekers annually, the defective distribution of wealth through salaries, pensions, patronage, and corruption fails to sustain a reasonable degree of social and political equilibrium. As shown in a recent Ministry of Planning report, the poverty rate is very high in southern cities where protests have been recurrent—44 percent in Dhi Qar and 52 percent in Muthanna.

The number of Iraqis who are left out by the current system is swelling, and many young graduates who had the expectation of obtaining a safe job in the public sector have found themselves unemployed or forced to work in the insecure and poorly-paid informal sector, perhaps as tuk-tuk drivers. A pharmacist in Nasiriyya who became a committed activist in the protest movement told me how some of his peers failed to find a job in the public sector and had to look for precarious jobs outside their specialty. Meanwhile, he added, “local officials and senior members of militias have enriched themselves immensely, building houses or occupying offices in the most expensive neighborhoods of the city.”

The government’s response to this problem, beside security crackdowns on protestors, was to promise to appoint more job seekers in the public sector. It provided no explanation for how to secure their salaries without increasing the deficit and draining the state’s already shrinking resources. Nor did it specify what would happen when more youths enter the job market in the next few years.

A new boundary is emerging in Iraq between those benefiting from the disproportional and politically driven distribution of oil wealth, and those who do not. This division is likely to deepen as the ruling factions and the state bureaucracy, which an Iraqi economist described as “the largest lobby in the country,” continue to resist any substantial reform that could damage their interests. That is why the protest movement can be seen as a form of bargaining between the coalition of protesters and the forces benefiting from keeping the system unchanged. It is unlikely that it will end with one side completely defeating the other. More likely, it will open the door to a long period of social and political instability as the current situation proves unsustainable and no clear alternative becomes apparent.