Some Iraqis ditch fight against Islamic State for life in Europe 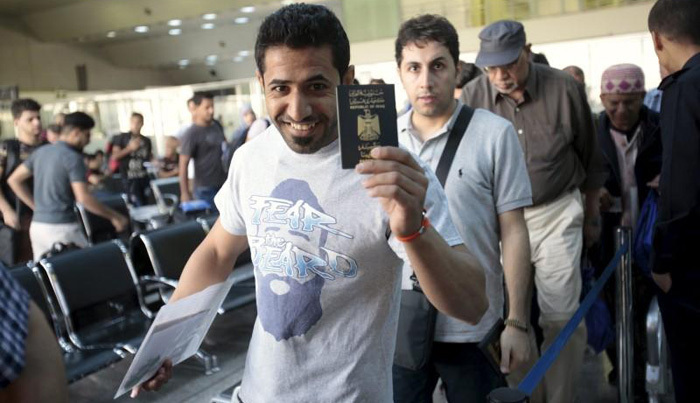 Reuters - Some Iraqi soldiers are abandoning their posts and joining a wave of civilian migrants headed to Europe, raising new doubts about the cohesion of the countrys Western-backed security forces in the fight against Islamic State militants.

Interviews with migrants and an analysis of social media activity show scores of fighters from the national army, police and special forces as well as Shiite militias and Kurdish peshmerga have left in recent months or plan to go soon.

They join more than 50,000 civilians who have left Iraq in the past three months, according to the United Nations, part of an even larger exodus from neighboring Syria and other conflict zones across the Middle East.

The inability of Iraq to retain its soldiers threatens to further erode morale in a military that has partially collapsed twice in the past year in the face of the Islamic State militant group.

It could also undermine the efforts of a U.S.-led coalition that has spent billions of dollars training and equipping Iraqi forces to take on the militants.

A spokesman for the Iraqi defense ministry said the military was not concerned about the migration of soldiers, which he put in the tens out of a security force estimated to number in the tens of thousands.

The armed forces are performing their duties. There is no reason to be worried, said General Tahsin Ibrahim Sadiq.

But Saed Kakaei, adviser to the minister of peshmerga forces in northern Iraqs Kurdistan region, said while he could not provide a specific figure for how many peshmerga forces had left, the numbers were concerning”.

The soldiers departure highlights a pervasive sense of hopelessness among many Iraqis more than a year after Islamic State seized a third of their countrys territory, threatened to overrun the capital and declared a modern caliphate.

Despite driving them back in some areas, members of the security forces say they are leaving because they face daily offensives by the insurgents, sectarian violence, and economic depression.

Many in the security forces are also frustrated and disillusioned with elected officials, who they allege abandoned them on the frontlines, while failing to provide adequate resources and enriching themselves through graft.

Iraq is worth fighting for but the government is not, said a 22-year-old SWAT policeman who decided to emigrate after his brother was killed in battle earlier this year at the northern Baiji refinery where he was also posted.

There is no concern for us at all. The government has destroyed us, he told Reuters, saying Baghdads failure to reinforce soldiers had caused avoidable losses in a battle that has dragged on for more than a year.

Control of neighborhoods in Baiji, about 190 km (120 miles) north of Baghdad, has changed hands many times. Authorities said in July they had recaptured most of the town, but Islamic State attacked central neighborhoods days later, forcing pro-government forces to pull back.

Others echoed the policemans concerns. A 33-year-old special forces member who was based in western Anbar province - an Islamic State stronghold - said he had lost any reason to stay, and joined 16 fellow soldiers who smuggled themselves to northern Europe last month.

We were fighting while the government and political parties made it their mission to make money and officials sent their children to live abroad, he told Reuters via online messaging.

What drove us to leave was seeing our guys getting wounded, killed or maimed, and nobody cared.

Baghdad launched a campaign to retake the Sunni heartland of Anbar after the provincial capital Ramadi fell in May, leaving only a few government holdouts across the sprawling desert territory.

But fighting has progressed fitfully with sectarian tensions coming to a head and ground advances delayed by explosives planted by Islamic State along roads and in buildings.

A special operations member based in Ramadi said the elite unit alone had seen more than 100 fighters leave for Europe in the past six months. Reuters could not independently verify this.

Many soldiers who left have changed their Facebook profiles from portraits in fatigues beside tanks or holding machine guns to photos riding bikes or relaxing in parks in Austria, Germany or Finland.

Iraqis have long complained of corruption and mismanagement in the government, including the armed forces. An official investigation last year found 50,000 ghost soldiers on the armys books. The ghosts, the report said, helped fuel the militarys collapse in June 2014 in the northern city of Mosul.

These men were on the army payroll but paid their officers a portion of their salaries and in return did not show up for duty, enriching their commanders and hollowing out the military force.

Iraq has since come to rely heavily on Shiite militias and volunteer fighters, grouped under a government-run body called the Hashid Shaabi. But even some Hashid, who were called to take up arms by the countrys top Shiite cleric, are leaving.

A 20-year-old Shiite fighter from the eastern province of Diyala, who declined to identify himself or the specific militia he belonged to, said pro-government forces receive inadequate support to fight Islamic State.

He recently made a month-long journey to Sweden to join two cousins who are themselves former Iraqi police officers.

You cannot fight a war or live in a country under these circumstances, he told Reuters via Facebook from the Stockholm area. The politicians ransacked the country in the name of religion. Iraq is not ours anymore; we are merely tenants.

Reuters could not independently verify the fighter’s identity.

Hashid spokesman Ahmed al-Asadi could not provide an accurate count for fighters who had migrated, but said the government needed to do more to keep young Iraqis from leaving.

Reforms launched last month by Prime Minister Haider al-Abadi seek to end a system of ethnic and sectarian quotas that has spawned corruption and mismanagement. The reforms also aim to improve accountability in the military and other state institutions.

But the initiative, hindered by bureaucracy and political jockeying, has led to few noticeable gains on the battlefield or improvements in peoples daily lives; many lack basic services such as electricity.

Though Iraqis have been fleeing poor government, violence and economic hardship for decades, recent policy shifts in Europe have presented a fresh opportunity to escape.

Looking on this summer as refugees from neighboring Syria received a warm reception in Europe, many decided to leave at short notice, using Facebook and other social media to plan their trips.

The United Nations estimates hundreds of thousands more could leave Iraq in the coming months.

But the soldiers arriving in Europe face an unknown future. A spokeswoman for U.N. refugee agency UNHCR said those judged to be former combatants would not be granted refugee status.