Years of Terror: From Al-Qaeda to ISIS 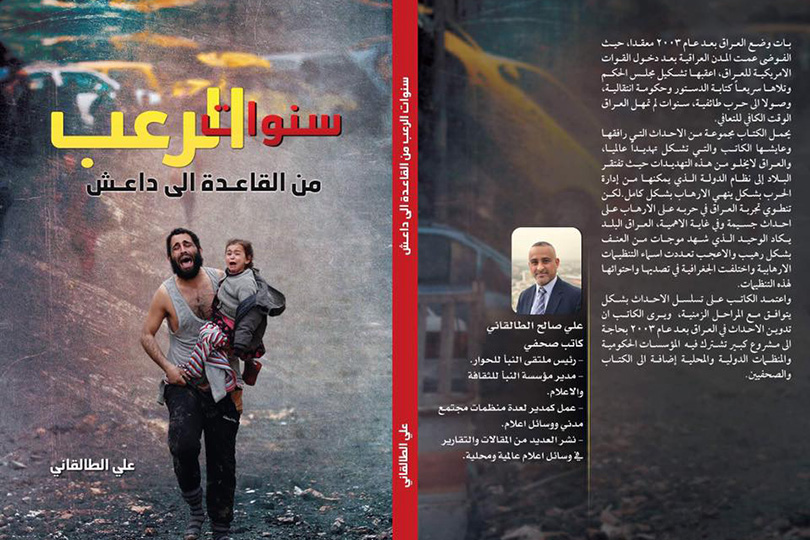 In this book, the author, Ali Al-Talikani, talks about the traumatic experiences of terrorist operations. Some he personally witnessed as he states in the book's introductions: I embarked on following the field events not to mention having several interviews with a number of tribes' personalities and fighters and having a close look at news and book resources for the sake of writing this book. The book reveals Iraq's experience of terrorism and fighting it through a decade of time. Nevertheless, recording events of Iraq post-2003 needs a huge project where all the governmental institutions and the international and local organizations participate in it.

The book consists of 45 articles, a conclusion, and a number of the author's tweets extensively collected to shed light on terrorist actions in Iraq. The author opens his book with an article entitled "Iraq sinks in the sea of infightings". He presents a realistic vision of political parties racing to authority. These actions resulted in violent conflicts that paved the way for extremist organizations to sneak in and topple the political process blocking the new political system in Iraq. the author goes on saying: "Iraq faces multiple crises on different levels, among these crises is the strong activity of the doctrinal and political movements that work according to certain ideologies by resorting to violence and discarding whoever wants to lead Iraq to the safe harbor. These movements will severely threaten the future of governing in Iraq".

The writer has reached every spot tainted by terrorism and dealt with thoroughly from the perspective of a security researcher. Hence, he wrote an article entitled "Sterile Struggle in Anbar". The writings in this book are not limited to terrorism exclusively, but they deal with the pursuit of several regional and international actions in solving the Iraqi conflict. An interesting quote from this article: "it is noticeable that Iraq has suffered from a series of traumatic events and escalated in its repercussions. This led to the intervention of the regional and international actors to help Iraq from the catastrophic situation that made Iraq look like a drowning man holding to a straw that may save him.

The writer sought a different path, he did not focus on terrorism and violence precisely, but he went to reasons that failed in maintaining violence that attacks Iraq. nevertheless, why these areas were Hotbeds of tension and easily dominated by terrorists. This article was a true practical experience that will assist in confronting violence and containing it before it evolves and expands.

Many articles are included in the book center around the reasons and the results of terrorism, the mechanism of facing it by restraining the causes before they surface and dramatically worsen.