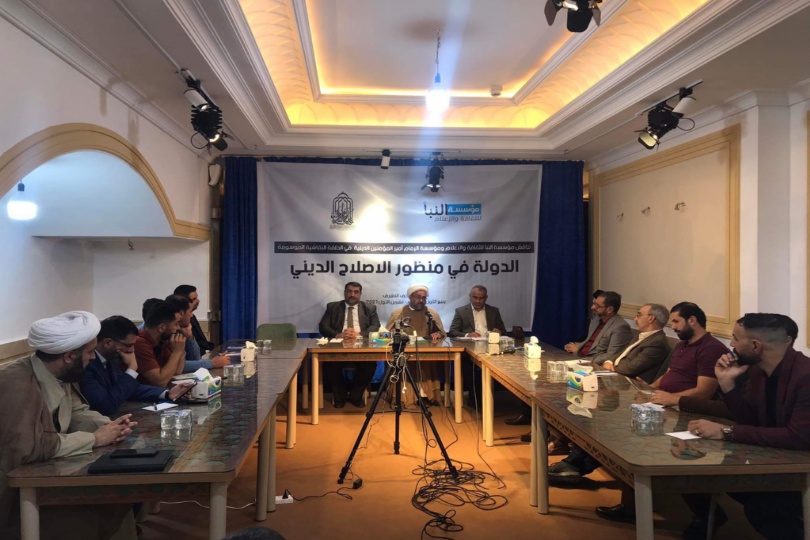 Annabaa Organization for Media and culture with collaboration of Imam Ali (prince of the Faithful) Institution held a panel discussion entitled The State in Religious Reformation Perspective. The session was attended by a group of religious figures, academics, journalists, and people concerned with the topic.

Ali Altalikani, a writer and a director of Annabaa Organization for Media and culture, said in the opening statement: the religion and state relation is a controversial topic discussed by the west and the east as many wrote about it. Yet, we were unable to find a common ground for dialogue regarding the connection and the role of each one of them.

He added: the discussion had two main perspectives: the first one is the perspective of one of the religious scholars and the other one is university academic. Both researchers relied on historic research and another research that discusses the state reformation from a religious aspect, and how religion view the concept of state and its structure in old and modern times.

Altalikani pointed out that Shia elite must deliver a message of responsibility to help their people transcend regarding customs, traditions, habits, and thoughts in relation to build the state and society progress towards righteous values whether it is a country-side or a city.

Dr. Hisham Al-Sayab said: the state political reformation from a religious aspect has been a major concern to jurists and modern scholars. Those concerns have varied and treated with critical proposals that shaped a realistic treatment to the issue circumstances in the view of the Sunnis or Shia scholars who emphasized on the necessity of reforming the ruler and gradual reformation to the Islamic society as justice and equal opportunities are major fundamentals.

Al-Sayab added: undoubtedly, having such symposiums and forums will tell the society about our scholars’ efforts as it will contribute in supporting intellectuals' role in communicating with the media and cultural society.