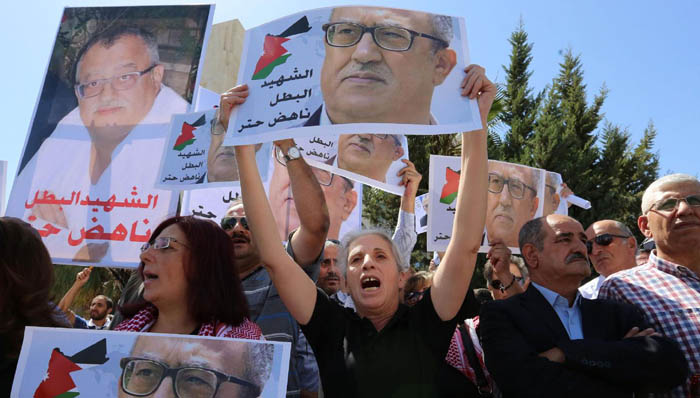 Jordanian authorities imposed a blackout on the country’s press and social media Monday, preventing any coverage of the murder of the Christian writer shot dead outside an Amman court as protesters called for the government’s resignation.

The censorship order by the Jordanian judiciary came after the murder of Nahed Hatter as he arrived at the city’s Palace of Justice on Sunday, accused of sharing a satirical cartoon on Facebook and of breaching the country’s blasphemy laws.

It showed a bearded man smoking in bed with a woman and asking God to deliver him wine.

A robed 49-year-old radical Muslim and former preacher shot and killed Hattar because of the cartoon, viewing it as an insult to Islam. Police arrested him at the scene of the shooting. He now faces charges of premeditated murder and possibly the death sentence.

International rights group Amnesty International on Monday condemned the killing as “a deplorable attack on freedom of expression in the country.

Hattar had deleted the post and apologized, saying that he had not wished to offend anyone but only to challenge the worldview of the Islamic State militant group (ISIS), which the Jordanian government is battling as part of the U.S.-led coalition in Iraq and Syria.

Hundreds of protesters, including family members of Hattar, took to the streets of Amman near the office of the prime minister, chanting: No to extremism, no to violence, and Down with the government, Reuters reported.

Following the murder, there was anger among a section of Jordanian society about the failure of the government to protect Hattar at one of the capital’s institutions. His family also said he had faced dozens of death threats but accused the Jordanian authorities of refusing to act.

Hattar had his enemies, having supported Syrian President Bashar al-Assad and calling for the denial of rights of Jordanians of Palestinian descent, but the threat of rising radical Islamism in the country is a concern for the country’s secular, liberal and Christian sections of society.

Could we live in a world without rules?

he New-Old Threat to Economic Freedom

The fight to keep the internet free and open for everyone

When Knowledge is Powerless