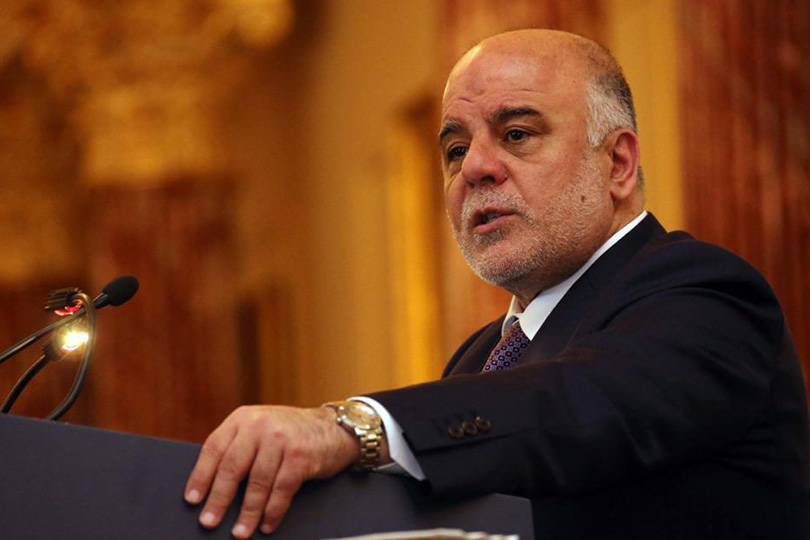 If the Iraqi population is “threatened by the use of force outside the law, then we will intervene militarily,” he told the Associated Press.

Iraq’s Kurdish region is set to hold a referendum on 25 September on independence from Iraq. The vote will be held in the three areas that make up its autonomous region, and also in a disputed area that are claimed by Baghdad but held by Kurdish forces.

The use of force

The leaders of Iraq’s Kurdish region have said they hope the referendum will push Baghdad to negotiate a path for independence. Abadi said such negotiations would be complicated by the referendum. “It will make it harder and more difficult,” he said, but added, “I will never close the door to negotiations. Negotiations are always possible.”

Analysts say the referendum plan, which has stirred Arab-Kurdish ethnic tensions, could mark the end of an era of cooperation during which Baghdad and Arbil battled IS together after it seized swathes of northern and western Iraq in the summer of 2014.

Iraq’s Kurds have come under increasing pressure from regional powers and the United States to call off the vote. On Saturday it emerged that the United Nations has urged Iraqi Kurdish leader Massud Barzani to drop plans for a controversial independence referendum and enter talks with Baghdad aimed at reaching a deal within three years.

In a document he delivered to Barzani on Thursday, Kubis proposed "structured, sustained, intensive and result-oriented partnership negotiations... on how to resolve all the problems and outstanding issues" between Baghdad and Arbil.

The Kurdish Regional Government (KRG) based in the northern city of Arbil is embroiled in long-standing disputes with the federal government over oil exports, budget payments and control of ethnically divided areas. Iraqi Kurdish lawmakers on Friday approved holding the referendum in the face of fierce opposition both from Baghdad and the Kurds' international backers.

In the region, Turkey and Iran fear the referendum could stoke separatist aspirations among their own sizeable Kurdish minorities.

Turkish President Recep Tayyip Erdogan has warned the vote could prove “a very, very bad thing” for the Iraqi Kurds, whose economy is heavily dependent on oil exports via a pipeline running through Turkey.

On Thursday, the Baghdad parliament fired the governor of the northern province of Kirkuk, Najm Eddine Karim, over his provincial council's decision to take part in the non-binding Kurdish referendum.

The oil-rich province is disputed by Baghdad and Arbil and home to diverse communities including Arabs and Turkmens who oppose the vote.

Underlining Iran's opposition, the head of an elite Revolutionary Guards unit, Qassem Soleimani, is in Suleymaniya, a security source said, and plans to stay on in the Iraqi Kurds' second city until the planned referendum date.