Iraq working to make money, not burn it up in gas flares 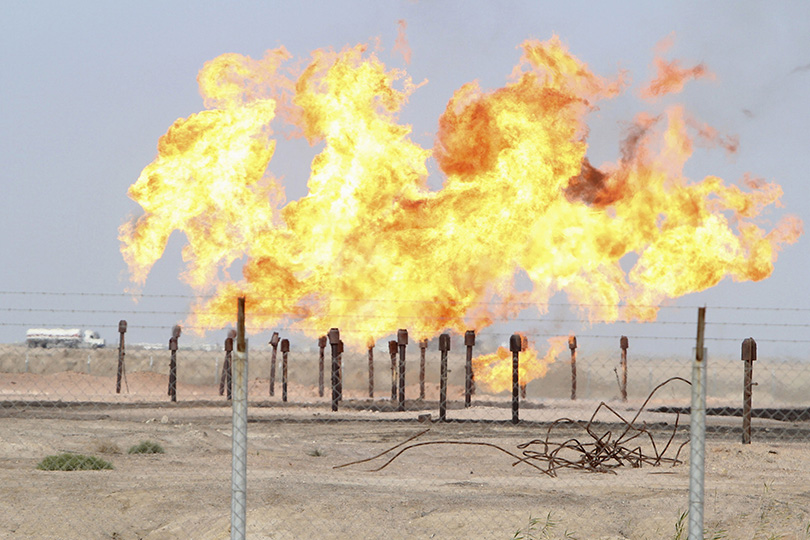 Iraq plans to expand capacity at its oil refineries while at the same time reducing the amount of gas that is burned off during oil production. Instead of wasting the gas, the country will reap the benefits of putting it to good use.

New Oil Minister Thamer al-Ghadhban announced Oct. 31 that he will pay particular attention to oil-rich Basra in southern Iraq, an area where services have been neglected and people are angry.

Iraq continues to burn off most of the gas associated with oil production in its fields because it lacks sufficient facilities to capture the gas.

Iraq has a plan to stop burning off gas by 2021 and has already started using some of the oil-associated gas. Former Minister of Oil Jabbar al-Luaibi stated Sept. 29 that the country had begun capturing natural gas from oil fields in Dhi Qar. The process is of great importance for Iraq, which has burned off gas for decades, squandering the equivalent of $45 billion each year.

The project was set up June 12 with state-owned Dhi Qar Oil Company announcing that after technicians were done connecting a gas pipeline, the company would begin capturing associated gas from the Nasiriya oil field without burning it off for the first time. The goal is to pump up state revenues.

Hamza al-Jawahiri, an oil expert and consulting engineer for the Ministry of Oil, told Al-Monitor, “The Ministry of Oil was aware of the [gas] flaring problem and subsequent squandering of wealth and money waste. The political and security circumstances, however, had prevented the completion of projects, which remained mere ink on paper.”

He explained, “In the past few years, Iraq only managed to use small amounts of gas in electricity generation and chemical industries. The largest amount of associated gas wasn't exported, nor [has Iraq] capitalized on its industrial value.”

Capitalizing on associated gas isn't easy, he said. Gas capturing has to be integrated with oil production and requires "an advanced transport network connecting the gas in Iraq’s scattered oil fields to a single export point."

He added, "This is on top of the need for gas purification plants to remove impurities.”

To deal with these challenges, Iraq signed a contract in April with General Electric's Baker Hughes company for technology to process associated gas as part of the country's efforts to end gas flaring by 2021. Iraq signed a similar contract in January with US Orion.

Assem Jihad, spokesman for the Ministry of Oil, told Al-Monitor, "These projects are a part of a comprehensive strategy designed to perfectly capitalize on the gas wealth.” In addition, “50 million SCF has started to be produced daily from the Nasiriya field. Such a step is the first on the path toward producing 200 million SCF per day from the Dhi Qar fields alone.”

He said, "Exporting gas doesn't just generate huge funds for the state budget, it will also provide the necessary supply for electricity generation and the petrochemical industry. It will also meet the local market’s need of liquefied natural gas" and that of various facilities providing services to the sector.

Jihad said that another step is a new contract to process 200 million SCF of associated gas per day from Maysan fields and Nahran Omar field in Basra.

Mohammad Zaki Ibrahim, another oil expert for the Ministry of Oil, told Al-Monitor the government's main investments have been in the oil fields where associated gas is extracted: the Nasiriya and Gharraf fields. The Abu Amoud field also will be included.

Ibrahim added that the Nasiriya project was completed with South Gas Corporation and Oil Projects Corporation, and in cooperation with Italfluid Geoenergy Srl. Iraq is leasing the gas treatment plant in al-Qatia from the Italian company. He explained that the process used first removes water and vapor from the gas before it is fed to the dry gas pipeline, which runs 350 miles from Taji, north of Baghdad, to Basra.

It is important to end gas flaring and subsequent air pollution and start using the recovered gas to supply power plants. This is not to mention the project’s social significance in the southern parts of Iraq, as it generates the necessary funds to provide and improve services there. It also creates more jobs in the area, especially in Basra, where people have been killed and injured in demonstrations that began in July protesting the poor economy and lack of services.