The 2020 Presidential Election – Who will win? 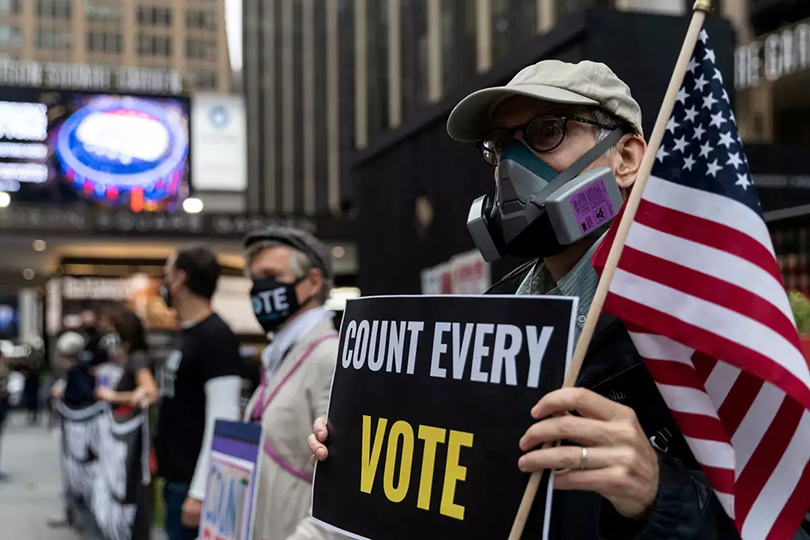 It is just 2 days until the 2020 presidential election and anyone who says they know for sure who will win is relying on the average of polls that showing Biden with a 6-8 points ahead of Trump.

Polls, which overlooked Trump’s strength in 2016, see him losing again. Could they be right in saying Biden will win?

For all the faith given to polls, they have been somewhat unreliable over the years. There was the 1948 presidential election that showed Dewey ahead of Truman by a sizable percentage. The highly regarded Gallup poll showed Reagan behind by 6 points two weeks before the 1980 election, only to see Reagan beat Carter in a major landslide. And, of course, there is the 2016 election that predicted a landslide by Hillary Clinton over Trump.

There are several factors that indicate that they could be over estimating Biden’s strength. First, there are the large enthusiastic crowds at Trump rallies. These are just as big as those in 2016, when the polls said Trump was going to lose. Then there are the Biden rallies, where a few dozen attend.

One way to avoid the “socially acceptable” answer problem is to ask other unrelated questions that indicate the actual views of the person being polled. In fact, the Trafalgar Group, which was the most accurate pollster in 2016 calls these “unrelated” questions the “secret sauce” in their modeling (they also use larger samples, which is more reliable, but more expensive). And their results indicate a big difference between what respondents say and what they believe.

If we examine the dramatic report of THE HILL on some of the positive Trump polls, we can find the anxiety among pollsters and their desire to avoid the debacle of 2016.

Most pollsters show Democratic presidential nominee Joe Biden with a sturdy and stable lead over President Trump at a time when tens of millions of people have already voted and there is almost no time to change the course of the race.

But a handful of contrarian pollsters believe Trump’s support is underrepresented and that election analysts could be headed for another embarrassing miss on Election Day.

The battles have spilled on to social media, where some well-known political analysts have dismissed polls that show Trump leading Biden.

The Trafalgar Group, which was the only non-main stream outlet in 2016 to find Trump leading in Michigan and Pennsylvania on Election Day, shows Trump with small leads in both states, which would be keys to another Trump win in the Electoral College. Nearly every other pollster shows Biden with a comfortable lead.

Trafalgar’s Robert Cahaly says there is a hidden Trump vote that is not being accounted for in polls that show Biden on a glide path to the White House.

“There are more [shy Trump voters] than last time and it’s not even a contest,” Cahaly said, adding that it’s “quite possible” that the polling industry is headed for a catastrophic miss in 2020.

Both have dug into the crosstabs of Trafalgar polls and pointed to questionable breakdowns as evidence Trafalgar doesn’t know what it’s doing. For instance, the crosstabs in a Michigan poll, which are no longer online, appeared to show Trump leading Biden by 8 points among young voters, a Democratic stronghold.

“[Trafalgar] doesn't disclose their ‘proprietary digital methods’ so I can't really evaluate what they're doing,” said Jon McHenry, a Republican pollster with North Star Opinion Research. “They're far enough out on a limb that a year from now, we'll all remember if they were very right or very wrong.”

FiveThirtyEight’s model gives Trump about an 11 percent chance of winning — roughly equal to pulling an inside straight in poker — after giving him about a 30 percent chance on Election Day in 2016.

Biden appears to have a more comfortable lead in the polls than Hillary Clinton had at this point in 2016. Polls show Trump is underperforming — in some cases dramatically — among the key coalitions that powered his 2016 victory. Biden is also a more popular candidate than Clinton.

McHenry said he does not think there are many “shy” Trump supporters who would lie about their intentions.

Rather, there is concern about a “skewed response rate pattern,” whereby Trump voters would be less likely to participate in a survey or answer the phone when a pollster call.

Still, McHenry noted that this would not be an automatic benefit for Trump. In Pennsylvania, for instance, he found Democrats were less likely to answer the phone than their registration would suggest.

“I can't definitively say there is no response bias, but I'm skeptical of it, and it certainly wouldn't be enough to explain the national deficits we're seeing,” he said.

Jim Lee of Susquehanna Polling and Research has been another proponent of the “submerged” Trump voter theory.

A recent Susquehanna survey of Wisconsin found Trump and Biden tied, making it the only poll to not show Biden in the lead in the Badger State since August, when the Trafalgar Group found Trump ahead by 1 point. In Florida, Susquehanna shows Trump leading by 4 points, while the FiveThirtyEight average gives Biden a 2-point advantage.

“There are a lot of voters out there that don't want to admit they are voting for a guy that has been called a racist. That submerged Trump factor is very real,” Lee said this week on WFMZ’s Business Matters. “We have been able to capture it and I’m really disappointed others have not.”

The University of Southern California’s Dornsife Center is publishing results from its regular national poll but is also using parallel “experimental” questions asking people who they think their social contacts are voting for and who they think will win their home state.

In 2016, USC-Dornsife made headlines for being one of the few polls to show Trump leading nationally. Clinton ended up winning the national popular vote and USC later adjusted its methodology, saying it oversampled rural voters in the last election.

This time around, the USC-Dornsife poll shows Biden leading by 11 points nationally.

However, polls tend to slew a lot when it comes to Michigan. The RCP average shows Biden ahead by 8.6%, while the Trafalgar poll shows Trump leading 49% to 47%.

However, for Biden, the road to the White House needs to go through Florida. Since the Civil War in 1860, only two Democratic candidates have lost Florida, but won – Kennedy in 1960 and Clinton in 1992.

Trump won 306 electoral votes in 2016 – 36 more than the 270 needed to be elected. That means Biden must win 37 electoral votes that Trump won four years ago. If Biden cannot win Florida, he must sweep Pennsylvania, Michigan, and Wisconsin – without losing any other states like Minnesota.

Since Pennsylvania election results promise to be complicated, let us look at Florida in depth.

Florida has 29 electoral votes – the third highest number (after California and Texas). A Biden win there would eliminate the need to win every electoral vote in the Pennsylvania, Michigan, and Wisconsin bloc. Florida also more closely reflects the nation than those states of the upper Midwest.

Since there is a difference in statewide polls, let us look at some of the critical voter groups in Florida.

The Hispanic vote is critical in winning Florida, since it represents 17% of the registered voters. Clinton won the Hispanic voter by a 27% margin in 2016 (62% to 35%). The latest polls show Biden leading in this group by 11% and 7%. Trump is at 43% which is the same percentage of the Hispanic vote that went to Republican winners Governor DeSantis and Senator Scott in 2018. (we need to reexamine Black and Hispanic polls this election in Florida)

Trump won only 8% of the Black vote in 2016. Although young Black voters between the ages of 18 and 44 give Trump 21% of their support. However, older, retired Black voters are more likely to prefer and vote for Biden.

Trump is having problems with seniors, especially those between 65 and 70. Since seniors represent 26% of the registered voters in Florida they are a critical voter bloc. Trump won the senior vote by 17% in 2016, but this poll shows Trump with only a 10% lead now.

Another poll, however, showed Trump winning the over 70 voter age group by 59% to 38%. Since 71% of Florida seniors are over 70, this may be a more important poll. However, if the younger seniors are moving towards Biden, it could negate much of the larger Trump margins in the Hispanic and Black vote.

So, what do the Florida polls show? The Trafalgar poll that was just released shows Trump ahead by 2.3%. The RCP average shows Trump with a 0.4% lead

What to Look for on election Night

If the polls prove to be inaccurate and states like Pennsylvania take days to announce results, where should one go to get a good idea of who is winning?

Each state has a Secretary of State website that will give the latest “official” results. They will be more accurate than media reports or websites that may show some bias.

Although the Minnesota polls close later, this state may be worth following as it has a similar demographic profile to Wisconsin. While Minneapolis and St. Paul are Democratic, the rest of the state is Republican. A strong Trump showing here may indicate more Trump votes nationally than the polls show. And, if Wisconsin is slow in delivering its results, a strong Trump showing in Minnesota may indicate how Wisconsin may end up.

The Wisconsin Secretary of State website would be the best choice of the three of the Upper Midwest states. Their office has historically had fewer problems with mail in ballots and they probably will have results faster than Michigan and Pennsylvania.

If you are monitoring the Florida website, remember that Eastern and Western Florida are in two time zones and the Eastern part of the state, which will close its precincts first, is more Democratic. Only after the Western part of the state has closed and has a chance to process a lot of their ballots, will there be an indication of the winner.

However, remember that there will be confusion with the massive number of mails in ballots and a plethora of legal challenges no matter how the election night results come out.

So, who do we think will win on November 3rd? This time we do believe in the general accuracy of the polls that showing Biden with a commanding lead, we think that the intangibles and historically accurate polls indicate a Biden win that could range from 275 electoral to a possible 335 electoral when the dust settle on counting all delayed votes.