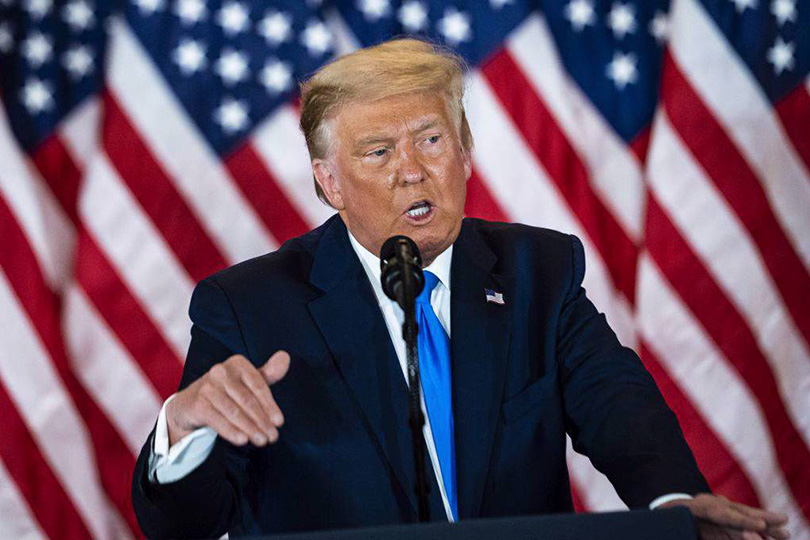 Research suggests that US President Donald Trump’s claims of fraud in the 2020 election could be a psychological strategy, deftly executed by a master manipulator. If so, the president may be paving the way to persuading large numbers of Americans to reject the legitimacy of his defeat.

US President Donald Trump, perhaps unsurprisingly, has alleged fraud in the November 3 presidential election, without offering what anyone would consider real evidence, other than the fact that votes for his Democratic challenger, Joe Biden, keep turning up in states where Trump initially led in the count. The president has already announced that he intends to take the election to the US Supreme Court, despite the fact that at the time of his statement, millions of votes in numerous states were still to be counted.

Yet Trump’s fraud claims could be part of a psychological strategy, deftly executed by a master manipulator. If so, the president may be paving the way to persuading large numbers of Americans to reject the legitimacy of his defeat.

A unique scientific study conducted the day before and the morning of the 2016 US presidential election, probing attitude changes in 1,000 US voting-age adults, found that exposure to conspiratorial rhetoric about election interference produced a profound psychological effect. In particular, it led to significantly heightened negative emotions (anxiety and anger), and also undermined support for democratic institutions.

The study, recently published in the academic journal Research & Politics, found that those exposed to conspiracy theories regarding election-rigging were less willing to accept the results of an election, and became less inclined to concede the outcome when the result threatened their partisan goals. Its authors, Bethany Albertson and Kimberly Guiler of the University of Texas at Austin, argue that vote-rigging allegations strike at the very foundations of democracy. For example, they may render the public doubtful as to whether non-violent transfers of national authority should follow from a rigged vote.

Moreover, the study contends that political conspiracy theories may have ominous, extensive, and long-lasting consequences, such as reducing political participation, trust in government, confidence in elections, and faith in democracy. Vote-rigging stories immediately after an election also can profoundly affect voters’ mental state. Besides becoming angrier and more anxious, voters in the study also reacted with increased sadness and disgust, and both Democrats and Republicans reported feeling less enthusiastic and less hopeful.

The authors suggest that the deep emotional and psychological effects they uncovered might also reflect the fact that people were on edge on election day, in a way that made both groups of partisans receptive to conspiratorial rhetoric. They conclude that Americans are vulnerable to being affected significantly by election-rigging allegations.

Throughout his presidency and the two election campaigns he has now waged, Trump has time and again demonstrated a better feel for his electorate’s mental state than the US intelligentsia and chattering classes have. The latter groups might dismiss Trump’s fraud allegations as merely the childish reactions of a sore loser, but there is a psychological method to his seemingly mad claims.

Another recent study published in Political Research Quarterly examined why so many Americans are prone to believe that electoral fraud exists. The study’s authors, led by political scientists Jack Edelson of the University of Wisconsin-Madison and Joseph Uscinski of the University of Miami, suggested that more deeply embedded conspiratorial thinking may be to blame. They point to a strong link between feelings of powerlessness and conspiracy paranoia. Supporters of the losing side in an election are therefore more likely to suspect scams. US Republicans appear especially prone to believing that people are casting votes they should not, whereas Democrats are more concerned about being disenfranchised.

But the authors argue that some measures aimed at combating perceptions of vote-rigging in the United States, such as stricter voter-identification laws upheld by the Supreme Court, could actually make things worse. Tightening voter-ID requirements leads to yet more conspiracy theories of election-rigging through vote suppression.

Finally, the authors cite a previous study of letters to the editor of the New York Times from 1890 to 2010, which reveals that disgruntled losers call nearly every US presidential election into question. Trump’s claim of fraud in the 2020 election has taken this practice to a new and potentially dangerous level, with unpredictable psychological and political consequences.

Narcissists, convinced of their superiority, can never accept losing in any contest. The threat to their ego is too catastrophic. In their eyes, no one can ever beat them fair and square. Accusations of cheating thus make perfect psychological sense. It protects the ego from the threat that losing implies. But followers may not appreciate a leader’s psychological vulnerability. Supporters and leaders can then forge a bond in their denial of an emotionally distressing result.

Biden’s strategy of passive “wait and see” may be psychologically naive, reflecting a failure to grasp the emotional power of the subconscious forces being unleashed against him. A psychiatrist might advise stronger engagement with the mental processes behind Trump’s vote-rigging claims, as opposed to dismissing them. It follows that Biden’s team should have anticipated and been more prepared – politically, not just legally – for Trump’s moves.

History has shown time and again that when narcissism, emotional distress, and denial combine and go on the march, democracy is in danger of being trampled.