France’s new president promises openness and reform from the centre 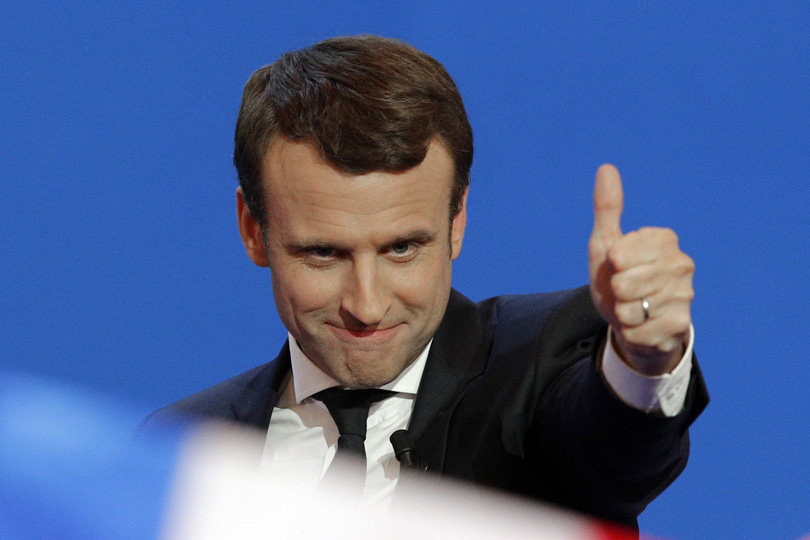 The challenge is immense. But Emmanuel Macron deserves to succeed

On May 14th, as Emmanuel Macron takes up his duties in the Elysée Palace, spare a thought for what he has already achieved. To become head of state he created a new political movement and bested five former prime ministers and presidents. His victory saved France and Europe from the catastrophe of Marine Le Pen and her far-right National Front. At a time when democracies are being dragged to the extremes by doubt and pessimism, he has argued from the centre that his country must be open to change, because change brings progress.

But spare a thought also for the difficult road ahead (see article). Mr Macron has started well, with a sober acceptance speech that evoked unity rather than triumphalism. Yet this is the first time he has been elected to public office. He begins alone in the Elysée, without the backing of any of the established parties. He trounced Ms Le Pen. But if you count abstentions, blank ballots and votes cast chiefly to keep her out, only a fifth of the electorate positively embraced his brand of new politics. Each of the past three French presidents has promised reform—and then crumpled in the face of popular resistance. Left-wing demonstrations against the new president in Paris this week hint at the struggle to come.

Much is at stake. The challenge from Ms Le Pen did not begin with this election and it will not end with her defeat. If Mr Macron now presides over five more years of slow growth and high unemployment, it will strengthen the far right and the hard left, which together got almost half the first-round vote. To put France beyond their reach, he needs to carry through vigorous economic reform. And for that, he needs first to impose his vision on French politics.

The next few weeks will be crucial. As president, Mr Macron can force through a certain amount of change by decree. But to secure thoroughgoing, lasting and legitimate reform he needs the backing of the legislature. Hence in the elections for the National Assembly in a little over a month’s time his party, renamed this week as La République en Marche! (LRM), or “The Republic on the Move!”, needs to win a big block of seats.

That is a tall order. The party is just over a year old. This is its first election. Half its candidates for the assembly’s 577 seats have, like Mr Macron, never held elected office. Its local knowledge and tactical nous are untested. There is only a slim chance of LRM winning an overall majority.

More probably, Mr Macron will have to preside over a minority government, or form a coalition, dragging him and his party into horse-trading. Having set himself up as a new sort of leader, above party politics, this could tarnish him in the eyes of his supporters, distort his priorities and limit his achievements. To minimise that, this newspaper urges French voters to complete their rejection of Ms Le Pen by backing LRM and giving Mr Macron a chance to put his programme into action.

Even if he controls the assembly, Mr Macron will face France’s most potent source of resistance—street protests and strikes. That is what happened in 1995, when Jacques Chirac, at the beginning of his first term as president, waged a battle to reform the economy. After he failed, Mr Chirac abandoned reform for his remaining decade in office. France is still living with the consequences.

If Mr Macron too has only one chance at reform, his focus should be on the joblessness that has robbed the French of hope and which feeds Ms Le Pen’s arguments that citizens are being failed by a greedy, ineffectual elite. The unemployment rate is close to 10%; for those under 25, it has been above 20% since 2009. Firms are reluctant to hire new employees because firing them is time-consuming and expensive. The 35-hour week, a thick wedge of taxes on employment and union-dominated sectoral bargaining all put firms off creating jobs. Reform needs to loosen these knots.

However, although the economics is straightforward, the politics is toxic. Each reform, much as it benefits a jobseeker, makes someone already in work less secure.

Mr Macron therefore needs to be ambitious and swift. Ambitious because you can be sure that the left and the unions will fight even small reforms as hard as large ones: if Mr Macron is to rally ordinary citizens against organised labour, he needs to make the fight worthwhile. And swift because, if reform is to succeed, now is as good a time as he will ever get. He is flush with victory. His party will start with the benefit of novelty. He can offer stimulus through apprenticeships and tax cuts. Most of all, he will be acting at a point in the cycle when France’s economy is growing—faster, indeed, than at any time since a brief post-crisis rebound in 2010. Labour-market reform takes years to bear fruit. Growth will buy him time.

Speed and ambition have the further advantage of changing the country’s position in Europe. France has lost the trust of Germany, which has taken to treating it as the junior partner in the EU. Germany is unwilling to relax further the fiscal rules governing the single currency or to strengthen its governance because, understandably, it fears that it will end up paying the bill (see Charlemagne). Yet failure in France would be a deeper threat to Germany, and to Europe as a whole. France is hindered both by austerity and by the euro’s shaky foundations. For Germany to begin to think differently, and cut France some slack, Mr Macron must first convince the government in Berlin that he is in control and determined to reform his country.

Over the past two decades, France has become used to being the butt of criticism—for its economy, its racial divisions and its resistance to change. Suddenly, under Mr Macron, it is in the limelight. And it is enjoying it.

There is a real danger that he fails—how could there not be when he is so untested? But, as the remarkable Mr Macron takes office, another future is visible: one in which he unleashes the creativity and ingenuity of the French, and sets an example for drawbridge-down democrats across the EU and lays to rest the drawbridge-up fears of his nativist opponents. That is a future this newspaper would welcome.

The End of Europe’s Chinese Dream