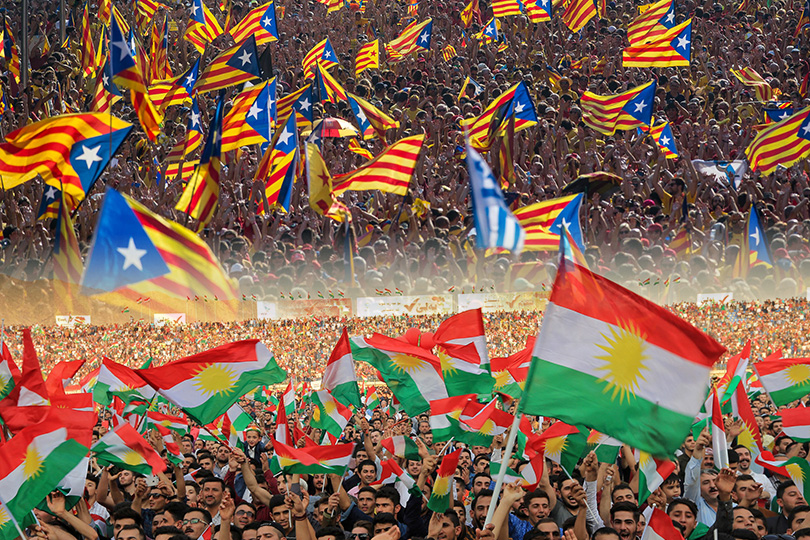 The battle for the ability to make independent choices is easier for existing small states like Qatar, the UAE and Singapore

The Gulf crisis that pits a United Arab Emirates-Saudi-led alliance against Qatar has emerged about more than a regional spat. It is part of a global battle whose outcome will determine the ability of small states to chart their own course in the shadow of a regional behemoth whether that is Saudi Arabia in the Middle East or China in Asia. It also has parallels with efforts by peoples like the Catalans in Spain, the Kurds in Iraq or Ambazonians in Cameroon to secede and form independent small states of their own that is likely to mushroom with Kurds in Syria and others likely to put forward similar demands.

The battle for the ability to make independent choices is easier for existing small states like Qatar, the UAE and Singapore that are fending off varying degrees of political and economic pressure from Big Brothers. Groups like the Catalans and the Iraqi Kurds grapple with a more fundamental obstacle: resistance by nation states like Spain and Iraq to cede economically valuable territory and an international community whose Pavlov reflex is to oppose secession.

Political scientists Alberto Alesino and Enrico Spolaore argued in a book published more than a decade ago, The Size of Nations, that both large and small states have to make cost/benefit trade-offs that determine their ability to provide populations with public goods and services and carve out their place in an international order. The integrity of larger states like Iraq and Spain whose size means that their populations are more heterogeneous is called into question by groups who feel that the state does not serve their interests and needs. Small states are either more homogenous or like Singapore find it easier to cater to different segments of a heterogeneous population but need to manoeuvre more nimbly internationally to ensure their independence.

The struggle of smaller states to escape the yoke of a regional behemoth and various groups to carve out small states of their own may have gained pace because of a realization that the benefits of being big have decreased and an expectation articulated by political scientists Sverrir Steinsson and Baldur Thorallsson that big states will grow increasingly smaller. “Thankfully for small states, it has never been as easy being small as it is in the current international system with its unprecedented degree of peace, economic openness and institutionalization,” Steinsson and Thorallsson said in a recent study entitled The Small-State Survival Guide to Foreign Policy Success.

The Gulf crisis fits the mould of smaller states seeking to carve out their place in the regional and international order, but also breaks it. At stake in the Gulf is more than just the ability of small states to chart their own course. No doubt, that is one aspect of Qatar’s refusal to bow to demands by the UAE-Saudi-led alliance that it radically alter its foreign and security policies that embraces political change for others and align them with those of others in the region.

Yet, the root of the dispute goes beyond that. The Gulf crisis is a clash of diametrically opposed strategies for the survival of autocratic rule fought in ways that threaten independence of choice of others as well as regional stability. It is a battle between two small states with massive war chests garnered from energy exports that have megalomaniac ambitions to shape a swath of land that stretches from North and East Africa into Asia in their own mould. To achieve their goals the UAE and Qatar act not as small states but as big powers, using the kind of tools big powers use: financial muscle, support of opposition forces to stimulate or engineer regime change, foreign military bases, military coups, covert wars, and cyberwar. Buried in their megalomania is a naïve belief that the consequences of their actions will not come to haunt them.

As a result, the parameters of debate sparked by the Gulf crisis about the place of small states in the international order is different when it comes to the ambitions of Qatar and the UAE as opposed to countries like Singapore who rely more on soft power, opt to fly more under the radar, and stick more to strategies generally associated with small state efforts to ensure their independence of choice.

What Singapore, Qatar and the UAE have in common however, is that their quest to jealously guard their ability to chart their own course is driven by fear. Singapore’s fear, unlike that of Qatar and the UAE that face very different demographic challenges involving citizenries that account for only a small percentage of the population, is grounded in race riots surrounding its birth, the perception of living in a volatile neighbourhood, and concern resulting from the fallout of convoluted transitions that have wracked the Middle East and North Africa and fuelled religiously-inspired militancy.

While all three states are in some ways corporations, Singapore in contrast to Qatar and the UAE, has institutionalized its system of government to a far greater degree than the Gulf states in terms of institutions, the rule of law, and checks and balances irrespective of its warts. Qatar has so far ignored the opportunity offered it by the wave of unprecedented nationalism unleashed by the Gulf crisis as Qataris rallied around the ruling Al Thani family that accounts for 20 percent of the citizenry in a nation of 300,000 nationals. As a result, debate in Singapore focuses on survival as an independent state rather than survival of a ruling family. In Singapore, the debate about what it can and should do to stand up for its interests is public; in Qatar and the UAE far more repressive restrictions on freedom of expression stymie debate or drive it into clandestinity.

Similarly, Qatar and the UAE project themselves as regional and global hubs that are building cutting-edge, 21st century knowledge societies on top of tribally-based autocracies in which education, in contrast to Singapore, is designed to ensure that citizens have marketable skills and can interact globally rather than develop the skills of critical thinking that could result in criticism of their regimes. While there is no public debate in either Gulf state about governance, Singapore’s transition away from the Lee family’s dominance and to a post-Lee generation is one that is cushioned by discussion and expression of aspirations.

Both Qatar and the UAE have glimmering and bold skylines that rival that of Singapore. But beyond the trappings of modernity, neither are states that empower their citizens. The limitations of modernity are evident. Criticism after Qatar won the 2022 World Cup hosting rights of its controversial labour regime that governs the lives of migrant workers, a majority of the country’s population, did not resonate among Qataris, largely because of the country’s demographic deficit. In fact, Qataris protested in 2009, when some households hired Saudis as maids, yet never raised their voice about the widespread abuse of Asian maids. Saudi unlike Asian maids were too close to home. If Saudis could be reduced to the status of a maid, so could one day Qataris pampered by a cradle-to-grave welfare state.

Qatar and the UAE share building blocks of soft power creation and the manufacturing of national identity some of which are also employed by Singapore. They include foreign military bases; world class airlines that service global hubs; museums that both attract tourism and manufacture a national heritage; high profile investments in blue chips, real estate and the arts, sports and the ambition of becoming centres of excellence in multiple fields.

While political Islam plays a less important role in Singapore’s management of its heterogeneity, Qatar and the UAE have adopted radically different approaches even though both have developed societies in which religious scholars have relatively little say and Islamic mores and norms are relatively liberally interpreted. This, however, is where the communalities in their survival strategies stop. Whereas Qatar embraced support of political Islam, the UAE has opted to suppress it. Nonetheless, both states project their approach as part of their effort to garner soft power.

As a result, the UAE has backed regime change in a number of countries, including Egypt and reportedly Turkey; supported anti-Islamist, anti- government rebels in Libya; joined Saudi Arabia’s ill-fated military intervention in Yemen; and in the latest episode of its campaign, driven imposition of a diplomatic and economic boycott of Qatar.

In contrast to the UAE, Qatar has sought to position itself as the regional go-to go-between and mediator by maintaining relations not only with states but also a scala of Islamist, militant and rebel groups across the Middle East and northern Africa. It moreover embraced the 2011 popular Arab revolts and supported Islamist forces, with the Muslim Brotherhood in the lead, that emerged as the most organized political force from the uprisings. Qatar’s support for the Brotherhood amounted to aligning itself with forces that were challenging Gulf regimes and that the UAE alongside Saudi Arabia was seeking to suppress. Qatar did so in the naive belief that it could encourage transition everywhere else without the waves of change washing up on its own shores.

What puts the Gulf crisis in a bracket of its own in the discussion about the place of small states in the international pecking order is the fact underlying the crisis are issues that go far beyond the debate. One root cause of the crisis is Qatar and the UAE’s radically different definitions of terrorism that is enabled by the international community’s inability to agree on what does and does not constitute terrorism and anchor that agreement in international law. The failure to do so fuels differences in perceptions of national security threats, undermines governments’ ability to effectively combat political violence, and allows them to shy away from advancing greater accountability and transparency, and ensuring protection of basic human rights.

As a result, the Gulf crisis has a pot blaming the kettle quality. It pits autocracies against one another. None of the protagonists advocates a more liberal system of government for its own people. Their differences are rooted in their histories of independence and concepts of national security that are defined by geography and differing threat perceptions.

Qatar, the UAE and Singapore are all unique in their own ways. In many ways, they don’t fit the mould of the world’s average small state. Yet, they all offer lessons for other small states or territories aspiring to join the international community as independent countries. Singapore, unlike Qatar and the UAE has established itself as a model of good governance and of a small state that turned the liability of having no resources but its human capital into an asset. The UAE has so far succeeded in positioning itself as the small state most capable of punching above its weight. Qatar has become the example of a small state capable of resisting heavy external pressure. Ultimately, however, Singapore may prove to have a more sustainable survival strategy by grounding it in institutions, performance and human capital rather than the wielding of financial muscle in an effort to shape the world around it in its own mould.