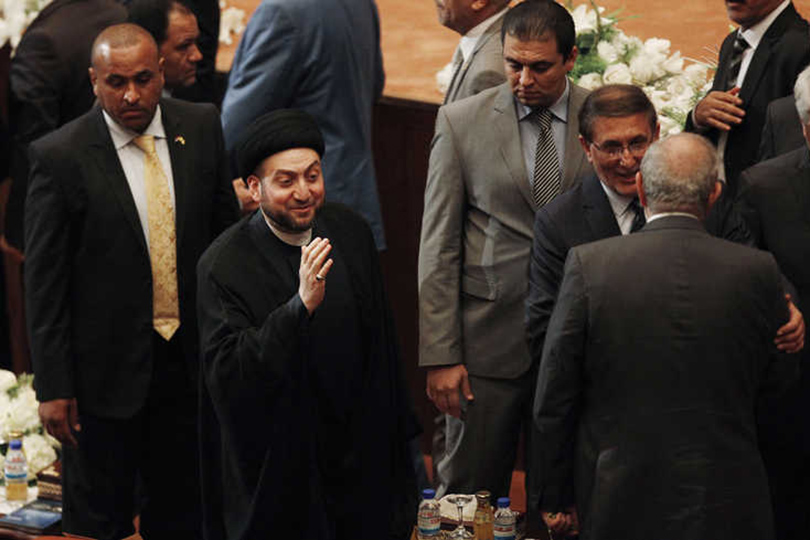 Ammar al-Hakims National Wisdom Movement, which once supported Adel Abdul Mahdi for the premiership, has turned against the prime minister, organizing protests against his government.

Thousands of followers of Ammar al-Hakim, the leader of the opposition National Wisdom Movement, took to the streets on July 19, in 14 Iraqi provinces, to protest the government of Prime Minister Adel Abdul Mahdi. The protests mark the Wisdom Movement's first protest against the government, as well as the first time protests have been mobilized concurrently across 14 provinces since 2003.

Hakim and his movement, known as al-Hikma, opted to oppose the government a few weeks ago. The movement had called for a million people to protest, but the turnout was much lower than what Hakim and his political bureau expected.

On the day of the protest, Iraqi media revealed the text of a letter from Abdul Mahdi to Hakim. The letter was signed July 17, two days before the protests.

Abdul Mahdi warned Hakim against adopting the framework of pro-government and opposition factions, stating that it was not a trait of democracies. “This principle would yield outcomes similar to the March 8 and 14 [factions] in Lebanon,” he wrote, in reference to the dispute between political parties in Lebanon loyal to Hezbollah leader Hassan Nasrallah and Prime Minister Saad Hariri.

Abdul Mahdi tried to undermine Hakim's choice to stand with the opposition. Ammar al-Hakim, the heir to the Hakim family, was still young when Abdul Mahdi led the Islamic Supreme Council.

The central issue is not the letter, but the letter's dissemination in the media. Abdul Mahdi personally delivered the letter to Hakim during an unannounced visit on the eve of the protests, as per sources in Hakim’s office.

Sources told Al-Monitor, “The letter was leaked from the prime minister's office to embarrass the National Wisdom Movement, as Abdul Mahdi insinuated in the letter and during the meeting to the need to delay the protests.”

Iraqi parliamentarian and al-Hikma member, Khaled al-Jashaami, told Al-Monitor, “The protests fulfilled their purpose, as they pushed people to express themselves and ask for their rights. The National Wisdom Movement became the voice of the people in defending their rights during protests or in parliament.”

Jashaami added, “It seems Abdul Mahdi is not satisfied with our opposition, or is irritated by it, although in his previous articles he explored the opposition option. His letter was suspicious of the opposition and tried to claim we are part of former governments, which we did not deny.”

Other political parties close to Iran criticized the protests before and after they were staged. Parliamentarian Hassan Salem, of al-Sadiqoun bloc, said the protests were “a failure … and did not live up to the media hype that preceded them. Many people did not show up because they knew the ulterior political motives.”

The National Wisdom Movement is a Shiite party and its chances of building a popular base in Sunni areas is nearly nonexistent. Yet it staged protests in Sunni areas like Ninevah, Salahuddin and Anbar — an unprecedented move. So far, we still do not know whether those who participated in protests in those areas support the movement and its goals.

The National Wisdom Movement's protests, in the past, have utilized dubious methods to motivate the public. They have been accused of paying people to participate in protests. Taha Abdel Ghani, a member of the Anbar provincial council, said July 20 that the “office of the National Wisdom Movement in Anbar summoned a group of youths during the opening of its office to appoint them to distribute money and aid to young people. The opening ceremony soon turned into a protest that security forces dispersed.”

The National Wisdom Movement is trying to organize more protests “with new methods that have not been revealed yet,” said Amine Wahab, head of the movement in the Basra provincial council.

Hisham Daoud, an Iraqi researcher at the French National Center for Scientific Research, told Al-Monitor, “The National Wisdom Movement is trying to play the role of legitimate political opposition," yet it faces a "public opinion that doubts this opposition faction despite its open, modern and young-spirited discourse. However, the movement’s mobilization base is limited and its experience is weak."

He added, “The most important component of the prime minister’s letter is that he described his government as a product of an internal, regional and international settlement and said it was fragile, dangerous and threatened. Nobody knows about the influential figures of the National Wisdom Movement and the Supreme Council as much as Abdul Mahdi. His letter that addressed Hakim in an educational manner is just a way of announcing a complete boycott for this religious-political family,” meaning, the Hakim family.

Daoud said, “The letter was widely criticized because it did not contain suggestions or even indications of overcoming the current crisis.”