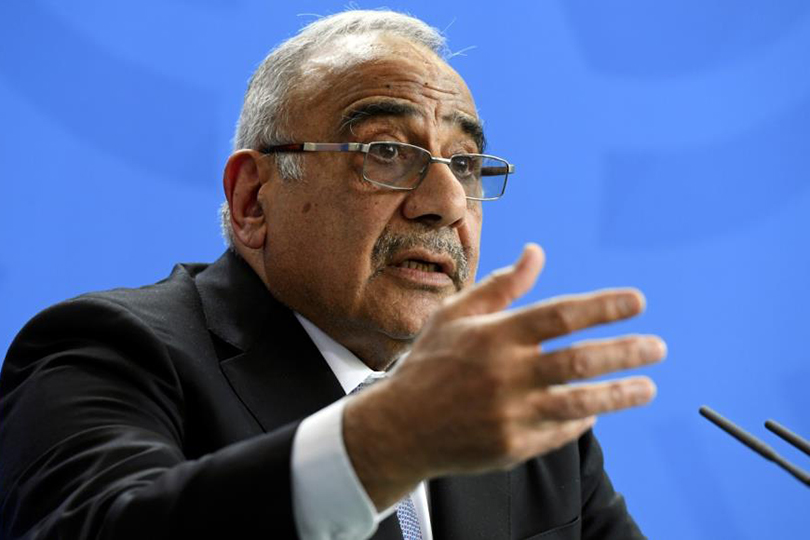 The two biggest political blocs formed in Iraq after the 2018 parliamentary elections are pressuring Iraqi Prime Minister Adel Abdul Mahdi to not resign, despite the protests that have gripped Iraq since the beginning of October.

Abdul Mahdi became prime minister after a consensus was reached between the Fatah Alliance, headed by Hadi al-Amiri, and the Sairoon Alliance, headed by Muqtada al-Sadr. Both alliances are linked to Iran, yet, since the Sairoon Alliance appears to take decisions independently from Iran, the latter's ability to pressure the bloc into working for its agenda in Iraq is limited.

Abdul Mahdi addressed the Iraqi people the morning of Oct. 4, yet the speech was broadcast three hours late. The delay was due to a “meeting that Abdul Mahdi was holding with the leaders of the political blocs,” according to sources close to Abdul Mahdi.

“Abdul Mahdi brought up his resignation plan during a meeting with the head of his political bureau and negotiator Abu Jihad al-Hachimi; the negotiator on behalf of Sairoon, Nassar al-Rubaiee; and leadership from other political parties," the sources said. "Yet Hachimi and Rubaiee refused Abdul Mahdi’s proposition.”

They added, “Rubaiee, who is close to Muqtada al-Sadr, informed Mahdi that this was not part of the agreements he made to get to his current position as prime minister. The news of his resignation also reached the Fatah Alliance, which is close to Iran. Abdul Mahdi received a message from the commander of the Quds Force, Qasem Soleimani, asking him to refrain from resigning and proceed in the direction of issuing a ministerial amendment.”

Through its allies in Iraq, Iran is trying to keep Abdul Mahdi’s government in power because it is pro-Iran. Tehran considers Abdul Mahdi’s position an opportunity to benefit from Iraq and withstand the US sanctions, especially given Abdul Mahdi's sympathies for Iran and the power that the people close to Iran have over Abdul Mahdi’s office and entourage.

Political analysts believe that Sadr’s and Amiri’s alliances are keeping Mahdi in power for pragmatic reasons, even though Sadr asked Abdul Mahdi's government to resign in an official statement. Yet Sadr's statement contradicted the message his negotiators brought to Abdul Mahdi.

Liqaa Maki, a senior researcher at Al Jazeera Center for Studies, told Al-Monitor, “It was expected for the Fatah Alliance to refuse the resignation, yet Sairoon’s refusal is questionable, especially since its leader, Sadr, had asked the government to resign before disappearing.”

He said, “In all cases, this refusal could be seen from two angles. The first is that there is no consensus on who would replace Abdul Mahdi, and — given the circumstances — a void in the prime minister's position would be dangerous and unacceptable. The second angle is that Iran believes Abdul Mahdi to be the best option currently, because the man has good ties with Tehran. These ties date back to the formation of the Council of the Islamic Revolution in 1982 in Iran.”

Maki added, “Iran’s interest in Abdul Mahdi goes deeper than the historical ties. He is the best at keeping Tehran’s interests. Meanwhile, his ties with the United States are bad. He is also able to act as a mediator between Tehran and certain Arab countries like Saudi Arabia, so Tehran will not allow him to step down for the moment.”

A source close to Abdul Mahdi who represented Fatah during ministerial talks told Al-Monitor, “Abdul Mahdi believes that the protests are a conspiracy to bring him down. We will not accept his stepping down. It is not up to him alone to decide that, especially during this period. Mahdi is targeted, and we will not allow this.”

Parliamentarian Intisar al-Musawi of the Fatah Alliance challenged the political blocs’ capacity to make Abdul Mahdi resign. It is clear from her statement that Abdul Mahdi’s position is not in the hands of Fatah or Sairoon.

Raed Hachem, a consultant at the Iraqi Institute for Strategic Studies, told Al-Monitor, “In the first few hours of protests, Abdul Mahdi was preparing his resignation. Later, he was subjected to Iranian pressures imposed by the head of his bureau, Abu Jihad, and Fatah Alliance members in general.”

He added, “Abdul Mahdi prepared his resignation twice, but it was refused by Iran, especially the second time, after Iran said that the United States is backing the protests. Iran does not want Abdul Mahdi to give in to the wave of protests.”

Refusing Abdul Mahdi’s resignation sends a message that the sixth Iraqi prime minister since 2003 is not controlled by political factions. He is actually linked to two political forces — the Fatah and Sairoon alliances — and cannot even make a decision about his personal political career.

Abdul Mahdi is left with one option: to remain in the position of prime minister for at least six more months, until a new wave of protests is likely to start in early summer. During those months, the Fatah Alliance will look for a replacement if Abdul Mahdi still insists on resigning.