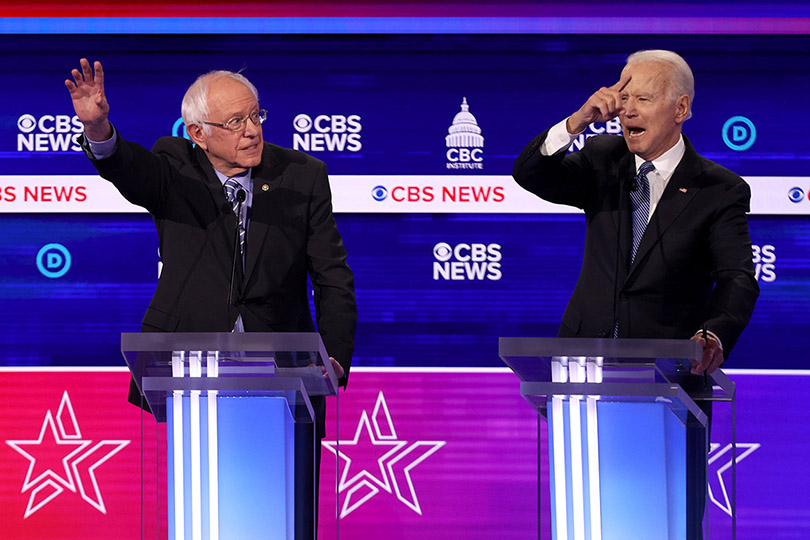 There is an old political adage that says, “a week is an eternity in politics.” That adage was no truer than this week. A week ago, Vice President Biden’s bid for the Democratic presidential nomination seemed dead. His showings in the New Hampshire primary and the Iowa and Nevada caucuses were dismal. Major Democratic donors were sitting on the sidelines, which left the Biden campaign without the money to contest important states like Texas. And, his verbal gaffs on the campaign circuit created questions about his ability to mentally handle the office of president.

All that changed in the last few days.

On Saturday, Biden won the South Carolina primary thanks to overwhelming Black support. Within a day, candidates Buttigieg and Klobuchar had pulled out of the race and had endorsed Biden – followed by several other prominent Democratic politicians like Beto O’Rourke.

The momentum of the weekend led to a surprising win in the Super Tuesday primary elections. As of this writing, although Biden hasn’t sewn up the nomination, he is leading by a comfortable margin and has over 50% of the delegates pledged.

That win was followed on Wednesday by the withdrawal of candidate Bloomberg, who endorsed Biden. On Thursday, Warren pulled out.

Although Biden doesn’t have the 1991 delegates to guarantee a first ballot win at the convention, his road to the nomination seems much clearer. With only Sanders to seriously contest the nomination, the chances of a “brokered” convention are nearly impossible. And, even if the convention is brokered and Biden doesn’t win on the first ballot, he is nearly assured victory in the second ballot by the super delegates who overwhelmingly support Biden.

The upcoming primaries don’t provide much hope for Sanders to overcome Biden’s lead. The March 10, primaries are in Idaho, Michigan, Mississippi, Missouri, and Washington. Of those, only Washington and maybe Michigan appear to be in the Sanders column. The rest are probably going for Biden.

On the positive side for Sanders, the upcoming states holding primaries has more - White and more Hispanic – groups that did give Sanders more support

If Sanders can stop Biden’s momentum on March 10, the March 17th primaries of Arizona, Florida, Illinois and Ohio may help get him back in the race. However, with the democratic rules that split up the delegates according to the percentage of support each candidate gets, Sanders must manage to get some major wins in order to overcome Biden’s lead in delegates.

Sander’s problem is that there aren’t any other serious candidates that can siphon off votes from Biden. And, he needs another viable candidate in the race in order to create a brokered convention.

Although the primary season goes into June, it’s possible that the eventual winner will be clear by the end of March.

Although Biden’s comeback was the big story coming out of Super Tuesday, the Democratic leadership who backed Biden can’t afford to ignore Sanders. Sanders did win the biggest prize, California. He also earned enough votes to win delegates in every state that Biden won – even though Senator Warren siphoned votes from him.

Biden can’t expect a victory like Super Tuesday every week. Super Tuesday had a preponderance of Southern states (the old Confederacy) that are more conservative and less likely to support Sanders.

There is also the fact that the upcoming primaries have more Whites and Hispanics, which are more likely to vote for Sanders. The problem is that the demographics of the likely voter in the upcoming primary states probably will not be enough to overcome the current Biden lead.

The Democratic leadership is concerned that a more radical presidential candidate like Sanders would hurt the party in local elections as well as the US Senate and US House. In their mind, it’s better to lose the White House with a moderate candidate yet, retain its majority in the House.

However, there is a sizable minority in the Democratic Party that envisions a more democratic socialist Democratic Party like those in Europe. They also want to overthrow the establishment Democrats that currently run the party. And, Biden’s win will not mend that divide.

Therefore, it’s possible that Biden may come to the Democratic convention with enough votes to win the nomination on the first ballot, but face an upset minority that supports Sanders and feels that the nomination was taken from their candidate, as it was in 2016. These Sanders voters may decide to stay home in November and hope that they can take over party leadership with a new generation of politicians like New York Congresswoman Cortez.

In other words, while this is probably Sanders last run for president, it isn’t the last time that democratic socialists will be heard from.

Although Bloomberg pulled out of the race on Wednesday, he has won one distinction – howbeit a humiliating one. He has beaten John Connally for the distinction of spending the most money for fewest delegates. Former Texas governor Connally had spent $11 million for one delegate in the 1980 Republican primary. As of the time of this writing, Bloomberg had won 50 delegates after spending $700 million (the delegate count should give Bloomberg more delegates in the next few days).

Bloomberg had misread the Trump victory in 2016. He assumed that a large personal fortune that could be spent on the campaign would insure victory. As a result, he saturated the airwaves, including the expensive California market, with commercials for the last month.

But he had little to show for it but the victory in the small American Pacific territory of American Samoa. He had forgotten that a candidate needs an agenda in addition to media coverage.

It also helps to make a good impression in the debates. Bloomberg, however made a poor impression on the debate stage as the other candidates ganged up to attack him.

Although Bloomberg is out of the race, he is expected to remain active, using his personal fortune to help defeat Trump.

Although the Bloomberg money will help the Democrats this year, it is offset by the lack of donations to the Democratic National Committee this year. There is also the fact that Americans don’t like the idea of anyone “buying” the election. Consequently, Bloomberg may waste hundreds of millions of dollars more in a vain attempt to defeat Trump in November.

Warren has pulled out of the race, thanks to a poor performance across the nation, including her home state of Massachusetts, where she lost to Biden. The reality, however, is that Warren had no path to victory.

Warren did poorly with demographic groups that she counted upon. Exit polls showed that only 1 in 10 women in Massachusetts voted for her and only 1 in 5 college educated Whites in the state supported her.

Her future, post campaign, is uncertain. As a woman, she would be a logical VP choice for Biden and may help bring pro-Sanders democratic socialists back into the Democratic Party camp.

As we noted at the beginning, a week is an eternity in politics. That means that any attempt to analyze the future may prove wrong within a week.

Assuming Biden retains his lead in delegates, he will be the nominee – either on the first or second ballot. However, his victory may not bring about a Democratic victory in November.

There is also the question of Biden’s suitability as a presidential candidate. As the former Vice President, Biden should have sewn up the nomination months ago. However, his missteps on the campaign trail have worried many in the Democratic Party. During campaign stops he has often forgotten what state he is in and what office he is running for. As a result, many observers think that he may be showing signs of mental degeneration.

Picking an outsider for the nominee is a threat to the leadership. Someone like Sanders will oust many current Democratic leaders and install his own supporters if he wins the nomination.

On the other hand, Biden has made it clear that he is sticking with the status quo and political leaders like Speaker of the House Pelosi.

There are also troubling signs that the Democratic majority in the House may be in jeopardy – another reason to back Biden. The California congressional primaries on Tuesday showed that Republican voters in Republican congressional districts that had flipped Democratic in 2018 outnumbered Democratic voters, even though there was no Republican presidential primary.

While a Biden candidacy may help the Democrats in the House, there is also the issue of Biden’s mental condition. If he is elected and his mental condition continues to decline, there is a chance that a move to oust him by using the 25th Amendment may take place. In that case, the choice of a vice presidential nominee at the Democratic Convention may be critical.

Normally, VP choices are made to “balance” the ticket. Biden may want a more democratic socialist VP – preferably one that is a woman and a minority. Senator Kamala Harris of California would be a choice that might energize women voters and Blacks, although she is from the strongly Democratic state of California. Senator Warren of Massachusetts could also be a possibility. Both would also help pacify the democratic socialist wing of the party too.

Both women, however, would not be the favorite VP candidate for the Democratic Party establishment, which sees both of them as far left outsiders like Sanders. If one of them succeeds Biden as president, they will likely replace the current Democratic leadership.

A more logical choice for a VP that could take over for Biden and retain the current Democratic leadership might be a Democratic governor from a state that Biden needs to win in November. He could take a more active role in a Biden Administration and be a good successor if the 25th Amendment is used.

All of these are questions that must be answered by the end of the Democratic Convention in July.