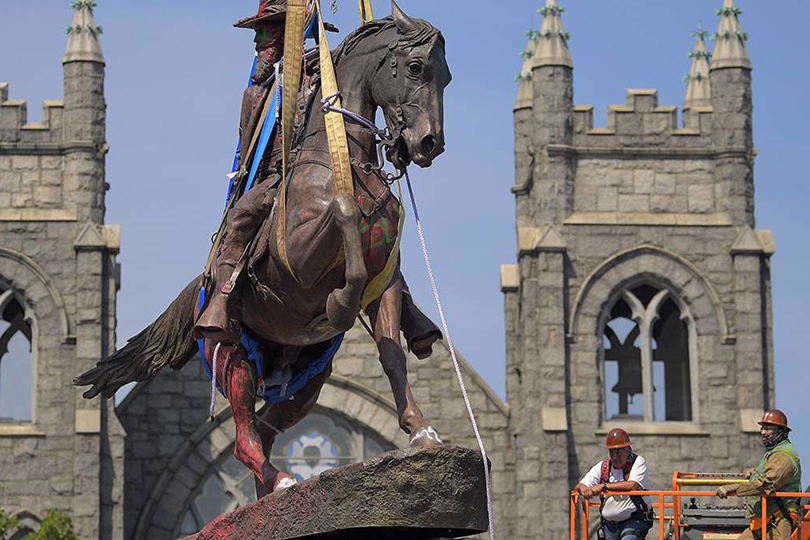 When history becomes worth fighting over, it begins to exist. And, crucially, the fight is now occurring in the mainstream of American media, politics, and culture, rather than on the fringes of academia, as in the past.

Henry James once reportedly said, “If you scrape Europe, you will find history. If you scrape the United States, you will find geography.” This lack of a shared sense of history in America is on stark display today in the protests over deep-rooted racial injustice and debates over the removal of Confederate monuments and names honoring racist political leaders.

Compared to others, Americans’ shared history is very short. Those who colonized – and later immigrated to – North America had a variety of motives, whether religious, political, or economic. But in virtually every case, they were fleeing their past.

When they arrived in the New World, the settlers did not latch onto an indigenous history or culture. Native Americans were nomadic, unstructured, and isolated, and had scant contact with the English or Dutch settlers, who established their own colonies on the lands they appropriated and effectively hit the “reset” button on their history.

But the story is more complicated still. In the early seventeenth century, when tobacco emerged as a cash crop in Virginia, the settlers purchased slaves from Africa. The slaves’ African history was extirpated, but their experience of the New World was very different from that of the slave owners.

This meant that when the US achieved independence in the eighteenth century, it lacked a common foundation. To paraphrase Tocqueville, the US was born late, and without a history at the outset. In fact, the country had no shared memory to speak of until the late nineteenth century, after George Bancroft wrote a history – one way, as Jill Lepore has noted, to turn a state into a nation-state.

But the US still lacked some of the mythic pillars of nationhood: a common origin, a common past, and a common path from past to present. And what individuals or societies lack, they tend to neglect. That is why, while Americans often cite a few foundational myths, historical perspective rarely appears in public discourse or political rhetoric, let alone everyday conversation.

This carries over to the highest levels of decision-making – with serious consequences. Consider foreign policy. The history of Vietnam – from its conflicts with China centuries ago to its resistance against the French beginning in the 1920s – should have convinced Presidents John F. Kennedy and Lyndon B. Johnson to resist involvement in the Vietnam War. Likewise, Afghanistan’s history – beginning with the long list of foreign invaders who have been subdued by its geography – should have showed President George W. Bush that launching a full-scale war there was futile. In both cases, US leaders and their advisers knew the history, but disregarded it.

To be sure, countries with both longer histories and a more developed sense of history have also found themselves bogged down in interminable wars; France’s catastrophic adventures in Vietnam and Algeria are a case in point. And there is no guarantee that a more history-conscious US would have avoided its mistakes in Vietnam or Afghanistan.

But, without history, Americans are missing something – and they seem to feel that. They have sometimes invented the history they lack, transforming individuals or events into monuments, celebrations, and remembrances, often long after they lived or occurred. Almost all of the statues honoring Confederate figures throughout the American South – there are more than 700 – were erected after Reconstruction and as late as the 1950s.

Today, Americans are increasingly recognizing and highlighting the inconsistencies in the stories they have been told, especially with regard to race. This has become fuel for today’s political, ideological, religious, and ethnic clashes over the truth about – and meaning of – America’s past.

The current historical controversies mainly involve the Civil War and slavery. But they extend to many other episodes, including the decimation of Native American communities, the Japanese internment camps during World War II, and the Chinese Exclusion Act.

A crucial battleground for these history wars is school textbooks. For example, in some school districts, Advanced Placement US History textbooks affirming that the Civil War was waged primarily over slavery – specifically, the desire to preserve an economic system that depended on forced labor – have been banned. The textbooks these districts use insist that the fight was really over states’ rights.

The mythification of the 1836 Battle of the Alamo has been similarly contested. In Texas, the story has become emblematic of so-called Texan freedom fighters’ “heroic” resistance to oppression and their struggle for independence from Mexico. And that is how it has long been taught in the state’s schools.

But this interpretation ignores what the Alamo’s defenders were fighting for: an independent republic where they would have the right to own slaves. (At the time, more than a quarter of the state’s English-speaking population was enslaved, and the share was growing.) Indeed, the supposed “heroes” were mostly mercenaries, responding to calls from New Orleans slave merchants and, covertly, from President Andrew Jackson, who sought eventually to annex the territory.

That is why, in 2018, working groups of educators and historians advised the Texas State Board of Education to eliminate the term “heroic” from seventh-grade textbooks. After a lengthy and passionate debate, however, the term was retained. There had been too much pushback from Texas Governor Greg Abbott, among others.

Although nothing changed in that case, when history becomes worth fighting over, it begins to exist. And, crucially, the fight is now occurring in the mainstream of American media, politics, and culture, rather than on the fringes of academia, as in the past. One hopes that today’s debates amount to more than partisan fireworks and, instead, herald the advent of history in the American narrative.