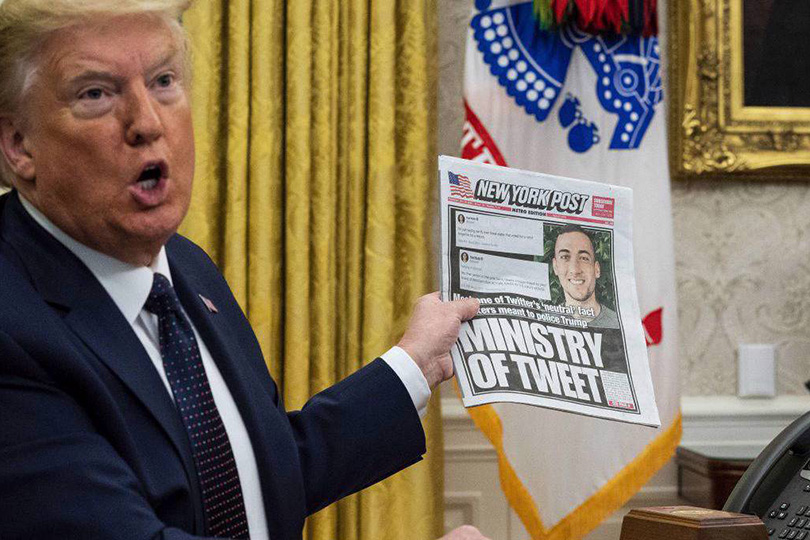 Efforts to remove Donald Trump’s online platform have been widely praised as crucial to mitigating the risk of further incitement of violence. But recent psychological research suggests that excluding Trump from social media will not make America safer – and could even increase the risk of violence.Social-media platforms are finally turning on Donald Trump. Since the US president incited a violent attack on the Capitol on January 6 that left five people dead, platforms ranging from Twitter (long his preferred megaphone) to Shopify (on which he sold merchandise) have banned him. And Parler – the unmoderated platform that has become the new darling of the far right, and Trump’s likely refuge – has temporarily shut down after Amazon booted the site from its web-hosting services.

Efforts to remove Trump’s digital platform have been widely praised as crucial to mitigating “the risk of further incitement of violence,” as Twitter’s statement put it. But will excluding Trump from social media really make America safer? Recent psychological research suggests that the answer is no. After all, narcissists do not respond well to social exclusion.1

To be sure, there is considerable debate over whether that label fits Trump. Section 7.3 of the American Psychiatric Association’s Principles of Medical Ethics – commonly known as the “Goldwater rule” – is clear: Clinicians should refrain from opining publicly on the mental health of public figures whom they have not personally examined.

But many psychologists and psychiatrists have diagnosed Trump anyway, concluding that he is a textbook narcissist. In 2017, 27 psychiatrists and mental-health experts even published a book warning that Trump’s mental state – including his narcissism – presented a “clear and present danger” to the United States.

It is not hard to see why. Narcissism involves unusually high needs for praise and admiration, combined with an inflated view of one’s own capabilities or “specialness.” It is the personality type least likely to accept defeat, such as in an election. A narcissist cannot admit they are less popular than someone else – such as, say, their predecessor – or that an adversary got the better of them.

If forced to confront such uncomfortable realities, narcissists tend to feel threatened and lash out aggressively. Social exclusion would hurt anyone. But for a narcissist, it is unbearable – and likely to trigger a violent reaction.

Moreover, the risk extends beyond Trump himself, because there is little doubt that many of his supporters exhibit narcissistic tendencies. Multiple studies have confirmed as much, including one published last October by Joshua Hart and Nathaniel Stekler of Union College.

One reason why narcissists are more likely to support Trump, Hart and Stekler argue, is that he is “a quintessential narcissist,” and “people tend to gravitate toward others, including leaders, who are similar to themselves.” More broadly, narcissism reflects a “blend of insecurity and grandiosity” that predisposes individuals to right-wing authoritarianism and social dominance – both of which, the authors argue, are “ideologically consonant with political conservatism and especially Trump’s specific version of it.”

Other research has shown that, in recent decades, the prevalence of narcissistic personality traits has increased significantly throughout the US population. Some blame this trend on the rise of social media, although the evidence so far is inconclusive.

In any case, it is clear that Trump has used social media to build up a personality cult with a disproportionately narcissistic following. But banning Trump from social media will not undo the damage. At best, the move amounts to closing the stable door after the horses have bolted. At worst, it will spur the horses to start kicking even harder.

Researchers have linked narcissism to a number of anti-social behaviors, such as aggression, domestic violence, and sexual coercion. One recent study, by a team led by Victoria Blinkhorn of Liverpool John Moores University, showed that people scoring significantly higher for narcissism view violence more positively. Although men were more likely to score high, narcissistic women were as accepting of violence as their male counterparts were.

So, the assault on the US Capitol may have been rooted at least as much in the psychology of narcissism as in politics. If so, socially ostracizing Trump and his supporters could make matters much worse. In fact, another recent study co-authored by Blinkhorn found that narcissists may be more supportive of violence after facing social exclusion, especially if they receive “explicit cues of ostracism.”

If shunning narcissists only channels their emotional pain into increased aggression toward others, it is vital to ensure that violence is not the only cathartic outlet available to them. Joining with like-minded people, whether at political rallies or in online communities, can help narcissists avoid confronting feelings of weakness or vulnerability.

The danger, then, is that ignoring behavioral science and banishing Trump and many of his far-right supporters from social media might be riskier than allowing them to continue engaging in closely moderated discussions in which comments that incite violence are removed. The narcissist mindset implies a psychological defense strategy generating physical violence. So while those online discussions may be problematic, they could provide the digital equivalent of a pressure valve, allowing narcissists to let off steam – and thereby preventing a deadly explosion.