How close does the Ukraine scandal bring Donald Trump to impeachment? 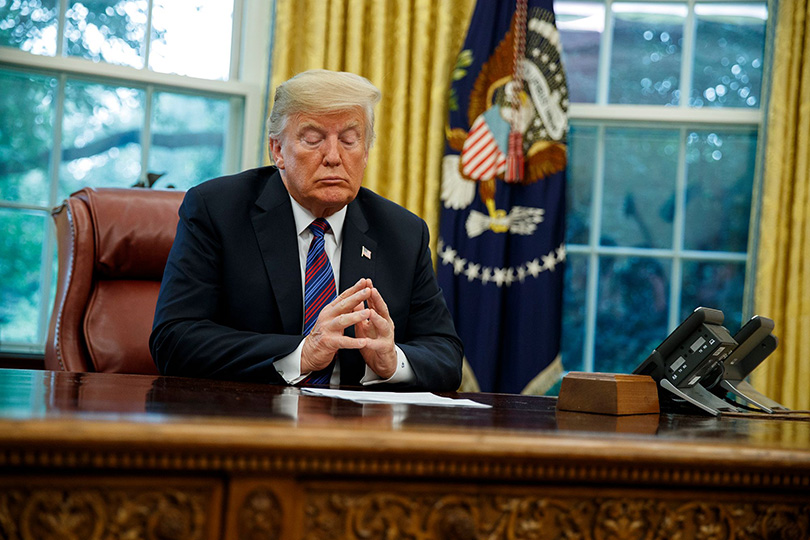 Each Trump administration scandal is different, but the questions they invite are the same. Has another president done something similar before? Does this scandal involve a breach of the law, or merely of norms and precedent? Where does this rank on the Trump-o-Meter, with fibbing about the size of the crowd at his inauguration at one end and obstruction of justice at the other? Finally, if you heard that a president had done something but you were not told which president, how would you judge the behaviour? If Donald Trump did indeed put pressure on the president of Ukraine, Volodymyr Zelensky, to produce material that would embarrass a political rival, might that be the worst Trump scandal yet, as Max Boot, an ex-Republican who is generally a reliable guide, wrote in the Washington Post? Or is it not even worthy of comment, as most Senate Republicans seem to believe—at least in their public statements?

Begin with what we know. In August the government of Ukraine received news that the White House had frozen a package of military aid to the value of $250m. This was unexpected because Congress had already appropriated the money, and because the aid supported America’s interests in Ukraine, which are to see a country that is as peaceful and stable as possible. A month earlier, Mr Trump had spoken to Ukraine’s newly elected president to congratulate him on his election win. Something said by Mr Trump in that call reportedly gave rise to a formal complaint from a whistleblower in America’s intelligence services. We do not know for sure what that something was, but the Wall Street Journal has reported that Mr Trump asked Mr Zelensky about eight times during the call to investigate Hunter Biden, the son of the Democratic front runner for the presidential nomination, who had business interests in Ukraine. Mr Trump has recently admitted that he raised the issue of corruption with Mr Zelensky.

The contents of that call were probably part of the whistleblower’s complaint, which itself is now at the centre of a wrangle between the White House and Congress. The law states that such reports are passed from the Office of the Director of National Intelligence to Congress. The Trump administration is arguing that the law has been incorrectly applied, and that in any case, the president’s calls with foreign leaders should enjoy executive privilege. The administration may offer a compromise of sorts, by releasing the transcript of the call but not the whole of the whistleblower’s report.

That would not clear the matter up. So far most of the focus in the American press has been on the contents of that one phone call. Was the freezing of the money explicitly linked to the investigation of Hunter Biden? Probably not. The Economist’s reporting suggests that the call was characteristically Trumpian, but that there is no smoking gun in the transcript. A former lawyer to the president, Michael Cohen, has spoken of how he often makes his wishes plain without making explicit requests or orders.

From the Ukrainian perspective, the main channel through which Mr Trump applied pressure to help him out politically was via his personal lawyer, Rudy Giuliani. Shortly after the call between the two leaders, Mr Giuliani travelled to Madrid to meet an adviser to Mr Zelensky, Andriy Yermak. He urged the Ukrainian government to investigate the younger Mr Biden and dangled the possibility of a state visit to Washington, DC, as an inducement. Mr Giuliani has since said that he was acting merely in his role as the president’s private lawyer. But this distinction, if it existed, was lost on the Ukrainian government.

The reason this scandal rises above the level of Mr Trump’s others is that, on the face of it, the president appears to have acted against America’s national interest—by freezing aid to a vulnerable ally—in order to pursue a vendetta against a political rival at home. If the administration suggested that the military aid would come if Ukraine’s government investigated the younger Mr Biden—if you give us the dirt we give you the guns—that would be tantamount to extortion.

Even without such an explicit assurance, it looks as if the president failed to put America first, and also used taxpayer’s money to put pressure on a foreign government to produce material that would help his re-election campaign. If in 2015 Barack Obama had given the government of Azerbaijan the impression that American aid was contingent on digging up dirt on Mr Trump’s property deals there, would that have been a betrayal of the trust that America put in him? Yes it would.

That is why more Democratic members of the House of Representatives are now talking about impeachment. There are three groups: the convinced impeachers, who have argued for getting rid of Mr Trump almost from day one; the House leadership, which believes that impeaching Mr Trump in the House and then seeing him acquitted in the Senate (where Republicans have a majority) would be a political own-goal; and the reluctant impeachers, who are willing to believe that impeachment is not in their narrow political interests but believe that to duck impeachment because it is politically inconvenient would be to shirk the role the founders gave to Congress. This is the group to watch closely over the next few days.

As for the Senate, the numbers lined up against any possible impeachment trial are still stacked in Mr Trump’s favour. The Hunter Biden story is hugely helpful for Mr Trump and gives Republicans another genuine scandal to talk about when the subject of Ukraine comes up. Because that the vice-president’s son, who does not know a great deal about hydrocarbons, sat on the board of a Ukrainian gas company, drawing a salary of as much as $50,000 a month, while his father was not just the sitting vice-president but was responsible for the White House’s Ukraine policy was, if not illegal, then the kind of misjudgment that only seems normal for those who have grown accustomed to the cash-for-influence industry in Washington, DC. In moral terms, what Hunter Biden did or did not do in Ukraine has nothing to do with whether the president offered the president of Ukraine guns for “oppo research”. In political terms, the two are linked.

That leaves American politics in a bind. The president may have abused his office. Yet if he has, nothing much can be done about it. Even if the numbers change and the House votes to impeach, Mr Trump will probably be exonerated in the Senate. Mr Trump would be unimpeachable. The glimmer of light is that the scrutiny Mr Trump is being subjected to now over his dealings with Ukraine might make him think twice about doing something similar in the future.