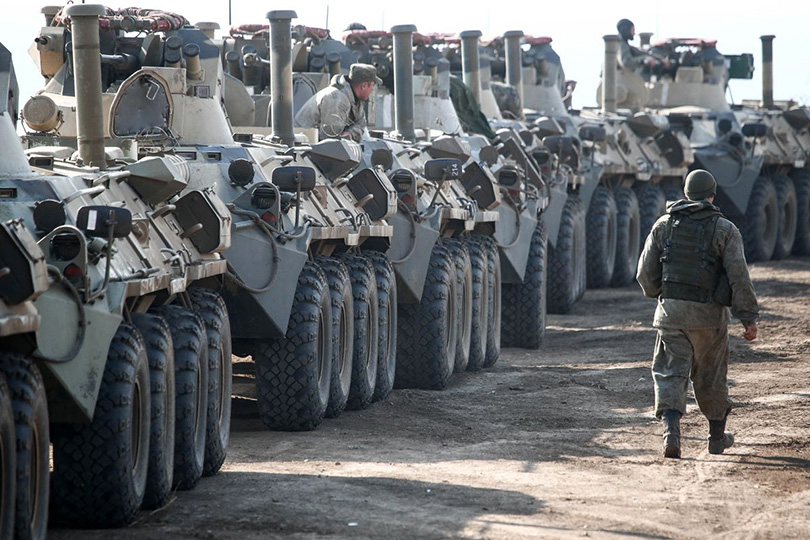 Although NATO/Russian relations have been tensing since the Russian incursion into Ukraine in 2014, the numbers of flashpoints have escalated recently. Belarus, with Russian help, has raised tensions as they have tried to send Middle Eastern refugees across their border into countries of the European Union and NATO, specifically Poland. In response, Poland has asked for a NATO meeting to consider the Russian action and possible NATO response. Poland has also indicated it will double the size of its army – already one of the largest in NATO.

During the G20 meetings, American intelligence warned that “a high probability of destabilization,” of the Ukraine by Russia may take place this winter. A US briefing indicated that Moscow was preparing for a possible invasion of the Ukraine.

These conclusions were not merely based on the number of Russian troops on the border, but additional intelligence on Russian President Putin’s intentions.

American Secretary of State Antony Blinken told reporters, “We do know that we’ve seen in the past Russia mass forces on Ukraine’s borders, claim some provocation by Ukraine and then invade and basically follow on through on something they planned all along.”

Another worry according to the French foreign ministry is that Russia has refused ministerial level talks with the Ukraine and Germany on the peace process in disputed parts of the Ukraine border.

It’s not just the number of forces being deployed by the Russians. They have shifted some of their elite forces to use them in any potential conflict with Ukraine. The 1st Guards Tank Army, which is based around Moscow has apparently been shifted to become an operational reserve for the 41st Combined Arms Army (CAA). The 41st CAA was originally stationed in Siberia, but has been moved to Russia’s Western Military district, which stretches from Finland to the Russian border with Ukraine. They are near Belarus and the Ukraine.

If war starts with NATO, the 41st CAA would likely move through Belarus towards the Sualki Gap, which is found on the Polish/Lithuanian border. This would link up with the Russian enclave of Kaliningrad and break up Polish and Lithuanian defenses. Then, the 1st Guards Tank Army could exploit any weaknesses and strike towards the Oder River on the Polish/German border.

Russian security forces that would be used to suppress any dissent in entered areas are also mustering near Rostov.

Putin likely believes that a weak American president and Europe’s need for Russian natural gas will cause NATO to dither long enough for Russia to make some significant advances.

What NATO has in Eastern Europe

The one way to make Putin to rethink his perceived incursion plans is to move military assets into Eastern Europe, especially Poland and the Baltic nations.

It is also desired by NATO to improve the readiness of the units already deployed.

Poland, Latvia, and Lithuania have instituted states of emergency along their borders with Belarus.

This spring, the US moved nuclear capable fighter bombers into Poland.

However, official American attitudes towards Russia remain split. American General Milley of the Joint Chiefs of Staff said Russia’s movements were “not overtly aggressive. However, at the same time CIA Director Burns had said he had “serious” concerns about the Russian military buildup. Secretary of State Blinken warned Russia about making a “serious mistake” in the Ukraine.

To back up its concerns, NATO rotates four battalion sized combat units in Latvia, Lithonia, Estonia, and Poland. It has also deployed a brigade in Romania. Meanwhile, the US Congress is pushing Biden to send some air defense systems to Ukraine.

There is even talk of sending an Israeli Iron Dome missile defense system to Ukraine.

The problem is that these NATO units are more of a “trip wire” than a threat to blunt any Russian advances. A RAND study found that NATO couldn’t successfully defend its eastern members with the current assets. Wargaming indicates that it would take seven brigades to prevent a rapid overrun of the three Baltic nations.

At best, NATO might have three battalions in the Baltic nations – equivalent to about one brigade. The RAND study indicates that it would require an order of magnitude of more forces to be truly effective. Given America’s ability to rapidly move forces globally, the US Army could rapidly reinforce its units in Eastern Europe – although probably not enough to guarantee victory.

The US and NATO had planned a major deployment exercise a year and a half ago, but it was scaled back due to the Covid pandemic. However, this summer, NATO held a military exercise called Decisive Strike 21. It included 28,000 troops carrying out maneuvers ranging from the Balkans to the Baltic nations. Later this month, there will be an exercise named Steadfast Jackal 21, which will train the NATO Rapid Deployable Corps.

On the naval side, the British aircraft carrier HMS Prince of Wales will become the command platform for the NATO Response Force/Maritime in 2022. It will help free up US aircraft carriers for other operations.

NATO and the US aren’t merely deploying forces in military exercises. The ghosts of the Cold War are making an appearance in Europe again. The Pentagon has reactivated a nuclear unit based in Mainz-Kastel. It will field hypersonic weapons aimed against command-and-control targets in Russia.

The 56th Artillery Command will be armed with “Dark Eagle” long range hypersonic missiles that can reach Moscow in 21 minutes and 30 seconds. The last time the unit had been operational was 1991, as the Soviet Union was collapsing.

The Dark Eagle system, which can be transported on a C-130 aircraft, has a maximum speed of 4,000 miles per hour, a range of 1,725 miles and a weight of 16,300 pounds. In addition to the hypersonic missile, the command will also field the ground launched Tomahawk cruise missile. These cruise missiles are nuclear capable.

Ground equipment for the Dark Eagle has been delivered to the US Army, but the hypersonic missile itself is due for delivery in 2023.

Both the Army and Navy will deploy the Dark Eagle (officially named the Long-Range Hypersonic Weapon). The army version will be air and road mobile. The Navy version will be installed on its Virginia attack submarines and later the Zumwalt class stealth destroyer.

The Zumwalt class destroyer, which is difficult to detect can move undetected into enemy coastal waters and then launch the hypersonic missile – giving the opposition only minutes to react.

However, Russia hasn’t backed down. Russia has dispatched two nuclear capable strategic bombers to patrol Belarusian airspace to counter NATO patrols that have reputedly been doubled.

The possibility of a mistake has grown.