Face Masks Are In 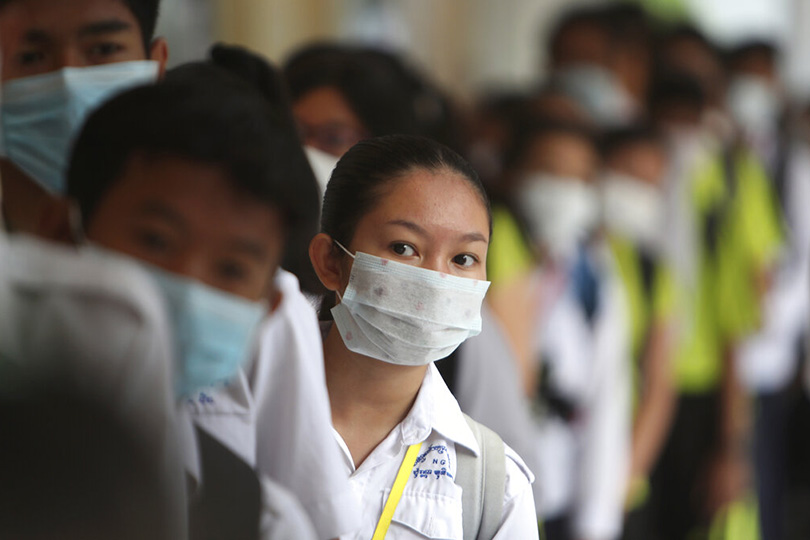 The West has long stigmatized mask-wearing, unlike in many Asian countries, where those who do not wear masks during public-health crises are the ones who are stigmatized.

“We want our country back. We’re not going to be wearing masks forever,” Donald Trump said this week when asked whether his administration would consider calling on Americans to wear masks en masse as the coronavirus pandemic ravages the nation, signaling that he wasn’t exactly comfortable with the idea.

His comments came amid reports that the Centers for Disease Control and Prevention is rethinking guidance it’s been issuing for months: that people who aren’t sick or caring for someone who is need not wear face masks when they venture out in public.

The president seemed to be implying that a masked country couldn’t be our country—that such a sight would be alien and alarming, and thus hopefully a short-lived ordeal. It was an expression of the stigma long attached to mask-wearing in the Western world, unlike in many Asian countries, where those who don’t wear masks during public-health crises are the ones who are stigmatized. While an American might walk into a grocery store these days and view the proliferating number of masked shoppers as crushing confirmation that the apocalypse is nigh, someone in Hong Kong or South Korea might see the same scene as an uplifting indication that the community is coalescing to fend off catastrophe.

It would be simplistic to state that the stigmatization of mask-wearing in the West, and the corresponding lag in Westerners adopting the practice, are responsible for the struggles to contain the coronavirus. The science on the efficacy of face masks just isn’t there. But these factors do illustrate a number of the challenges—the failure to take the threat of pandemics seriously and prepare accordingly, the lack of social solidarity during public-health emergencies, the absence of comprehensive government containment strategies—that proved disastrous as the virus moved westward.

“In the West, I think we need to overcome—I wouldn’t call it a fear of the mask, but [the] stigma with a mask,” Christos Lynteris, a medical anthropologist at the University of St Andrews, in Scotland, told me. “I’ve heard people say, ‘I was carrying a mask in the airplane but I was too ashamed to wear it.’ Where does this shame come from? Is it because people will think you are a wimp? Because people will think you are ill?”

That shame simply doesn’t exist in East Asia. China has had an ethic of wearing masks during public-health emergencies since the outbreak of the pneumonic plague in 1910, and Japan has a long tradition of doing so as well. In other East Asian countries, the public practice was first forged in 2003 as SARS, another lethal coronavirus, spread from China, pummeled the health systems of neighboring countries, and left a terrifying, indelible impression of the damage that viral respiratory diseases can inflict.

Judy Yuen-man Siu, a medical anthropologist at Hong Kong Polytechnic University, told me by email that mask-wearing went from being uncommon in Hong Kong before SARS to being widely adopted afterward—as an important component of containing a viral outbreak, and as a civic duty and a signal of “support to health-care providers.” Today in Hong Kong, “if you do not use a face mask in public areas, you will be stigmatized and discriminated against, not just because people would [be] afraid of you as a potential virus-spreader, but [also because] it can mean you have low civic responsibility,” she wrote. Siu noted that face-mask usage has been thoroughly “socialized” in the semiautonomous Chinese region, by public-health officials who stressed the need for it in the throes of the SARS crisis as well as by schoolteachers. Governments “can create culture,” she observed, just as the Trump administration has during the coronavirus crisis by advising Americans not to wear masks unless they are sick.

Lynteris said that ever since SARS, Westerners have associated mask-wearing with China and East Asia more broadly. He attributed the resulting stigma in the West in part to xenophobia and the idea of “China being the origin of infectious diseases and Chinese people spreading them.”

If you wear a mask in a British supermarket, he noted, “people react strangely,” for a number of possible reasons: the association with East Asian countries, a suspicion that you’re using something that others are more in need of, a concern that you’re wearing it because you’re ill and shouldn’t be there, a conviction that you’re “unnecessarily spreading panic.”

Still, face masks likely “played an active role in slowing down the disease transmission progress in Asian countries” relative to Western countries, Elaine Shuo Feng, a University of Oxford epidemiologist who has studied countries’ varying face-mask policies during the COVID-19 outbreak, told me. But their usage should be part of a package of containment measures, including social distancing, school closures, and possibly lockdowns to slow the spread of the coronavirus through communities.

In places such as Hong Kong, South Korea, and Taiwan, which have had relative success so far in containing COVID-19, the public and its leaders understood this reality from the start of the outbreak. As my colleague Ed Yong has cautioned, the fact that several countries that have made the most progress in containing the coronavirus also have robust mask traditions doesn’t necessarily imply causation. “China advocated mask use early on and still struggled to contain the disease,” he points out, while “Singapore reserved them for health-care workers but still flattened the curve of infections.” What can be said more definitively is that mask-wearing tends to be widespread in countries that view disease outbreaks with the gravity that comes from firsthand experience with the horror of an epidemic.

There’s plenty of debate among experts about the risks and rewards of people wearing homemade or surgical masks in public. And in a country such as the United States, which is currently grappling with an acute shortage of masks (a reflection of the government’s failure to prepare for a pandemic by stockpiling personal protective equipment), priority for the most effective ones must go to health-care and other essential workers who are most at risk of exposure, along with those segments of the population that are most vulnerable to the virus. In such an environment, an Oprah-esque “everyone gets a mask!” policy works only as a hypothetical exercise.

Nevertheless, the general consensus among experts is that while wearing some type of mask might not do much to protect you from catching the coronavirus, it might help prevent you from infecting others if you have COVID-19. Relative to measures such as social distancing, diagnostic testing, and better equipping hospitals, public mask-wearing (even if it’s a DIY kind) is an inexpensive intervention in the midst of a pandemic—maybe not as effective as good hand-washing hygiene, but probably better than the alternative of no one covering up. And it may be especially effective when combined with other hygienic practices such as hand-washing. Plus, it has sociocultural advantages that go beyond the narrow scientific question of masks’ capacity to disrupt the transmission of the virus.

“Whether the masks actually work or not, having a community wear them brings it together symbolically, visually against this disease,” which is particularly vital during periods of social distancing and isolation, Lynteris said. For the general public, masks are less a reliable prophylactic against a virus than a sign that a society has learned painful lessons about taking epidemics seriously—more seriously than many in the United States and Europe have, until very recently at least.

Already, the threat of COVID-19 has eclipsed the stigma of mask-wearing in several nations, such as Austria, the Czech Republic, and Israel, where governments have instructed everyone to cover their face outside the home. The United States could be next; sporting a black cloth mask yesterday as he urged all of his constituents to follow his lead, Los Angeles Mayor Eric Garcetti said, “I know this looks surreal [but] we’re going to have to get used to seeing each other like this.” Even Trump, within the space of a day this week, went from reluctantly contemplating mask-wearing to telling Americans that “there’s certainly no harm” in covering their face with a scarf. Taiwan is now donating millions of face masks to the U.S. and around the world.

It’s possible that Americans and Europeans will emerge from the current crisis, as East Asians emerged from the traumas of SARS and subsequent epidemics, with the conviction that an object they once associated with overreaction and otherness can actually be a means of cultivating prudence and togetherness.