With Scenes of Police Brutality, America’s Beacon to the World Winks Out 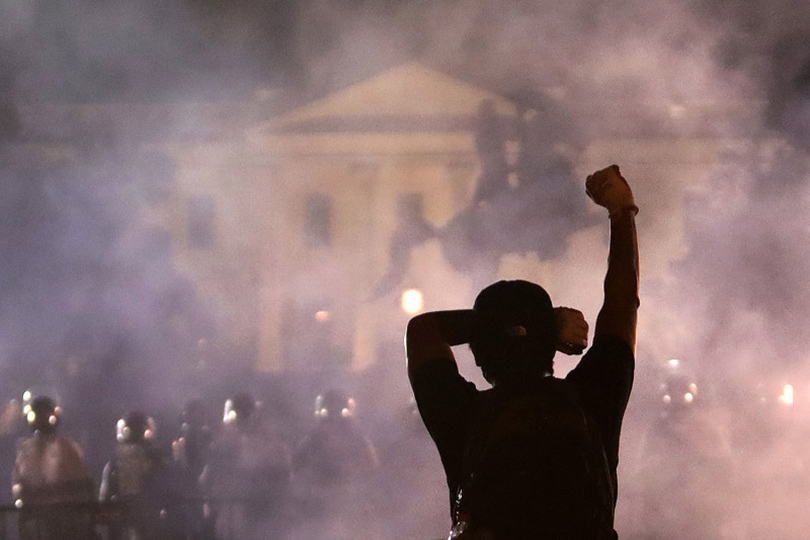 U.S. soft power was already dwindling under Trump. But the new wave of police violence and racial injustice may be drying up the reserves.

A world that once looked to the United States to champion democracy and human rights watched with dismay and alarm as police departments across the nation unleashed violent crackdowns on anti-police protesters, targeting looters, demonstrators, and journalists alike, even as President Donald Trump on Monday criticized state governors for their “weak” response.

Meanwhile, from Canada to New Zealand, tens of thousands of people gathered around the world to protest the killing of an African American man, George Floyd, who was suffocated on May 25 in Minneapolis by a white police officer who kneeled on his neck. The officer has since been charged with murder. Floyd’s death a week ago touched off U.S. demonstrations that swiftly turned into riots in more than 100 American cities. But memorials also sprouted up in cities around the globe, from a candlelight vigil in Mashhad, Iran, to a mural painted on the Berlin Wall bearing Floyd’s likeness along with his dying plea: “I can’t breathe.”

What shocked observers around the world more than anything was the often brutal response of police, some of whom were videotaped ramming demonstrators with SUVs and tasing college students in their car. One heavily armed Minneapolis police officer fired paint rounds Saturday night at a resident watching the events unfold from her porch while another officer called out, “Light ’em up.”

The overwhelmingly negative international reaction to the crackdown showed how far the United States’ reputation has fallen in the eyes of the world under the Trump presidency, evoking the international opprobrium directed at previous U.S. governments during the Vietnam War and civil rights era, when police in Southern states turned attack dogs on black freedom marchers.

“The erosion of U.S. global leadership has been faster than expected,” a senior European diplomat told Foreign Policy. “Military supremacy and financial leverage is still there. However, reserves of political and ‘soft’ power are being depleted rapidly.”

“This is placing traditional allies in a difficult position—trying to cling to a traditional value-based connection [with the United States] which is diminishing fast,” the diplomat said. “Europe is hoping for a turning point, although everyone is realizing that there is no absolute return to 2016.”

The protests have also laid bare to the world deeply rooted societal problems in the United States, undercutting America’s standing as a standard-bearer of modern liberal values, including the promotion of human rights, democracy, and free-market capitalism.

“I’m very concerned about how this will impact our leadership and our voice overseas,” said Linda Thomas-Greenfield, a former career diplomat who was the seniormost-ranking African American woman in the U.S. foreign service when she retired in 2017. “People look to the United States for leadership, they look to us for support. They are worried that we’re losing ground.”

In his call with the governors, Trump urged them to increase law enforcement efforts and noted that foreign countries were watching—and judging. “You know, when other countries watch this, they’re watching this, the next day wow, they’re really a pushover. And we can’t be a pushover. And we have all the resources—it’s not like we don’t have the resources. So, I don’t know what you’re doing,” he told the governors.

Trump’s national security advisor, Robert O’Brien, said that U.S. rivals were trying to exploit the situation and rebuked their criticisms as hypocritical. “I want to tell our foreign adversaries, whether it’s Zimbabwe or China, that the difference between us and you is that that officer who killed George Floyd … he’ll be investigated and he’ll be prosecuted, and he’s going to receive a fair trial,” O’Brien told ABC’s on Sunday. “The American people that want to go out and protest peacefully, they’re going to be allowed to seek redress from their government. They’re not going to be thrown in jail for peaceful protesting.” (Peaceful protesters and journalists were among some 4,000 arrested across the United States over the weekend.