Turning Crisis into Success in Germany 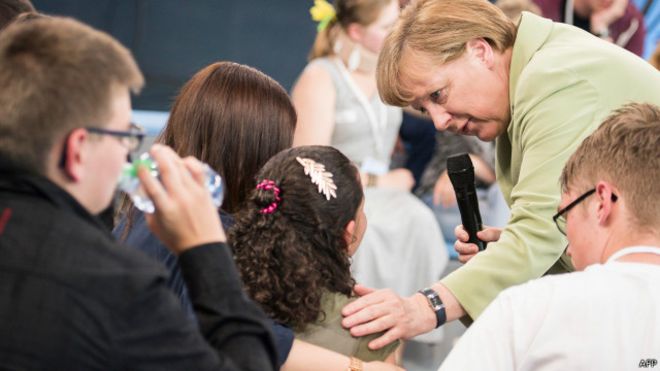 The enduring strength of Germany’s political center probably reflects the country’s remarkable economic success, which it has sustained for more than a decade, even as most of the rest of Europe has faced serious challenges

According to an early May opinion poll by ARD DeutschlandTREND, the far-right Alternative for Germany (AfD) party’s popular support now stands at 15%, up from around 5% a year ago. Can this dangerous trend be reversed?

The AfD’s rise since last summer has been the direct result of the surge in the number of refugees – close to one million in 2015 – entering Germany. After all, the party has made opposition to admitting refugees the centerpiece of its platform, which also includes antagonism toward the European Union and a very conservative social program, to which an openly sectarian religious component was added at a May 3 party convention in Stuttgart.

Yet Germany’s broad political center continues to hold. The center-right Christian Democrats and their allies still have the support of about 33% of the electorate; the center-left Social Democrats have 20% support; and the Green Party is backed by some 13%. Even the Free Democrats have clawed their way back from hard times, and now have about 6% support.

In short, moderate political forces still enjoy the support of more than 70% of Germans – in contrast with, say, Austria, where the far right was able to gain 36% in the first round of presidential elections. Even Germany’s Left Party, which has 8% support and is not traditionally defined as moderate, has a more moderate “eastern” wing and a more radical “western” wing.

The enduring strength of Germany’s political center probably reflects the country’s remarkable economic success, which it has sustained for more than a decade, even as most of the rest of Europe has faced serious challenges. It owes this outcome partly to the euro, which has benefited German exports and growth far more than most of its citizens realize. If Germany still had – or had reverted to – the Deutschmark, employment and growth would have been hampered by a much stronger currency, on a trade-weighted basis, in the wake of the global economic crisis.

More fundamentally, Germany has benefited from the extraordinary culture of consensus that it developed in the post-World War II period, with social partners and political parties showing a remarkable ability to compromise. A fairly wide territorial distribution of economic activity, together with strong local governments and civil-society organizations, has contributed further to a general sense of contentment – a sense that is absent in much of the world nowadays.

Now, however, as the refugee crisis fuels populism and political polarization, the foundations of Germany’s success appear to be under threat. Indeed, Germany’s future could play out in two ways. The world has a large stake in which scenario prevails.

The first scenario is bleak: Germany fails to integrate the refugees socially and economically, political discontent surges, and the newcomers become increasingly frustrated with their plight. Any steps they take to vent that frustration embolden right-wing populists and could lead to violence from both sides.

If, in the worst case, a terrorist attack were to occur – especially one that could, in some way, be linked to refugees – the nationalist-populist reaction would be powerful, potentially weakening the very fabric of German society. Anti-Muslim elements of that reaction would become fodder for religious extremists in the Middle East, by seeming to confirm their narrative of inevitable religious and civilizational conflict.

The second scenario turns the refugee challenge into another success. Integration of the refugees proceeds reasonably quickly, and Germany resumes its path of moderate politics, social solidarity, and economic growth. In the long term, the refugees could actually make a strong contribution to German prosperity.

Despite the AfD’s rise, there is plenty of reason to remain optimistic. Late last year, thousands of Germans gathered at train stations and on the streets to welcome the first groups of refugees as they arrived. Throughout much of the country, local communities have mobilized to provide housing, language training, and social guidance for refugees, who have never experienced anything like a wealthy democratic society. Tens of thousands of teenage students are acting as “facilitating partners” to their refugee classmates who don’t speak German, many of whom arrived in the country without their parents.

Whether this approach will endure, and bring about successful integration, will depend on both the Germans and the refugees. The refugees will have to accept the rule of German law, even if in some cases it does not make sense to them. Both the new arrivals and German residents will need to balance respect for diversity in lifestyles with the understanding that, in a secular democracy, the same laws apply to everyone.

Those laws must protect private religious and cultural space for all, without allowing that space to be used as an excuse for infringing on the basic human and democratic rights of every individual. The large existing community of former immigrants could be helpful in articulating and implementing that delicate balance, imperfect as it may have been at times.

The successful integration of the refugees will also depend on economic growth. Indeed, this amounts to one more argument for Germany to use its fiscal space to increase investment and implement growth-enhancing policies.

While the demographic inflow could become a large net benefit for Germany in the long run, it remains a burden in the short term. That is why there is also a need for some burden-sharing by European countries, as well as efforts to achieve a marked slowdown in the refugee flow, while upholding the human rights of those fleeing conflict and death.

If Germany can integrate the refugees, it will send a powerful message to nihilists and extremists everywhere. It would show that, with a strong economy, active civil society, and the rule of secular law, religious differences, cultural tensions, and labor-market challenges can be overcome. This is a message that the world needs now more than ever.

* Kemal Derviş, former Minister of Economic Affairs of Turkey and former Administrator for the United Nations Development Program (UNDP), is a vice president of the Brookings Institution.