Did Trump get played by the king of Jordan like someone new to the region? 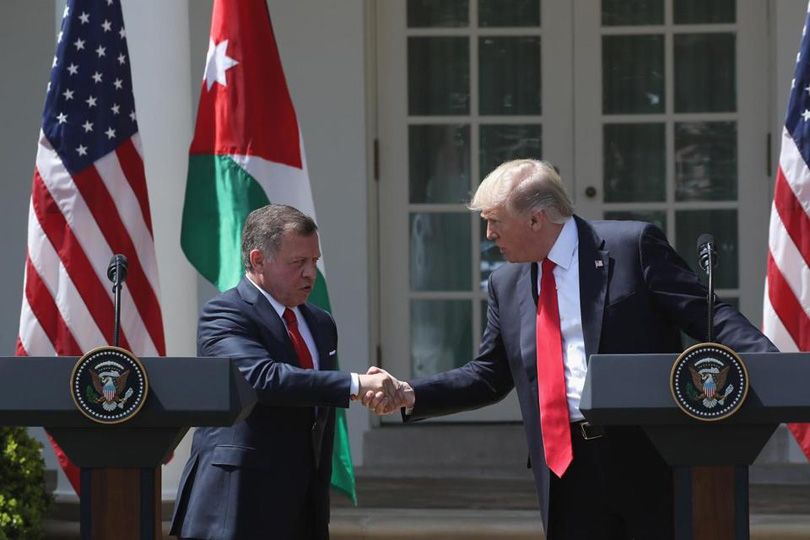 When it comes to the Middle East, President Donald Trump has one of the world’s most qualified advisors. The problem? Trump’s getting subjective analysis — this advisor happens to be an involved party. Few have noticed Jordanian King Abdullah II’s hand in Trump’s most significant Middle East decisions to date, but the king’s influence is discernible in at least two major moments: the recent airstrikes on Syrian military targets and the Trump administration’s reversals on settlement policy in Israel. And while Middle East experts might feel relieved to finally see long-term area expertise — and comparatively liberal-minded principles — influencing regional policy decisions, King Abdullah’s apparent clout should raise concerns about the president’s foreign policy inconstancy.

For the past six years, Jordan has borne some of the heaviest burdens of the Syrian war. King Abdullah has adopted a position on refugees diametrically opposite to that of President Trump, welcoming more than 1.2 million Syrians into his country. One in three people living in Jordan are refugees of various nationalities, and Syrian refugees constitute more than 13 percent of the entire population (in the United States, they comprise about 0.005 percent of the population). Jordan’s economy has suffered accordingly, with the small country increasingly reliant on public debt and international aid to cover growing deficits. Rising fuel prices and high unemployment have soured day-to-day life in Jordan: Low voter turnout in the last election suggests a broader disillusionment with democratic processes and skepticism toward King Abdullah’s push to develop political parties. This fall, the so-called Islamic State claimed responsibility for an attack in the southern city of Karak in which 10 people died. The attack was presumably retaliation for King Abdullah’s support of coalition airstrikes against the Islamic State in Syria.

And still, the international community remains content to let Jordan tread in increasingly hot water. While President Obama and King Abdullah agreed on many points, most notably on the removal of Syrian President Bashar al-Assad, the Jordanian sovereign was unable to sway the Obama administration’s deep-seated skepticism toward military involvement in the Middle East. When President Trump came into office, apparently uninterested in the nuances of Middle East policy, Jordan’s untenable status-quo was nowhere on the agenda.

Nevertheless, in February of this year, King Abdullah had a substantive conversation with Vice President Mike Pence shortly before meeting President Trump at the National Prayer Breakfast in Washington. Two days later, White House Press Secretary Sean Spicer issued a statement that suggested the construction of new settlements on the West Bank was an obstacle to peace. The statement, a sharp departure from Trump’s blanket pro-Netanyahu stance, surprised the president’s allies and critics alike. Middle East experts, however, saw King Abdullah’s hand in the statement. His Majesty, unlike the Palestinian Authority, had the ear of the Trump administration and was using his influence to shape Trump’s as-yet nebulous Middle East policy.

Two months later, King Abdullah and Queen Rania embarked on an official visit to Washington just in advance of Chinese President Xi Jinping’s heavily-publicized trip to the capital. During their visit, on Tuesday, April 4th, Syrian President Bashar al-Assad (whom the Trump administration had implicitly endorsed) ordered a strategic air strike on the city of Khan Sheikhoun, in rebel-held Idlib province. The government forces used chemical weapons, in now-characteristic breach of international law. More than 80 people, including dozens of children, died in grisly fashion from the bombing and the effects of sarin nerve gas. President Trump, standing next to King Abdullah in the White House Rose Garden, publicly reversed his position on Assad and condemned the attack — a courageous stance, marred only by Trump’s insistence on blaming his predecessor for the current state of affairs in Syria.

Two days later, again to the surprise of both Trump’s allies and critics, the administration authorized a tactical strike against al-Shayrat airfield. The scores of Tomahawk missiles launched from warships in the Eastern Mediterranean targeted Syrian aircraft and military personnel (although the United States took care to prevent inadvertent Russian casualties). While the range of international reactions to the strike fall along predictable lines, commenters are struggling to make sense of the strike within Trump’s avowed non-interventionist world view.

There are, perhaps, some short-term domestic benefits to the strike on al-Shayrat. The strike does clearly distinguish Trump from Obama in the Middle East. Yet neither of these resemble sufficient motivations for such a bold move. Consider instead that the decision to strike Syria reflects the tremendous influence one person — in this case, King Abdullah — can exert on the president.

In August 2013, Syrian government forces unleashed sarin on the residents of Ghouta, an opposition-dominant suburb of Damascus, killing hundreds. President Barack Obama, under public pressure to enforce the infamous “red line,” sought Congressional approval for military retaliation. The effort ran aground on several shoals: in addition to Obama’s personal reluctance to use force in the Middle East, obstinate legislative opposition denied Obama the constitutional cover he believed the use of force required.

While the U.S. government bickered over constitutional intricacies, Jordan faced a tectonic shift. Alongside Assad’s growing brutality 2013, a savage terrorist group calling itself the Islamic State was growing in influence. The general sense that the international community would rather stand by than get involved drove Syrian refugees in ever-greater numbers across the Jordanian border. In 2012, roughly 30,000 refugees lived in Zaatari, a camp with a 75,000-person capacity. In 2013, Zaatari housed almost 110,000. These numbers don’t account for the even greater number of non-registered refugees, living in urban centers beyond the reach of most governmental and international aid.

Given Jordan’s acute financial and geopolitical dilemma, King Abdullah couldn’t afford — neither literally nor figuratively — the aftermath of another Ghouta. The Tomahawk strike, which does not fit into a larger strategic vision for the region, does little to bring Syria closer to peace. It does little to mitigate the intractable problems Jordan faces. And it does very little to improve the United States’ dubious position in the greater Middle East. It may not even prevent new waves of refugees from further overloading Jordan’s impossibly strained resources. It is a knot tied at the end of a rope — at the very least, 2017 will not resemble 2013 for Jordan.

That President Trump listens to King Abdullah is at once reassuring and troubling. His Majesty is using U.S. power to save his kingdom, a strategic interest if not a moral imperative for the United States and its allies. Yet, the strikes do little to proactively improve Jordan’s prospects for survival and growth, and it is an open secret that His Majesty is more welcoming toward U.S. influence than many of his subjects.

Perhaps most concerning: The dynamic between King Abdullah and President Trump suggests a degree of susceptibility in the latter that less principled leaders will notice. While the mogul-in-chief might be less malleable when facing a President Vladimir Putin or Xi, he would do well to keep his cards closer to his chest. Otherwise, he might get royally played.

Emily Whalen is a doctoral student at the University of Texas, Austin, specializing in the history of U.S. foreign policy and military interventions. She is a former coder for the Armed Conflict Location and Event Database Pakistan team, and has lived and worked extensively in the Middle East. All views expressed here are her own.