The End of Global Britain 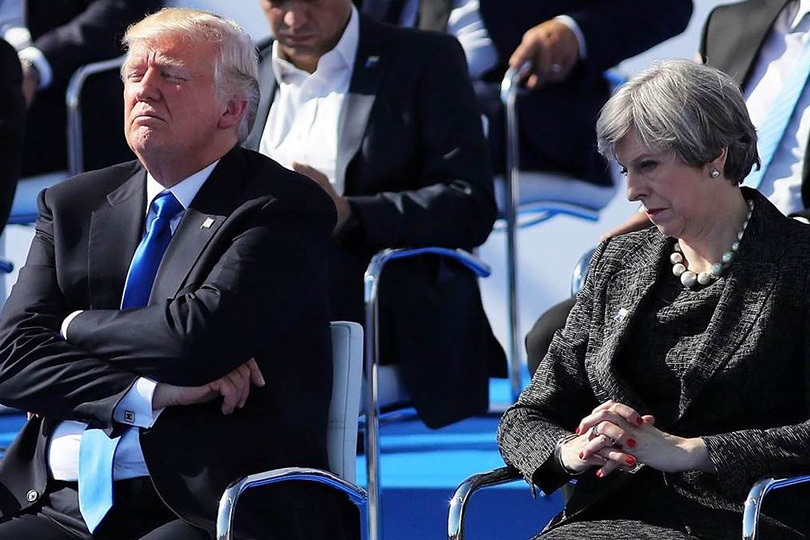 In the two years since the Brexit referendum, the United Kingdoms global influence has been significantly diminished.

In the two years since the Brexit referendum, the United Kingdom's global influence has been significantly diminished. A country that once punched above its weight in international affairs now only punches down, and Brexiteers’ aspiration to lead the vast “Anglosphere” into a brave new world has become a comical delusion.

Nowadays, Britain’s words and actions on the world stage are so at odds with its values that one must wonder what has happened to the country. Since the June 2016 Brexit referendum, British foreign policy seems to have all but collapsed – and even to have disowned its past and its governing ideas.

Worse, this has coincided with the emergence of US President Donald Trump’s erratic administration, which is pursuing goals that are completely detached from those of Britain – and of Europe generally. Trump’s abandonment of the Iran nuclear deal, combined with Russian President Vladimir Putin’s increasing belligerence and Chinese President Xi Jinping’s growing ambitions, indicates that the world is entering an ever-more confrontational and dangerous phase.

Trump’s evident lack of personal chemistry with British Prime Minister Theresa May – and the Anglophobia of his new national security adviser, John Bolton – ensured that this was never going to be the best of times for the United Kingdom. But it also doesn’t help that generations of British foreign-policy hands have regarded themselves as ancient Greeks to America’s Rome. To a Brit like myself, this analogy always seemed too confident. Having lived in America, I suspected that US leaders did not heed the advice of British diplomats nearly as much as those diplomats liked to think.1

Still, if ever there was a moment for Britain to sprinkle some of its characteristic calm and resolve over world affairs, that moment is now. And yet, the UK appears to have checked out. Since World War II, Britain’s close relationships with continental Europe and the US have served as the two anchors of its foreign policy. But now, both lines have essentially been severed.

At the same time, the British government’s all-consuming preoccupation with untying the Gordian knot of Brexit has blinded it to what is happening in the rest of the world. And its blinkered view seems certain to persist. Negotiating the terms of Britain’s withdrawal from the European Union is likely to take years, and the outcome will inevitably have implications for the country’s unity, given the intractable issue of the Northern Irish border. Even if that issue can be sorted out, a campaign in Scotland to link it to the EU rather than to London will continue to command the attention of the government and civil service for the foreseeable future.

At any rate, the promise of a “global Britain” freed from the chains of the EU was never more than idle talk and sloganeering. At the recent Commonwealth Heads of Government Meeting in London, business and political leaders from Commonwealth countries around the world heard plenty of Brexiteer bluster, but little concrete talk of future trade deals.

A country like India could potentially be a major UK trade partner after Brexit. The problem is that Indians see Britain and Europe as one market. To them, Britain’s quest to adopt its own rules and standards amounts to a frivolous inconvenience. Before expanding trade and investment with Britain, India will most likely pursue a deeper relationship with the EU. Indeed, India never saw Britain as a particular champion of its interests inside the EU.

Likewise, most of those outside of the “Leave” camp regard the Brexiteers’ aspiration for Britain to lead the vast “Anglosphere” into a brave new world as a comical delusion. To be sure, the show of US and European support after the nerve-agent attack on a former Russian spy and his daughter in Salisbury, England, might suggest that Britain is still punching above its weight. The coordinated expulsion of Russian spies from the EU and the United States was a victory for British diplomacy; and suspicions that the Russians were exploiting Britain’s increasing isolation seem to have mobilized NATO. But the larger truth is that the Russians are right: Britain is now Western Europe’s weak link.

Thus, it is only a matter of time before Russian President Vladimir Putin probes British weakness again. And, as if the old sin of turning a blind eye to Russian oligarchs laundering money through the UK were not problematic enough, the suicidal act of quitting the EU leaves Britain with fewer tools to combat Russian meddling in its affairs. Britain is losing its influence over EU cybersecurity and energy policies just as cyber warfare and energy geopolitics are becoming key fronts for hostile state and non-state actors.

Worse, at the same time that Britain is giving up its seat at the EU table, it also seems to be giving up its liberal-democratic values. During the Brexit referendum campaign, the Leave camp openly stoked hostility toward outsiders. And the recent “Windrush” scandal over the government’s poor treatment of Caribbean-born legal residents has reprised the illiberal legacy of May’s previous tenure at the Home Office.

But equally insidious has been the government’s embrace of “Britain First” mercantilism, under which arms sales to Saudi Arabia are not a matter for caution, but rather an opportunity for profit. When the UK joins the Trump administration in putting trade and investment before human rights and good governance, it is journalists, opposition politicians, and human-rights activists around the world who bear the costs. By retreating from liberal norms, the May government has become, like the Trump administration, an enabler of authoritarian behaviors around the world.

The collapse of British foreign policy has come at a time of deepening uncertainty. The global re-balancing between the US and China is a generational challenge that will outlast Trump and even Xi, who is now unbound by term limits. In an increasingly off-kilter world, the duty will fall to Europe to serve as ballast. But a Europe without Britain’s traditional leadership, judgment, and diplomacy will be a lesser Europe. And Britain, by its own hand, risks being reduced to a footnote.

* Mark Malloch-Brown, a former UN Deputy Secretary-General and British cabinet minister, is Chair of the Business and Sustainable Development Commission