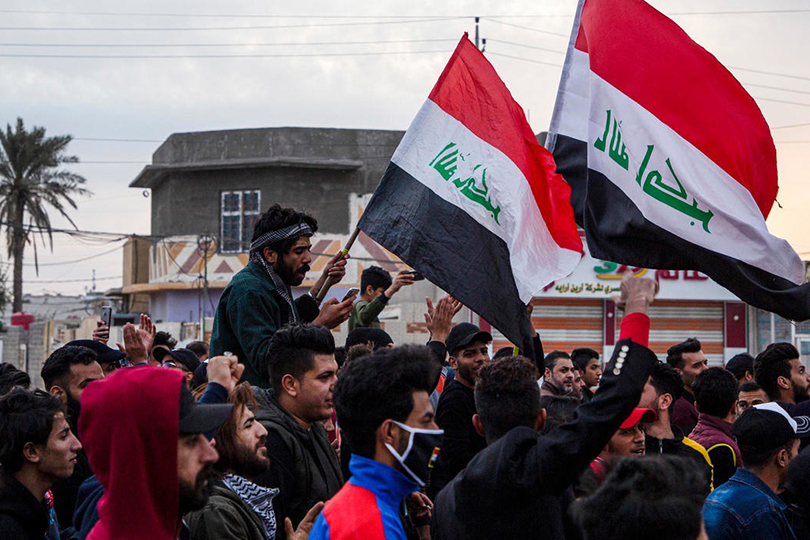 The past several days have witnessed a great deal of political movement in Iraq as a result of the country’s remarkable current situation. As usual, the actions of Iraq’s traditional political players have remained unclear—and, like the end of a thriller, many possibilities for Iraq’s political future remain open, though change itself is inevitable.

While it’s not possible to predict the future of Iraq’s political process, one can nevertheless make deductions about its general shape from the present. In particular, the recent contested appointment of Adnan al-Zurfi to the position of prime minister in the wake of Abdul-Mahdi’s resignation and Mohammed Allawi’s failed nomination to the position has revealed some specific realities of the current state of the Iraqi political scene. Iraq is in the throes of a generational shift in power, though which of Iraq’s next generation will become the country’s new political elite remains undecided. The failure and decline of Iraq’s current elite—shaped by a political past that is no longer relevant in post-2003 Iraq—is one outcome increasingly solidifying on Iraq’s political stage.

First and foremost, it has become clear that what was known politically as the “Shia house” has fragmented, not only because of a conflict of interest but also because of an absence of charismatic political leadership. Many leaders of this group have demonstrated that they still possess the mentality of an armed opposition, and that what they learned from Iraq’s post-Saddam era was how to fight—not how to conduct politics. Ironically, despite continuing to sing the praises of Iranian policy and given the savvy and the pragmatism of Iran itself, this leadership has failed to emulate Iranian politicians’ flexibility and cunning, insisting instead on maintaining the mentality of winner-take-all in victory and playing the role of spoiler when losing.

With the exception of the Kurds, the traditional ruling class in Iraq, even after seventeen years in power, has not been able to function without outside instructions when making internal decisions. This lack of autonomy stems mainly from the erosion of their popular legitimacy. Even the forces that had enjoyed widespread popular support in Shia circles, such as the Dawa Party, the Islamic Supreme Council of Iraq, and the Sadrists have all recently seen major declines in their popularity. It has become clear that the foreign factor was what connected various constituents of the Sunni and Shia houses, not any internal store of legitimacy. When the effects of this factor declined, for various foreign and domestic reasons, the bloc crumbled and became useless.

A denial or inability to read the facts of Iraq’s current situation, as well as the decline in the momentum of the uprising, has given these politicians the delusion that they are still able to direct Iraq’s policies in accordance with their narrow interests. They operate under the mistaken assumption that Iraqis will forget the reason they went out to the streets in October 2019–(corruption and power sharing/Muhasasa). Rather than take advantage of the conditions that diminished the uprising’s momentum in order to regain some of what they lost in political functionality, these politicians have gone back to the same old farces that characterized previous years, forgetting that the director and audience these farces were designed to reach are are no longer there.

Instead, Iraq is witnessing the rise of a young generation who are more liberal, who grew up in the conditions of today’s Iraq, and are not accustomed to foreign patronage—unlike the older generation, who was raised abroad and cling to the mentality of reliance on foreign patronage and proxies. These politicians, driven by the experience of opposing the Saddam Hussein regime, have developed a siege mentality on the political, religious, social, and intellectual levels in order to preserve their own security.

on the other hand, the failure of old guards has encouraged a new generation from inside post 2003 political parties. This generation is distinguished by an experience of openness to the full spectrum of society and to the world as a result of travel and global communication unfathomable to previous generations. These younger Iraqis’ attitudes are also characterized by the bulk of their political experience stemming from the post-Saddam era of Iraq. Therefore, the younger Iraqis who have stemmed from the anti-Saddam forces began to openly criticize the failures of the older generation and tried to correct them—but are making these efforts from within the system. Separately, the younger generation outside of the country’s elite has begun to organize itself as a coherent force, taking advantage of the experience of the last five months of protests and the coordination needed to sustain the uprising’s momentum.

As such, a new rivalry is taking shape between this new generation: the second generation of Saddam opponents, who want to reform the system from within (as is the case with the oppositionist coalition of the National Wisdom Movement), and the generation of the uprising, who want to destroy the foundations upon which the current system is based.

Concurrently, politics since 2014 have also been shaped by the rise of the powerful armed Shia movement. Radical Shia forces, backed by Iran, took advantage of the conditions during the ISIS occupation of large parts of Iraq to impose their influence over the Iraqi political stage. They also benefited from the collapse of the state and its armed forces, as well as the fatwa for “sufficiency jihad” that helped legitimate their efforts

Military prowess became political power when these armed forces succeeded in bolstering their legislative and executive power in the elections of 2018, which saw extensive fraud and a reluctance to vote among the Iraqi electorate. Compounding their political success was the poor performance of the American envoy to Iraq, Brett McGurk, combined with the excellent performance of Qassem Soleimani. These factors allowed armed Shia forces to influence the appointment of three successive prime ministers—with Iranian blessing.

Shia forces began to play the role of kingmaker—even Kurdish and Sunni politicians understood that straying too far from Iran’s line would cost them their seats in parliament. But the poor performance of Adil Abdul-Mahdi’s government and its failure to deal with the youth uprising placed these armed forces—and behind them, Iran—in direct confrontation with the forces of the popular uprising, which had begun to see this government as a tool of Iranian influence and weakening Iraqi sovereignty. According to the latest surveys from IIACSS, the number of Shia Iraqis who see Iran as a trusted partner has declined to its lowest level since 2003—reaching just about 15 percent. The popularity of the armed factions and their commanders have also dropped to its lowest level since 2014.

What is strange is that while these forces’ backer, Iran, evidentially understands the depth of the changes occurring in Iraq—especially after Soleimani’s removal from the scene—the forces themselves are still out of touch with reality. In a recent visit intended to unify Shia ranks, Iranian ambassador in Baghdad Iraj Masjedi met with Mustafa al-Kazimi, Iraq’s director of intelligence who has long been accused by some armed Shia factions of being a foreign agent, to send a clear message to these factions on the need to change their policies and adapt to Iraq’s new situation. Yet these forces have so far not given any indications of flexibility. Since the appointment of Adnan al-Zurfi as prime minister—now disputed by Iraq’s Supreme Judicial Council—the militias have been trying without Iran’s consent to play the role of spoiler in the derailed partnership talks—the role played by the Amal Movement in Lebanon for many years before it failed in its role of kingmaker.

It is unfair to say that the Shia have failed to govern Iraq, as we often hear. Rather, it should be said that those who have failed are the politicians of post-2003 Iraq. As a result of the circumstances of their upbringing and governance, they became unable to keep hold of Iraq’s helm. As such, it is time for their retirement. A new generation of Iraqis, consisting of Shia, Sunnis and Kurds, has just reached maturity and will take over the reins of the country in a matter of years, whether they are welcomed by the old guard to do so or not. Whether this generation belongs to the second rank of the current ruling forces or to the generation of the uprising, it is increasingly evident that the political history of Iraq will be divided into the pre-uprising and post-uprising eras.