Trump's Strategy on Use of Federal Law Enforcement 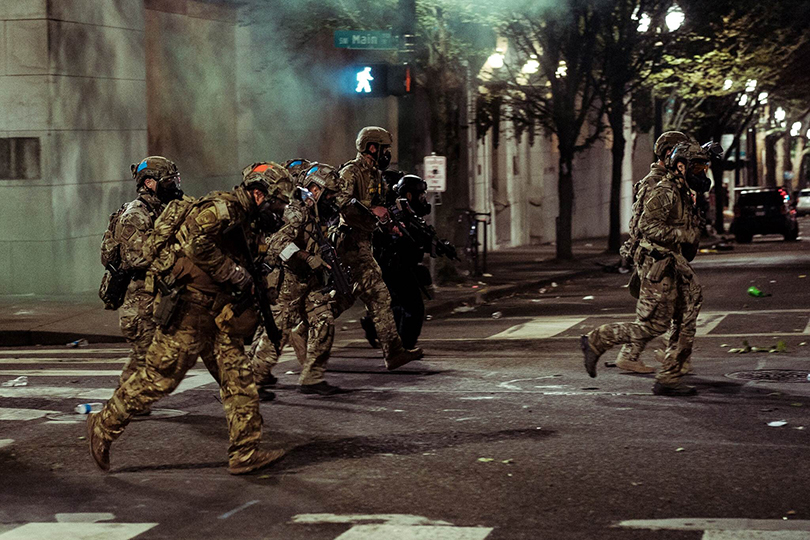 The US is currently debating President Trump’s decision to use federal law enforcement police, claiming that it is necessary to protect Federal property in cities where the current political leadership is unwilling to provide that protection. It has led to charges by his opponents that he is trying to federalize law enforcement and will use these forces to stay in the White House if he loses in November.

As is the case in many of these situations, there is no clear answer. There are a lot of political considerations in the charges. Some of it has been settled in landmark legal cases over the last two hundred plus years. And some have been settled on the battlefield during the American Civil War.

When the American colonies won their independence from England, England recognized each of the 13 colonies as an independent, sovereign nation. The signing of the US Constitution, which formalized the current United States, recognized the individual sovereignty of each state in addition to the sovereignty of the federal government.

Sovereignty was clearly split. The 10th Amendment of the US Constitution clearly gave all powers not enumerated by the constitution to the states and the people. However, the Supremacy Clause in Article 6, Clause 2 says federal laws take priority over state laws, providing they do not contravene the Constitution.

Several states signed the Constitution, while making it clear that they reserved the right to leave the United States, if they found this document to be too burdensome. This was the legal rationale for the succession of the states before the Civil War. In fact, this same issue was the legal justification for the opening shots of the Civil War on Fort Sumter in Charleston Bay – that the federal government had illegally reinforced the fort without state approval.

The Union victory over the Confederacy settled the issue and courts recognized the reality of that victory in several cases.

However, the concept of where federal law and state law conflicted remains an issue. After the federal siege of Ruby Ridge in Idaho in 1992, the issue came up, when an Idaho prosecutor indicted an FBI agent for manslaughter for killing the wife of Randy Weaver. The federal court assumed jurisdiction in the case and dismissed the case because the FBI agent was a federal agent. However, later the Federal Court of Appeals held that he could be charged under state laws.

The Supreme Court also ruled in the 1990s that state and local law enforcement were not required to spend money or effort to enforce federal law. This gave local police the rationale to ignore the defense of federal property.

The result is that the issue of federal enforcement of laws and cooperation is a quilt work of precedents. Federal and local law enforcement usually cooperate unless local politicians disagree with a federal law. An example is “illegal” immigration, where some cities and states expressly forbid the local police from cooperating with the federal government.

This is the background behind the current controversy.

The issue came up first in Portland, Oregon, which is very Democratic and progressive. They have had Black Lives Matter (BLM) protests and clashes almost every night for two months. These protests included coordinated attempts to control federal buildings, which overwhelmed the local federal protective agents. Trump said the situation in Portland was “Worse than Afghanistan.”

In one instance, the federal courthouse was set afire by protesters on Wednesday night, they were angry by the detaining of some protesters by the federal agents sent by Trump, and after the Department of Homeland Security sent teams in to reinforce the local agents.

The DHS teams came in without warning the governor, mayor, or local law enforcement. They also came in heavily armed like soldiers, not policemen.

The state went to federal court to seek a restraining order to stop the federal teams from detaining Oregonians.

Stories quickly spread that these agents were taking protesters off the street without arrest warrants or identifying themselves (unconstitutional behavior). They were also charged with using less than lethal weapons that can seriously hurt protesters.

This week, Trump announced that he was going to send other teams of federal agents to other cities with “lawlessness problems”.

Meanwhile, Democrats in Congress called for investigations into the Portland events and the legality of Trump’s moves.

One of the cities to receive federal agents will be Chicago, which saw the shooting of 15 people at a funeral just this week. Despite that, the mayor, a Democrat, was not interested in additional help from the Federal government.

Meanwhile the District Attorney of Philadelphia threatened to arrest federal agents if they came to town.

“Anyone, including federal law enforcement, who unlawfully assaults, and kidnaps people will face criminal charges from my office.”

However, he did admit that federal agents have great flexibility to travel to cities if they obey the law.

Trump supporters responded “but he didn’t mention that his city has major crime problems. 230 people have been murdered in Philadelphia this year – up 28% from last year. The city has also had nearly 1,000 shootings this year too”. According to them “these are the types of statistics that can encourage independents to vote for Trump and his pro-police position”.

Democrats obviously do not agree. Elizabeth Goiten of the Brennan Center for Justice said this was a pretext to have federal agents supplant local police.

“In short, the use of secret federal paramilitary forces in Portland (and soon Chicago and likely other cities) is every bit the abuse of power that it appears to be. And it is an abuse we can expect to see again in November if the administration isn’t called to account,” she tweeted.

Is this being a rehearsal for November?

First, we have no idea of what violence may take place in November after the elections. Both sides seem agitated and the potential for protest and violence by both sides is real, especially if it is a close election with the winning margin being decided in the courts or by absentee ballots.

But there is a question if these paramilitary police teams will side with Trump if he is trying to remain in power.

Probably not. These statements are aimed to encourage the Democratic voter base.

America has gone into overdrive during the past few months when it comes to charges of racism. While most people supported BLM after the events in Minneapolis, there are concerns after the violence of the last two months. Trump is counting on many voters, especially White and middle-class voters, to show less support for the BLM movement.

Trump’s calculation is based on his desire to repeat the 1968 situation, when riots and protests led to the victory of the “law and order” presidential candidate Richard Nixon. He is wishing that supporting peaceful protest and opposing violence is a good way to win elections, while supporting the radical protesters is a nearly guaranteed way to lose.

Supporting law and order is clearly Trump’s strategy. On Wednesday, he approved Operation Legend to tamp down lawlessness in some of America’s biggest cities. The operation is named after Legend Ruggiero, a four-year-old who was shot and killed while he slept. Trump was joined by the Ruggiero family in the White House.

The issue according to Trump is not just protests, but an increase in murders and shootings. As the election date approaches, it is not certain whether this strategy will work while his failure to confront Coronavirus is dominating the news forcing him to cancel holding the GOP convention in Florida.