For Iraqi Christians, a Bittersweet Homecoming 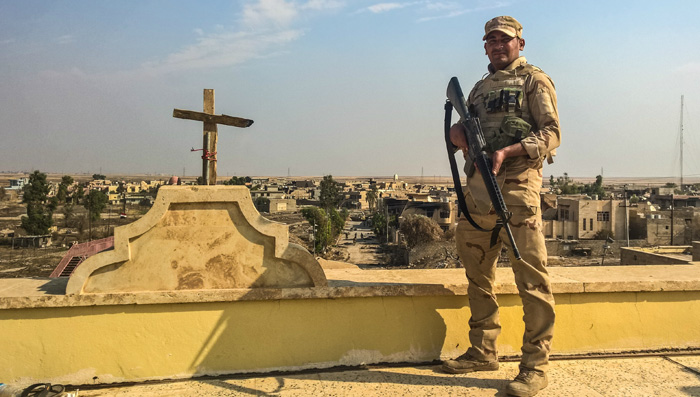 They’re taking their homes and churches back from the Islamic State. But it may be too late to start over

Christians are finally returning to the Church of the Immaculate Conception. In the courtyard, they find piles of shell casings and mannequin torsos riddled with bullet holes. The Islamic State fighters who held the building until just a few days ago used the space for target practice.

The cavernous interior of the church, the largest in Iraq, is charred and black. The floors are strewn with trash. Islamic State fighters destroyed the crosses and burned any religious books they could find. Now a man is searching through the rubble, salvaging scraps of manuscripts in Aramaic, the ancient language spoken by Jesus.

A small group of priests and local people gathers around the altar, and for the first time in two years, the sound of prayer fills the hall. Gunfire and shelling can still be heard not far away. A man goes up to the darkened altar and kisses it, shaking his head in disbelief at the level of destruction. One of the priests finds a few pieces of communion wafer and wraps them respectfully in paper. “This is Christ’s body, after all,” he says.

Before the Islamic State launched its war in northern Iraq in the summer of 2014, the town of Hamdaniya (also known as Qaraqosh or Bakhdida), 20 miles southeast of Mosul, was home to 50,000 people, most of whom belonged to several ancient Christian sects. These are some of the oldest Christian communities in the world, and the Islamic State was determined to wipe them out. When the jihadis invaded, most residents fled to safety in the nearby Kurdish region or left the country entirely.

Now the military campaign to retake Mosul, Iraq’s second-largest city, has liberated nearby Hamdaniya, potentially enabling its people to revive their unique and imperiled culture. But that task seems horribly daunting for the first brave ones who made the journey to their ruined hometown.

A sense of jubilation momentarily unites the liberators — the Christian militias and the Shiite-dominated Iraqi Army soldiers who fought together against the Islamic State (which espouses a twisted version of Sunni Islam). Shiite mullahs and Christian priests tour Hamdaniya together. The cross on the majestic dome of another church, St. Barbara’s, was destroyed by the jihadis. It has now been replaced by a wooden cross — courtesy of the Iraqi Army.

“I haven’t seen my home in two and a half years,” says Jameel, a young member of the Nineveh Plain Protection Units, a 500-strong Assyrian Christian militia. “Now I’m back, and it’s beautiful, even though everything is bombed out.” A self-described poet, he joined the militia last year. On his iPhone, he proudly shows off a photo of a dead Islamic State fighter he says he killed.

But there are mixed feelings about how to move forward. Despite the euphoria, there’s a sense that the fabric of Iraqi society is as fragile as ever. A desire for revenge against Sunnis simmers beneath the surface.

“I’m ashamed to say it, but some Islamic State fighters are still hiding in the Sunni areas,” says an Iraqi military intelligence officer who identifies himself only as Mohammed. He has little hope for the future: “I’m afraid that things are only going to get worse.” Mohammed, who calls Hamdaniya home, worked as an interpreter for the U.S.-led coalition during the Iraq War. He worries that Iraq has too many factions — Kurds, Shiites, Sunnis, Christians — that are all competing for land and power.

“The Sunni-Shia-Kurdish conflict prevented us from building up our country,” says Khalis Ayshon, a Chaldean Christian and former Iraqi legislator. “This conflict destroyed our country, and this has happened because when the Americans came, they did not control this issue.”

Even so, Ayshon can’t hide his joy at returning. “This is a historic day for me,” he says. Unconcerned about exposing himself to Islamic State snipers who may still be around, he walks down a road leading to his home. It is littered with fragments of shrapnel, shell casings, and chunks of concrete. An Iraqi Army officer runs after him and convinces him to stop.

Iraqi Army Humvees and armored personnel carriers, some adorned with images of revered Shiite Muslim leaders, roam the ruined streets. Many of the houses once owned by Christians are burned-out hulks, their walls spray-painted with Islamic State graffiti. In some places, a jihadi slogan — “Islamic State is here and will expand” — has been painted over with praise for Christian militias. One sign proclaims hopefully, “We are all Iraq.” But many of the returnees are focusing first on the idea of reviving their own endangered community, not on building a common nation.

During his stint in parliament, Ayshon worked on legislation to prevent Christians from selling their land to any other community. He says it’s important for them to hold on to their place in Iraq. “Our roots go back 5,000 years,” he says, referring to Assyrian Iraqis. “We built this civilization, which they, the Arabs from the desert, have destroyed.” He makes little effort to hide his contempt for the majority of Iraqi society — yet another reminder of the mutual distrust that permeates the country.

But he insists that he doesn’t want to pick a fight. “I’m telling my people that this is like Easter,” he says. “They have to cleanse their hearts of everything before they clean their houses, and towns, so that we can begin anew.”

The Iraqi Christians’ persecution at the hands of the Islamic State is only the latest in a long series of atrocities they’ve endured since the U.S.-led invasion in 2003 unleashed the country’s sectarian demons. Before the Islamic State’s onslaught two years ago, about 500,000 Iraqi Christians remained of the 1.4 million who lived in the country before the invasion. Now Ayshon estimates that another third of this remainder has left.

Iraqi Christians want two things: assurance of their future security and acknowledgment of their past suffering. To these ends, Ayshon this year founded Shlomo, a nongovernmental organization that documents violence and intimidation against Christians in Iraq. The group’s volunteers claim to have collected 30,000 testimonies from Christians who fled the Islamic State. Ayshon says almost all of the 130,000-150,000 Christians who lived in the Nineveh plains, the area east of Mosul, have been displaced.

His group has tracked cases of killings, torture, forced conversions, and the kidnapping and selling of Christian girls and women. “We want to prove that what has happened to Christians is a genocide,” Ayshon says. “I want the U.S. State Department and Congress to say that what happened here was genocide and maybe take the case to the International Criminal Court in The Hague.”

Ayshon dreams of an autonomous Christian province within Iraq, which he says could be secured by a referendum. Its safety, he says, should be assured by its own protection forces. “We want to live as we want, not as they [Muslims] want us to live,” he adds. In thinking this way, he is not alone.

“The Islamic State took away our land, our money, our history, our dignity. Only they cannot take God from our heart,” Nicodemos Daoud Matti Sharaf, the Syriac Orthodox archbishop of Mosul, told me in Erbil. “We hope for an internationally protected Christian autonomous region,” he added. “We don’t trust the government in Baghdad.”

Back in Hamdaniya, Ayshon gets tired of waiting for the army to provide protection for his homecoming. He persuades a fighter from the Nineveh Plain Protection Units to escort us so we can go and see what has become of his former home.

The militiaman enters the burnt-out house first to check for booby traps or Islamic State fighters who have stayed behind. After he gives the all-clear, we follow him in to find shattered glass and charred walls. The furniture is gone or destroyed.

Ayshon looks around stoically. Amid the rubble, he finds his college diploma in electrical engineering, the only thing that remains intact. “At least the fountain in the garden is still standing,” he says wryly. “That’s a start.”

By the time we’re ready to leave, an Iraqi Army Humvee is waiting. An officer scolds Ayshon for driving around in a civilian vehicle that could easily be mistaken for an Islamic State suicide car bomb.

On our way back to Erbil, where Ayshon has been living for the past two years, he sighs, thinking of the destruction. But he’s determined to remain optimistic. “When the people return, life will return,” he says. “But we need money and jobs fast to restore Iraqi Christians’ faith in their own land.”