Calling a Halt to Turkeys Offensive in North-eastern Syria 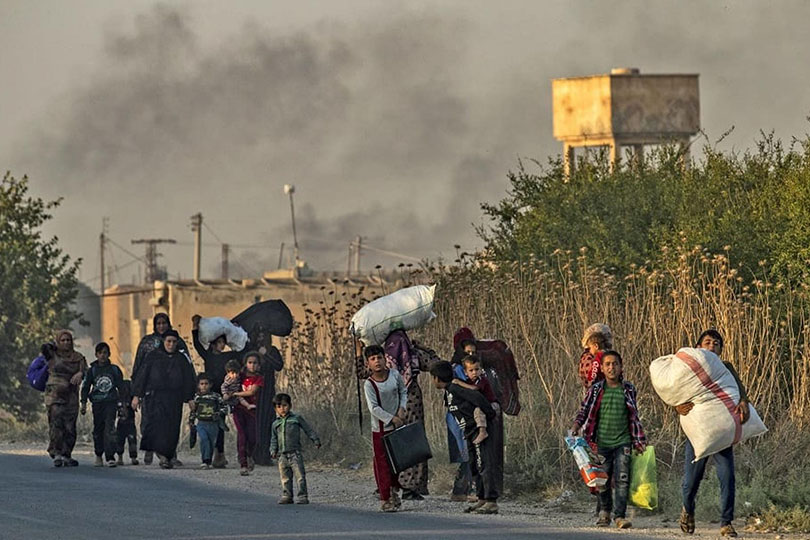 A surprise announcement from President Donald Trump has once again plunged U.S. Syria policy into chaos and confusion, paving the way for the Turkish offensive in north-eastern Syria that Ankara had long threatened and put in motion on 9 October. Even a limited Turkish intervention risks triggering a costly cycle of escalation between the Turkish army and the People’s Protection Forces (YPG), Washington’s Kurdish partner in the fight against the Islamic State (ISIS). Should hostilities intensify, a broader Turkish advance into densely populated areas could entail significant civilian casualties, displace many of the region’s inhabitants, fuel local insurgency against Turkish forces, and draw the Syrian regime and allied forces, even including Russia, into the fray. In any scenario, opportunities for ISIS to revive and spread its influence will multiply in proportion to the increase in violence and disorder.

The crisis began on 6 October, when President Trump decided, after a phone call with Turkish President Recep Tayyip Erdoğan, that the U.S. would not stand in the way of a Turkish offensive that Erdoğan had announced days earlier (he had made similar announcements numerous times in the past but always received U.S. signals to stand down). Turkish troops had already started moving into position near the Syrian border, primed to cross upon getting the green light from Ankara – and Washington. In a subsequent statement, the White House announced the withdrawal of U.S. troops from “immediate” areas, apparently meaning the parts of Syria that the administration expected Turkey to invade. The statement added that Turkey would assume responsibility for ISIS fighters captured in Syria’s north east over the past two years.

The White House’s dramatic shift shocked the YPG-led Syrian Democratic Forces (SDF) but also roused an intense bipartisan outcry in Congress and elsewhere in the U.S. political establishment. Amid the growing backlash, Trump threatened in subsequent tweets to “destroy and obliterate” Turkey’s economy if Ankara were to do anything he considered “off-limits” in Syria. He called the Turkish offensive “a bad idea” but also stated that he would hold Turkey to its commitment to protect civilians and religious minorities, implicitly acceding to the Turkish action. Meanwhile, senior Trump administration officials clarified that the U.S. did not condone a Turkish offensive, had removed only some 50 troops from two positions near the border towns of Tel Abyad and Ras al-Ayn (where the Turkish incursion was anticipated to begin), and was undertaking no broader troop withdrawal at this stage. The scope of Turkey’s incursion into the north east therefore remains unclear for now, as does the extent of the U.S. withdrawal. Turkey, however, has told Western officials that it plans to capture the full 30km-deep “safe zone”, along the length of its Syrian border, that it has demanded in talks over the past year. On 9 October, Turkey began bombarding positions along the border with artillery and from the air, and the ministry of defence announced that a ground incursion had begun.

A substantial Turkish incursion could meet with spirited SDF resistance and prompt new waves of refugees to flee to neighbouring Iraq and even into Turkey. Erdoğan’s declared intention to resettle as many as three million Syrian refugees now living in Turkey in the “safe zone” he is seeking, which would effect a fundamental demographic change in the area, can only stiffen local rejection of, and struggle against, the presence of Turkish troops and allied Syrian opposition fighters.

A range of Trump administration officials and U.S. military officers fear the consequences of unconditional U.S. withdrawal from northern Syria amid a unilateral Turkish military incursion, no matter its scope. While the specifics of their concerns vary, a common denominator is clear: were the U.S. to abruptly remove a significant part of the deterrent umbrella, military capacity and stabilisation programming that it provides, with fellow members of the International Coalition to Counter ISIS likely to follow suit, north-eastern Syria could sink into a violent multi-party scuffle over territory and resources, widening the openings for an ISIS resurgence.

Already, the security situation is unravelling in areas captured from ISIS in early 2019, to the east and south of Deir al-Zour in the Euphrates River valley, and swathes of eastern Syria are becoming hubs of renewed jihadist insurgency. The SDF’s willingness and ability to keep up counter-insurgency operations in these areas almost certainly are contingent on continued U.S. support, given threats from Turkey and the Syrian regime.

It is also unclear how Turkey would take responsibility for tens of thousands of imprisoned ISIS fighters and families, who are held not by the U.S., as Trump suggested, but by the SDF. The largest camp, which holds some 70,000 family members of fighters, is located in al-Hol, some 80km from the border. Whether an SDF fighting for its survival would be willing or able to perform this task going forward must be in doubt. But it is hard to see how Turkey could take on the role, given how far south of the Syrian border the camp is.

Turkey’s determination to shift the status quo in north-eastern Syria is rooted in strategic and national security concerns that, rightly or wrongly, it feels Washington has done little to address. Turkey has complained for years that the U.S. chose the YPG and then the YPG-led SDF as its main partner in the fight against ISIS in Syria. Turkey considers the YPG a terrorist group, inseparable from the Kurdistan Workers Party (PKK), which since 1984 has waged insurgency in south east Turkey. Over 40,000 people have been killed in the conflict between the PKK and the Turkish state, and Turkey, the U.S. and the EU have designated the PKK a terrorist organisation. The YPG, which has organic links with the PKK in outlook and membership, denies that it maintains operational links to the PKK and states that it has stayed neutral in the fight between the PKK and the Turkish state. For their part, U.S. officials involved in the initial decision to back the YPG say it came only after repeated, and unsuccessful, attempts to partner with Turkey and its preferred Syrian factions against ISIS.

To appease Ankara, the U.S. and Turkey agreed in August 2019 to establish a joint security mechanism in north-eastern Syria. In the following weeks, the YPG pulled its forces out of defined border areas and dismantled its fortifications in the border towns of Tel Abyad and Ras al-Ayn. U.S. forces escorted the Turkish military on joint patrols and both militaries conducted overflights in Syria to monitor the agreement’s implementation. Turkish officials claim, however, that these steps fell short of Turkey’s objective to see the area cleared of the YPG and become a “safe zone” that would allow the repatriation of Syrian refugees now living in Turkey. Again, they warned of unilateral Turkish action.

A Turkish invasion of northern Syria can only lead to a new war and a new humanitarian crisis. In the best-case scenario, the U.S. would now deploy efforts to de-escalate tensions between Turkey and the YPG. Reaching a sustainable military arrangement acceptable to both Turkey and the YPG was difficult even before the latest Turkish attack, as their respective central demands appeared irreconcilable. Ankara was looking to end YPG hegemony over north-eastern Syria, and demanding that Turkish forces or their proxies wield ultimate authority, much as Turkey has done in Aleppo province’s “Euphrates Shield” area and Afrin district in the recent past. For its part, the YPG, which has indicated that it would be prepared to pull out of certain border areas, hinged this concession on the deployment of an international force that could deter a larger Turkish advance, thereby preserving its own control of the north east.

As Turkey proceeds with its assault, a compromise along the lines previously pursued by the U.S. seems increasingly out of reach; whether some additional steps to reassure Ankara would persuade it to limit the scope of its operation is unclear.

The bottom line is that the U.S. should urgently press Turkey to stop its incursion from advancing deeper into the north east. Should that fail, there would only be one avenue the YPG could pursue: a deal with the regime in Damascus, despite the fact that earlier attempts have failed. Such a deal would be hard to reach given the gap between the two sides’ core interests, not to mention that the regime’s record of breaking agreements reached with other opposition groups hardly inspires confidence. But the YPG has few viable alternatives, and might see an interest in this path if Russia proves willing to mediate among them, Ankara and Damascus, with an outcome that could allow for a YPG withdrawal and the return of regime forces to the country’s Turkish border, perhaps alongside Russian military police.

In the past, the U.S. sought to discourage the YPG from going down this road. As long as Washington maintains a residual force in Syria, it likely will continue to strongly oppose any YPG move to reach an agreement with the regime, and in particular to hand back the oil fields currently under its control to Damascus and its Iranian backers. U.S. officials have alluded publicly and privately to the importance of maintaining pressure on the regime by depriving it of the country’s main natural resources: its oil and its wheat, the majority of which are located in the north east. But while in the past the YPG, banking on U.S. protection and support, took that advice to heart, there is little to stop it from relaunching these efforts (albeit from a weaker position) now that Washington’s unreliability has been made clear. Already, the YPG, the regime, Russia and Iran all have made noises to that effect.

Regardless of any longer-term arrangement, the immediate priority for the U.S. should be to declare and reiterate its opposition to a further and deeper Turkish invasion. Military escalation along the lengthy Turkish-Syrian border has already created new waves of displaced persons fleeing the fighting and diverted YPG forces from the Euphrates River valley, where they have been combating ISIS remnants, and from SDF-held detention camps where they hold ISIS fighters and families. If this pattern continues, ISIS seems likely to coalesce and escalate its attacks, not just in unstable regions such as Deir al-Zour, but also in heretofore mostly stable areas such as Raqqa city, where ISIS carried out an attack just before the Turkish offensive got under way.

Turkey should see the costs of a wider assault. When it launched its offensive on 9 October, its shelling struck not only targets in the area of its initial ground incursion (between Tel Abyad and Ras al-Ayn) but also in major population centres along the border east of the Euphrates, such as Qamishli. This is alarming; if Turkey attempts to seize such a broad swathe of territory, it could cause a high civilian casualty toll and mass displacement. It would likely also incur even stronger international condemnation than it has received already. Ankara should therefore limit its military objectives, lest its operation backfire, worsening its already tense relations with Washington, pushing the YPG back to guerrilla tactics and fuelling the PKK insurgency in Turkey.

Failure to move decisively now to avert a broader offensive could quickly undo the victory over ISIS and reduce a region that appeared to have turned the corner on conflict into violently contested terrain once again.