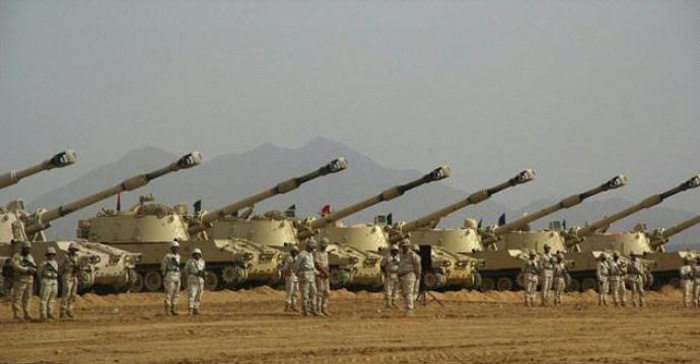 Weapons imports by Saudi Arabia and Qatar have rocketed by over 275 percent over the past four years, a new report found on Monday.

Between 2011 and 2015, Gulf states were the most significant market for sales by the United States, the world’s biggest arms exporter, the Stockholm International Peace Research Institute (SIPRI) found.

In a new report assessing worldwide trends in arms sales over the last four years, SIPRI found that increased demand from the Middle East had led a 14 per cent global rise in arms transfers.

The increase was not marked universally – arms imports to European states fell by 41 per cent between 2011 and 2015.

By contrast, arms imports by Middle Eastern states grew by 61 per cent – the largest regional increase – during a period marked by massive internal unrest as well as the rise of Islamic State.

At the forefront of this growth were Saudi Arabia – now the world’s largest importer of weapons – and Qatar.

Arms purchases by Qatar between 2011 and 2015 jumped by 279 per cent, while Saudi Arabia’s increased by 275 per cent over the same period compared to the previous four years.

Despite increased competition from China – whose arms exports increased by 88 per cent - the US has remained the world’s largest arms dealer.

9.7 percent of US arms deals were made with Saudi Arabia, while 9.1 per cent were with the UAE.

Saudi Arabia is currently leading a coalition of regional states including the UAE in a bombing campaign targeting Houthi rebels in Yemen.

The report notes that the campaign has been “facilitated by high levels of arms imports to several of the states leading the intervention”.

“Although concerns have been raised in arms-supplying states over Saudi air attacks in Yemen, Saudi Arabia is expected to continue to receive large numbers of major arms from those states in the next five years,” the report finds, noting that Saudi Arabia has yet to receive 150 new combat aircraft it has recently ordered from the US and 14 from the UK.

The campaign, which receives logistical support from the US and the UK, has been strongly criticised for causing a high level of civilian casualties.

Last month the UN found that nearly 2,800 civilians had been killed since March either by Saudi-led air strikes or the Houthi rebels, who often shell civilian areas and impose sieges on entire towns.

Military advisers from the UK and US are present in the Saudi-led campaign’s control room, it was revealed last month.

Amnesty International last week also alleged that a net profits jump of nearly $1.4 billion for UK arms giant BAE Systems was fuelled by its sales to Saudi Arabia, whose campaign is being investigated by the UN over potential violations of international law.

The world’s largest defence company, Americas Lockheed Martin, has signed several multi-billion deals with Saudi Arabia over the past year.