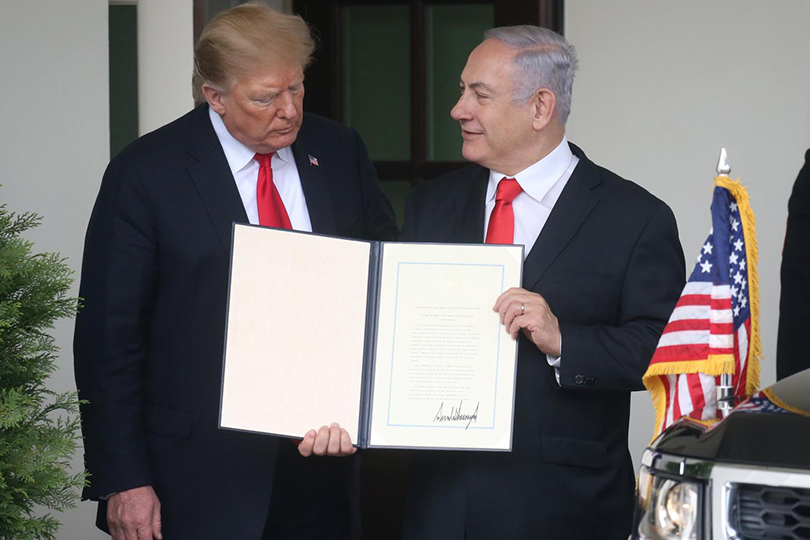 The US president has justified his decision, which was signed into effect on Monday during a news conference at the White House, as being of "critical strategic and security importance" to Israel.

He said with the ongoing civil war in Syria, Iran is making the Golan Heights a "potential launching ground" for attacks against Israel.

Damascus was quick to condemn the US's decision on Monday, with a Syrian foreign ministry official calling it a "blatant assault on Syria's unity and sovereignty" that demonstrates Washington's animosity towards Arabs.

"Trump neither has the right nor the legal authority to legitimise the occupation and theft of others' land by force," the official told Syria's state-run SANA news outlet.

The "entire universe" cannot change the fact that the Golan Heights is Arab land, the official added.

Trump first drew the ire of human rights and legal experts when he tweeted last Thursday that the United States should recognise Israel's "sovereignty" over the Syrian territory.

Israel occupied the Golan Heights after the 1967 war and later annexed the area in a move that remains unrecognised by the international community.

"After 52 years it is time for the United States to fully recognize Israel's Sovereignty over the Golan Heights, which is of critical strategic and security importance to the State of Israel and Regional Stability!" the US president tweeted last week.

Trump's intervention is the latest contentious policy shift in the region, following his recognition of Jerusalem as Israel's capital and subsequent decision to move the American embassy to the divided city.

His administration has pursued a staunchly pro-Israel line since coming to power in 2017, cutting US funding for Palestinian refugees while providing cover for contentious Israeli laws and settlement expansion in the occupied Palestinian territories.

Observers told MEE last week that Trump's Golan announcement aimed to shore up support for Israeli Prime Minister Benjamin Netanyahu, who is in the middle of an election campaign and is seeking to ward off ex-Israeli army chief Benny Gantz, his main challenger in the 9 April polls.

In fact, Trump's executive order was signed alongside Netanyahu, who appeared in a news conference with the US president before he signed the proclamation.

The Israeli premier welcomed the president's decision on Monday, calling Trump the most pro-Israel president ever.

"Over the years, Israel has been blessed to have many friends who sat in the Oval Office, but Israel has never had a better friend than you," Netanyahu told Trump.

Speaking to MEE on Friday, Nihad Awad, the executive director of the Council on American Islamic Relations (CAIR) said Trump's Golan tweet a clear attempt to intervene in Israeli politics and provide a boost to Netanyahu.

"Trump is intervening in a foreign election on behalf of a politician who has aligned with racists, and who has passed segregationist nation-state laws in Israel," Awad said of the Israeli prime minister.

On Monday, Palestinian human rights group Al-Haq also called on the international community to protect residents of the Israeli-occupied Syrian and Palestinian territories following Trump's tweet about the Golan Heights.

Al-Haq said the US president's comments signalled an "escalating alignment of US policy with Israeli objectives to further its territorial control through its settlement enterprise and annexation".

"As Israel and the US continue to take actions that stand in stark violation of international law, Al-Haq calls on the international community to take immediate action to end Israel's unlawful occupations of the Syrian Golan Heights and Palestinian Territory," the group said in a statement.