WHY ARE EGYPTIANS TAKING TO THE STREETS AGAINST PRESIDENT SISI? 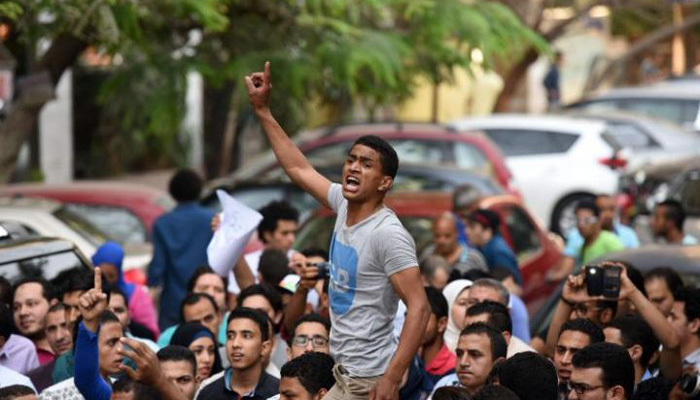 Protests broke out in the Egyptian cities of Cairo and Giza on Monday against the country’s President Abdel Fatteh al-Sis. However, his forces also took to the streets in order to quell unrest perceived as being aimed at creating instability in the country.

The Egyptian authorities prevented protesters meeting at several points in the capital, according to witnesses, who said that officers stopped large gatherings with barricades and armored vehicles. Pro-Sisi supporters lashed out at several journalists in the city.

Agents of the state security apparatus had already rounded up many lawyers, journalists and activists before the protests in a sign of the growing anxiety within Sisi’s regime just years after two coups saw Mohamed Morsi rise to the Egyptian leadership only to be followed by Sisi’s overthrow of the Muslim Brotherhood leader.

But why are Egyptians now taking to the streets against the Egyptian strongman they apparently voted into power with 96.9 percent of the June 2014 presidential vote?

The key issue that saw protesters gathering on Cairo’s streets again on Monday is the transfer of two Red Sea islands, Sanafir and Tiran, to Saudi Arabia, the country that sits on the other side of Egypt across the expanse of water. Sisi’s administration said that these islands originally belonged to Saudi Arabia but Egyptians inside and outside the country are dissatisfied with this loss of land.

While the Egyptian president’s handling of the economy and the conduct of his security services have been problematic issues for many Egyptians, the islands represented a key source of national pride.

The Egyptians in a square in Dokki, a district in Giza city, broke into the chant “bread, freedom, the islands are Egyptian” before policemen used tear gas and birdshot to disperse them.

Egypt had controlled the islands for more than half-a-century after an agreement with Saudi Arabia since the 1950s. But now the government says that the islands are Riyadh’s, a key regional ally who has provided Sisi with billions in aid since he rose to power.

According to TIME , some 2,000 protesters took to the streets of Cairo and Alexandria after the decision on April 15.

Egyptian youths and satirists mocked Sisi on social media, viewing his decision as accepting Saudi money to sacrifice Egyptian sovereignty as Saudi King Salman paid a rare visit to the Kingdom’s Sunni ally. Comedian Bassem Youssef tweeted his thoughts on April 9, suggesting that Sisi had auctioned off Egypt’s possessions. “Roll up, roll up, the island is for a billion, the pyramid for two, and a couple of statues thrown in for free.”

Still, Riyadh pledged to invest in Egypt and provide further aid to Sisi in return for the return of the islands.

The anger over the island issue is not limited to those within Egypt, either. Driving around New York earlier this month, an Egyptian taxi driver, when asked by this author about Sisi’s tenure, animatedly lamented the sale of the islands to Saudi Arabia with confusion, saying that he preferred former leader Hosni Mubarak as any Saudi money that Sisi received in exchange for the islands would not last in the long term, as these two pieces of land surely would.

A Revolution in All Its Implications