Will the US Military Intervene in the 2020 Election? 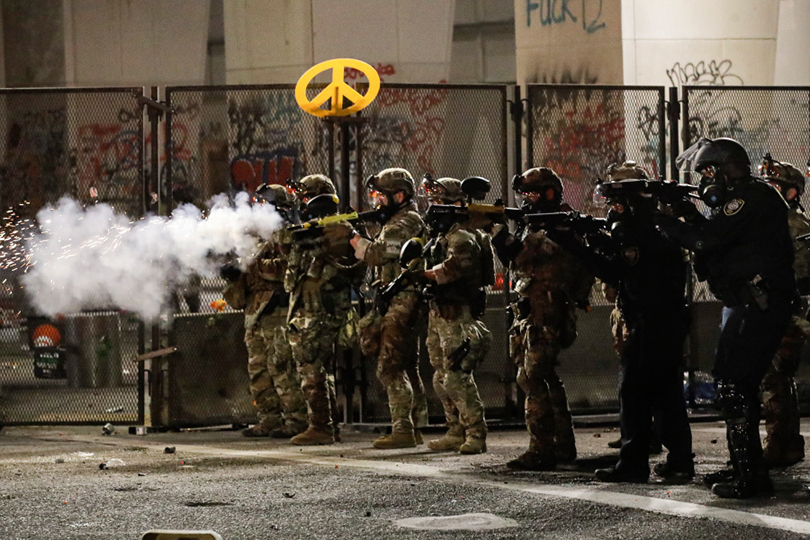 As the November presidential election grows nearer, the number of theories about what will happen continue to grow. Charges about fraudulent ballots and denying citizens the opportunity to vote are heard on a nearly continuous basis.

One of the more interesting theories is that in the election confusion, President Trump will refuse to leave office. This led two retired Army officers (Col. Paul Yingling and Lt. Col. John Nagl) to pen a story in Defense One calling on the Chairman of the Joint Chiefs of Staff, General Mark Milley, to order to military to remove the president should he refuse to accept defeat and leave the White House.

The authors wrote, “As the senior military officer of the United States, the choice between these two options lies with you…In the Constitutional crisis described above, your duty is to give unambiguous orders directing US military forces to support the Constitutional transfer of power. Should you remain silent, you will be complicit in a coup d’état.” They went on to mention that the chainman was already complicit in the use of military force against protesters in front of the White House.

Although the article was perceived as a trial balloon set up by pro-Biden people, it raised some interesting observations by those who served in the US Military Officer Corps.

This article was written by two very junior members of the retired officer corps.

In over 244 years, there has never been a threat of a military involvement in a presidential election. And nearly everyone seems in agreement in that. Giving the military any role would only open the door to more intrusive actions in the future.

In the US, the dividing line between civilian control of government and the military is noticeably clear. In 1952, General Dwight Eisenhower even had to resign his position as a retired general to become president. It was only after he left office that President Kennedy reappointed him to the rank of General of the Army – thus reinstating his military pension.

Although there has been much made about the ambiguity that this election may create, the rules that govern a contested result are clearly outlined in the 20th Amendment of the Constitution. Trump’s term as president ends at noon on January 20th, 2021 – period. He must have clearly won reelection to be re-inaugurated.

Without going into all the details (this case may be even more complicated as Biden may be incapacitated after winning, but before taking office), the House of Representative has the authority to choose an acting president if the Electoral College is unable to pick a president and vice president in time. That person will remain acting president until the mess is cleared up. If necessary, the Senate picks the vice president.

Therefore, there is little room for the type of ambiguity that would allow Trump to remain in office and force a military operation. It is very doubtful that the military would rally around an illegal Trump or Biden presidency in the clear outcome of an election or vote by the House of Representatives for an acting president.

Condemnation of the article was from both sides of the political spectrum.

Retired Army General Raymond Thomas, former head of the US Special Operations Command tweeted that the article was “really irresponsible.”

Although the law and the Constitution clearly leave the military out of the 2020 presidential election, the New York Times did raise a situation that might involve the military in a post-election fracas.

NYT reporter Ben Smith reported on August 2, that a group of former government officials called the Transition Integrity Project had gamed several scenarios for the election. One was where Trump wins the electoral vote but loses the popular vote to Biden. The narrow lose by Biden comes from a close vote in Pennsylvania, which takes weeks of recounting the votes.

Rather than concede, the person who was acting as Biden in the game (John Podesta, former Hillary Clinton campaign chairman) claimed voter suppression and persuaded the Democratic governors of Wisconsin and Michigan to appoint pro-Biden electors.

According to the NYT, “In that scenario, California, Oregon, and Washington then threatened to secede from the United States if Trump took office as planned. The House named Mr. Biden as president; the Senate and White House stuck with Mr. Trump. At that point in the scenario, the nation stopped looking to the media for clues and waited to see what the military would do.”

Again, this could be a trial balloon. And, as in the earlier scenario, state laws are clear that the winner of that state’s presidential vote have their electors vote for the state’s winner.

This leaves the threat of California, Oregon, and Washington seceding. All three states threatened it after the 2016 election and California even went so far as to circulate a petition to put it on the 2018 ballot (the petition failed to get enough signatures from California voters).

The secession of these three states would have dramatic strategic consequences. The Navy’s largest Pacific port is in San Diego. If Hawaii were to secede (likely if states start to leave the US), that will take the Naval Base at Pearl Harbor out too – leaving the US with no major naval facilities in the Pacific. This would be disastrous at a time when the US and China are clearly positioning themselves for a potential war.

In such a situation, Trump may be willing to let some of the states secede but would insist that the naval ports along the Pacific Coast and other Army, Air Force, and Marine bases remain in US hands. This would undoubtedly include reinforcing these facilities from the encroachment by any of the state forces.

Or the states may prefer to occupy these military bases themselves.

It is interesting to note that the US Civil War begun in the same way, when the US federal government reinforced the fort in Charleston, South Carolina’s harbor in the days leading up to hostilities. It was when Confederate forces began bombarding the fort (Fort Sumter) that the Civil War began.

Although threats made in the days leading up to a presidential election are common, these issues must be considered.

America is in the middle of growing civil unrest. Several cities like Portland, Chicago, New York City, and Seattle have become nearly ungovernable due to constant protests and some riots. When Trump called on federal police to go to Portland to protect the federal courthouse, many agencies in the government did not want to become involved.

There are many unresolved issues in this election. While past presidential elections have been resolved on Election Night, this one may take weeks before a winner is declared. Democrats are pushing for more clarity and guarantees in the election process, while the Republicans are fighting widespread use of mail in ballots.

And there is the ongoing Covid virus issue that overshadows everything.

The longer that it takes to declare a clear winner (if possible) the greater the risk of more unrest.

It is quite possible that gunfire will punctuate this election season. However, the gunfire is unlikely to be coming from the military.