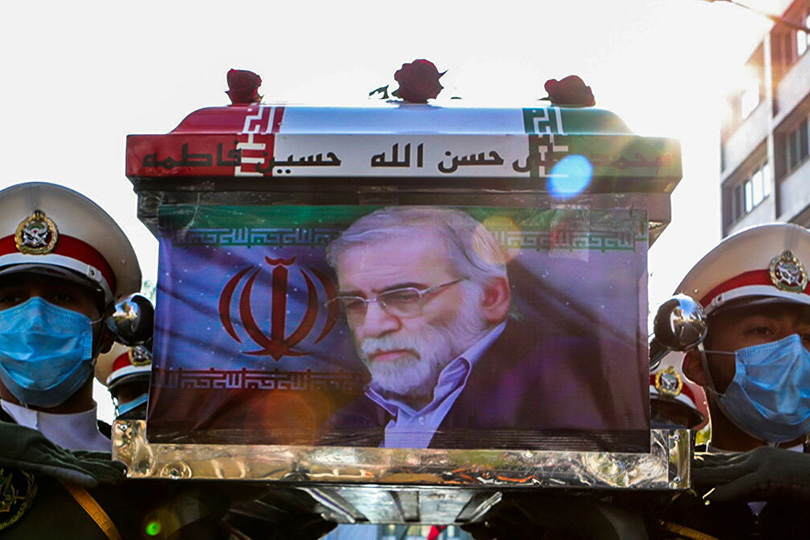 The assassination of Mohsen Fakhrizadeh poses many short terms and long-term questions. First, how was the killing done and who is responsible? How will the US and Iran react? And finally, how will this impact the incoming Biden Administration and its future relations with Iran?

Mohsen Fakhrizadeh has been a potential target for Israel and the US since the Bush presidency, when his claimed assets in the US were frozen. Although compared to the Father of the American Atomic Bomb Robert Oppenheimer, his specialty was not nuclear physics.

It appears that his area of specialty was miniaturizing the nuclear warhead and making it rugged so the warhead could survive its reentry into the atmosphere. There is also the production of an ablative material to protect the warhead from temperatures caused by reentry and design of the whole warhead package. According to US analysts these are technologies that aren’t as easily solved as the basic physics of a nuclear weapon and have not been solved yet by the Iranians given the known state of their current ballistic missiles that have been tested.

Although there remain many questions, it appears that this was a remote-control assassination. An unofficial Fars source claims the attack was done without any killers onsite and with a remote-controlled firearm. The assault took three minutes as the scientist and Revolutionary Guards general was heading east out of Tehran. When Fakhrizadeh left his armored car, he was hit by a gun attached to a Nissan automobile that was about 150 meters away. After hitting the general, the Nissan exploded.

Some military experts claim that the gunfire was too accurate for a remote-controlled device and human snipers were present. However, such technology is readily available in the US, and therefore Israel.

ATN (the American Technology Network) is the producer of many optical instruments used by the American special forces, including night vision, and thermal devices. They have produced day and night rifle scopes that can be operated remotely. Not only does it have ballistic calculators to ensure accuracy, but the information from the scope can also be sent to a remote site. One example is the discontinued ATN X-sight II HD day and night rifle scope, which can be viewed on the manufacturer’s website.

These technologically advanced rifle scopes are export controlled, which indicates that the assassination was limited to either the US or a close US ally like Israel.

A scope like this, along with a set of remote-controlled servos could have little problem carrying out an attack like this.

This does not necessary imply that ATN or the US government was involved but cannot be ruled out. It merely shows that the technology is available at a commercial level.

Reaction to the Assassination

On Sunday, the Iranian parliament retaliated by authorizing the enrichment of Iranian uranium to 20%. Although this is not enough for a traditional nuclear device, it signaled that Iran was moving closer to enriching their uranium up to weapons grade.

The parliament also voted to restore the old design to the Arak heavy water reactor, which will allow to produce plutonium. Plutonium is critical for smaller, more sophisticated nuclear devices.

The Iranian parliament speaker Muhammad Qalibaf confirmed that “The draft law on strategic measures to lift the sanctions will limit the terrorist acts waged by the enemy against Iran.”

It is the hope of the Iranian government that by pressing forward on uranium enrichment and plutonium production, they can force European governments to put pressure on Israel and the US.

In the meantime, there are actions that are taking place throughout the region. Israel has put its embassies and diplomatic compounds on a high alert.

The US has also taken military measures. President Trump ordered the American nuclear aircraft carrier USS Nimitz back to the region. The Navy denied that the move was related to the assassination and was only taken to protect US troops being withdrawn from Afghanistan and Iraq.

The US Navy said, “It was prudent to have additional defensive capabilities in the region to meet any contingency.”

Although some have claimed that the Nimitz deployment proves that the US is planning an attack, US naval doctrine says otherwise. When taking any major military action, the US Navy prefers to deploy nuclear carriers in pairs. This move is more likely a preventative move rather a prelude to an attack on Iran.

If the US were planning a missile attack, they would be more likely to deploy missile carrying ships like submarines, destroyers, and cruisers.

It is unknown if Iran will retaliate given the US presidential transition. Biden is seen as more friendly towards Iran and any Iranian retaliatory action would only tie Biden’s hands.

However, Tehran has accused Israel of seeking a full-scale war before Trump leaves office.

Iran’s options are limited. They can orchestrate an attack through its allies in the region.

Iran could try to carry out an assassination against an important Israeli, but it appears that there are few Iranian assets in Israel and Iran doesn’t have the ability to carry out a human free, remote control attack as Israel did.

Iran can also carry out a military action against the Strait of Hormuz to cut off oil exports by the GCC nations. However, given the rapprochement between the GCC nations and Israel, such a move would only drive them closer to Israel. In fact, the GCC nations may even grant the use of their military facilities to carry out an attack on Iranian nuclear assets. This does not even consider the possibility that European nations may join the US and the GCC in stopping Iran.

Despite the Biden election, the chances of the US reentering the Iranian nuclear deal is virtually nil.

First, the actions by the Trump Administration over the last four years have made going back to the status quo nearly impossible. Additional sanctions against Iran have been taken and their status would have to be negotiated prior to renewing the deal.

Then, there are Iranian actions like their parliament passing a law that allows the increase of nuclear activities like increased uranium enrichment. Would the US allow Iran to keep that enriched uranium? That is unlikely. Arrangements for eliminating the uranium would have to be arranged (if Iran would even agree to that), along with some payment compensation by the US.

Although Biden was Obama’s Vice President, he is not Obama, and he doesn’t have the same goals. The Iranian nuclear deal was to be the centerpiece of the Obama foreign policy. It took years to cobble together an agreement and there was accusation that Iran was hiding secret nuclear activities early on. Biden has no obligation to reenter the deal. Besides, there are other foreign policy issues that may capture Biden’s attention.

Then, there is the political impact of reentering the Iran nuclear deal. Under Obama, the deal had no chance of being ratified by the US Senate, even when the Senate was under Democratic control. With a slender Republican control of the Senate, ratification is impossible and there could be embarrassing questions asked in Senate committee hearings if Biden tries to make the deal an executive action as Obama did.

At this point, Iran realizes that any deal would only be an executive action by Biden and easily abrogated by the next administration. In addition, any funding for the deal would have to pass Congress, including a potential Republican Senate.

Is Iran willing to make any deal that can be cancelled by the next president?

Finally, the Trump supporters are against any such deal with Iran. Trump campaigned in 2016 against the Iranian nuclear deal and there has been no change of mind by his voters. Biden would have to invest considerable political capital on any revived deal with the Iranians.

Besides, the US has another option – collaboration with Israeli intelligence. It worked when the US and Israel sabotaged the Iranian centrifuges to slow the Iranian enrichment program. It also helped to slow nuclear development as Israel assassinated several Iranian scientists. And it is possible that the US had its hands in the recent sabotage of Iranian nuclear facilities.

The Israeli option is much “cleaner” than high profile missile strikes that could justify an Iranian response. Israel obviously has an effective intelligence network in Iran that can carry out everything from sabotage to high tech assassinations.

Although many of Biden’s more progressive political allies may yearn for better relations with Iran, American foreign policy does not “turn on a dime.” Biden must deal with Trump’s hard and sabotaging previous actions. That will take months at best.

Then, there is the question of how much Iran wants to close a deal with the US. For forty years, Iran has enjoyed “twisting the tail of the American eagle.” It has given them status in corners of the world, where the US is disliked.

There is an American saying that “It takes two to tango.” In other words, it takes two sides, who are interested in making a deal, to successfully complete any negotiation.

At this time, there is no evidence that just having Biden in the White House will dramatically change relations between the US and Iran.