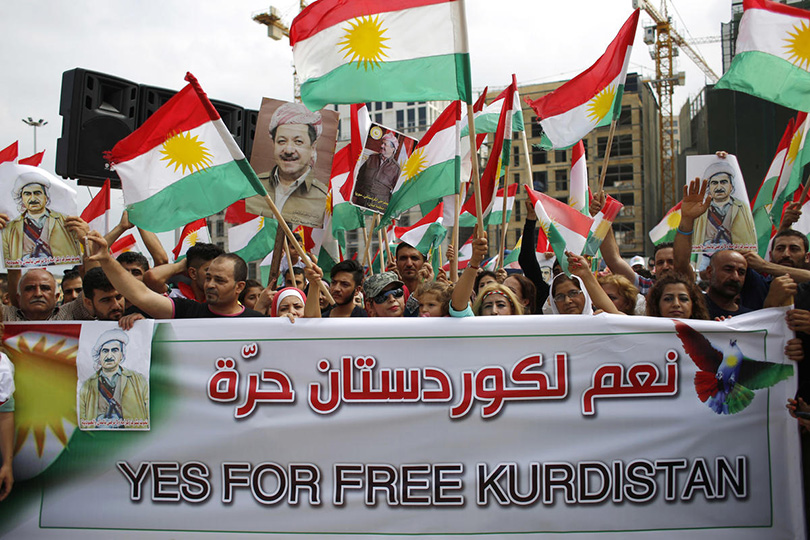 Since Monday, Turkish tanks have lined the nation’s main border crossing with Iraq’s Kurdish region. Their presence not only sends a clear signal of Turkey’s opposition to the Kurdistan Regional Government’s (KRG) independence referendum, which is scheduled for tomorrow; they also serve as a first line of defense against possible instability caused by the vote, Turkish officials have said.

Despite weathering fierce criticism from neighboring countries and the United States, Masoud Barzani, the president of Iraqi Kurdistan, has vowed to push ahead with the vote, with only Israel voicing support among the international community. If successful, the referendum could create a long-sought Kurdish nation ruled by one of the largest minority groups in the Middle East. While the result would be non-binding and may not lead to immediate autonomy, opponents say a win for “Yes,” which analysts predict, could spark civil war and fuel Kurdish autonomy movements across the region.

On Saturday, the Turkish parliament held an emergency vote, extending a mandate that allowed Turkish troop deployments in Iraq and Syria, further heightening tensions between the neighboring countries. “New crises in the region, such as bids for independence, could spark new conflicts and must therefore be avoided at all costs ... We urge Iraq’s Kurdish Regional Government to abort the steps they have taken in that direction,” Tayyip Recep Erdogan, the president of Turkey, told the United Nations General Assembly on Tuesday.

For Turkey, the referendum poses the risk of galvanizing Kurdish nationalism, which the nation has historically suppressed within its borders through decades of armed conflict, and by outlawing Kurdish-language education and television programming. Ankara made its opposition to Kurdish aspirations clear when the Iraqi Kurdish federation was established during the first Gulf War in 1991 with U.S. support. Over time, that initial discord between Turkey and the KRG evolved into economic links and cooperation. Though Kurdish-Turkish relations have improved, the persecution of Kurds within Turkey continues to this day.

This is the result of different circumstances north and south of the Turkish border. Over the last decade, Turkey and the KRG have fostered mutually beneficial ties, most notably with the construction of a pipeline allowing the landlocked Kurdish region to export oil across Turkish soil. Their negotiations over such endeavors regularly bypassed Baghdad, riling Iraqi officials. Yet with Monday’s vote, that partnership is at risk of crumbling under the prospects that Kurdish forces in Iraq and northern Syria could unite, posing a security threat to Turkey, as Can Acun, a researcher at the Foundation for Political, Economic and Social Research, a pro-government think tank based in Ankara, told me. “In the long-term, this could be the starting point for a larger, united Kurdistan,” Acun said. “That is why Turkey could sacrifice its economic gains to prevent the establishment of a greater Kurdistan.”

Turkey’s hostility towards Kurdish autonomy dates back to 1923, when the young nation, still reeling from the collapse of the Ottoman Empire, fended off foreign occupying forces to reclaim much of what constitutes modern-day Turkey. As regional borders were redrawn, Turkish leaders tried to forge unity among their Greek, Jewish, Armenian, Alevi and Kurdish citizens by encouraging them to embrace their new Turkish identities. Vestiges of these nation-building efforts can be spotted to this day in Turkey, where mountains and school courtyards are still adorned with the words of Mustafa Kemal Ataturk, the republic’s first president: “Ne mutlu Türküm diyene” or “How happy is one who says, I’m a Turk.” The phrase has been etched into the national psyche, setting clear limits for minority groups, and discouraging expressions of divergent identities. From the beginning, to be a Turk has meant the shedding or negating of other allegiances. For this reason, the concept of Kurdish autonomy anywhere in the region poses a very literal existential threat to the Turkish Republic.

Kurds remain the Middle East’s largest stateless minority group. Their population of 25 to 35 million people is divided between Iran, Syria, and Iraq, with the majority residing in Turkey, where they constitute about 20 percent of the population. This sizable minority has tried to secede several times, but since the 1980s, efforts toward greater Kurdish independence in Turkey have been largely subsumed by a militant insurgency led by Abdullah Ocalan, founder of the Kurdistan Workers’ Party, whose guerrilla war has led to more than 40,000 deaths over the last three decades.

In the early years of his presidency, Erdogan took significant steps to improve relations between Kurds and the Turkish state. The government implemented a ceasefire in 2013 following direct peace talks between Erdogan and Ocalan. Previous restrictions on Kurdish-language education and television programing were also dissolved. Yet the truce was short-lived, as fighting between Turkish forces and Kurdish militants broke out once again in 2015. Many of the Turkish government’s more inclusive reforms have since been repealed.

The failure of the peace negotiations was exacerbated following last year’s failed coup attempt, which led to a crackdown on opposition groups in Turkey. Nine elected officials from the pro-Kurdish People’s Democratic Party (HDP) are currently imprisoned, and hundreds of Kurdish media outlets and NGOs have been shuttered, with their staff jailed on charges including “membership of a terrorist organization” and "threatening the indivisible unity of the state.”

With no end to Erdogan’s ongoing post-coup purges in sight, Kurds in Turkey may be keen on using the Iraqi referendum as fodder for renewed autonomy campaigns within Turkey’s borders. “Imagine if you have an independent Kurdish state right across your border and at home you are not letting Kurds have education in their mother tongue … That’s going to make it very difficult for [the Turkish government] to maintain its current Kurdish policy,” HDP Vice Co-Chair Hisyar Ozsoy said.

According to Ozsoy, HDP officially supports the Iraqi Kurds’s right to self-determination, but the party has not endorsed a position on the vote due to the lack of consensus among Kurdish groups in Iraq prior to announcing the referendum. Barzani’s Kurdistan Democratic Party, which has been accused of rampant corruption, moved forward on plans to hold the vote largely on its own at a time when the KRG parliament had not met for over two years. Since then, the KRG’s other parties have come to an agreement on holding the referendum, but Ozsoy said the initial missteps might be partly at fault for the lack of international support.

Brett McGurk, U.S. special envoy for anti-ISIS operations, has also criticized the vote for potentially interfering with ongoing operations against the Islamic State. Yet after the fall of Mosul and the eradication of ISIS militants from most Iraqi Kurdistan territories by Kurdish forces, Barzani may be trying to ride a wave of enthusiasm to finally achieve his goals. “Ultimately, it’s never going to be a good time for the Iraqi Kurds to become independent,” Amberin Zaman, a veteran Kurdish analyst, told me. “This has been going on for nearly a century.”

While the referendum poses significant risks for the region, Zaman said that Iraqi Kurdish officials might view the convergence of recent events as giving them their best shot at independence. “[For the KRG], in many respects this is the best possible time, bearing in mind that Kurds were allowed to gain control of disputed territories, the fact that the central government in Baghdad is weak, [and] that potential aggressors, the Shia militias are exhausted by this battle against the Islamic State,” he added.

Still, the possibility of Turkish and Iranian intervention during or after the vote remains a real concern. KRG control over the oil-rich province of Kirkuk has aggravated regional powers since 2014, when Kurdish peshmerga forces seized the territory after Iraqi forces fled the advance of ISIS. The area produces most of the KRG’s revenues, and is home to a mix of Kurds, Arabs and Turkmen, all of whom stake claims over Kirkuk. Because Turkmen share ethnic roots with Turks, officials in Ankara have long cited the need to protect them as an excuse to exert more pressure on the KRG. In August, Devlet Bahceli, the leader of Turkey’s far-right Nationalist Movement, denounced the inclusion of Turkmen cities in KRG territories that would be annexed through the referendum, and threatened war on Iraqi Kurdistan if the vote went forward.

Amed Dicle, a Kurdish journalist, told me that Turkish officials actually did little to protect Turkmen from ISIS attacks in recent years, and were only playing the “Turkmen card” to incite nationalist support for future military actions. “Turkey does not care for the Turkmens at all,” Dicle wrote in an email. “Turkey just uses them as an instrument.” The Turkish Ministry of Foreign Affairs did not respond to requests for comment.

While Turkey may well intervene in the Iraqi Kurdish referendum, several analysts said Erdogan would have little to gain from doing so. On the contrary: Some argue that stronger economic ties with an independent Iraqi Kurdistan could prove lucrative. Some 1,300 Turkish companies already operate out of the region. The KRG also exports at least 550,000 barrels of oil per day through its pipeline via Turkey. The Russian oil company Rosneft has also recently agreed to expand existing infrastructure to export natural gas from Iraq’s Kurdish region to Turkey and, potentially, Europe.

“Turkey can, in the long run, position itself as a major beneficiary of this situation,” Sinan Ulgen, a visiting scholar at Carnegie Europe who focuses on Turkish foreign policy, told me. Despite recent criticism, Ankara has the option to cooperate with “this new entity, which will be reliant on Turkey for its links to the outside world.”

Many questions hang over Monday’s vote. For regional and international observers, the answers will only begin to take shape in the days that follow.