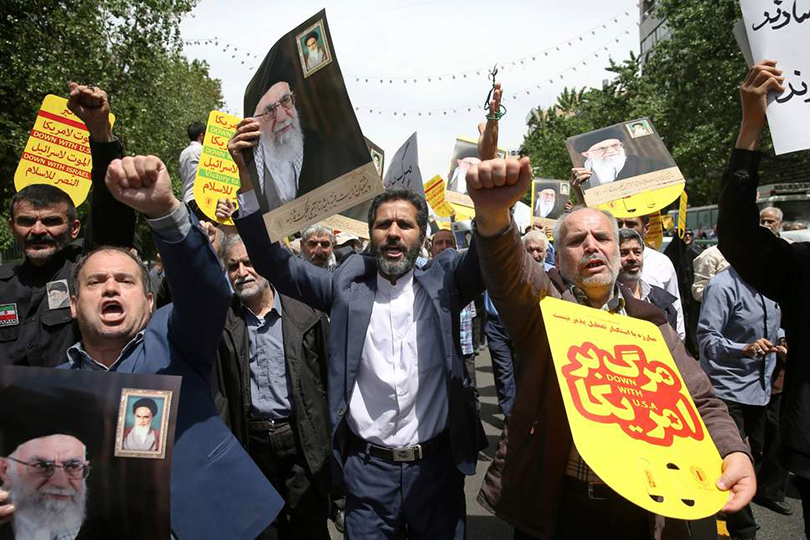 Washington should use its military soft-power to help Iranians and further drive a wedge between Iranians and the IRGC as well as isolate the IRGC ideologues within the system.

It has now been one year since Secretary of State Mike Pompeo outlined twelve U.S. demands on Iran and announced that, to get Tehran to comply, Washington would “apply unprecedented financial pressure on the Iranian regime.” President Donald Trump’s “Maximum Pressure” campaign is now in full swing. While critics argued administration demands are tantamount to regime change, there is no reason why any country, organization, or analyst should oppose what Pompeo outlined: full Iranian transparency with regard to its nuclear program, and end to terrorism and support to proxy terrorists. Terrorism, after all, has never been part of Iranian culture; to suggest no change is possible is to accept defeat and erase norms of international behavior developed over a century.

Many critics of Trump’s policy honestly and legitimately want Iran to change its behavior, but believe that the strategy which the Trump administration pursues is counterproductive. The irony, however, is this: Both those who seek conciliation toward Iran and those most supportive of crushing sanctions on Iran get it wrong.

First, consider the mistakes made by the anti-pressure crowd: The notion that pressure on the Islamic Republic doesn’t work is historically inaccurate. Consider three examples: First, when Iranian radicals seized the U.S. Embassy, the regime repeatedly swore never to release them until the United States met a series of demands that escalated in proportion to the desperation with which President Jimmy Carter’s administration sought to engage Ayatollah Khomeini. But, facing debilitating isolation made worse by the crisis of the Iraq war, Khomeini eventually let the hostages go, most demands unmet.

Then there was the end of the Iran-Iraq War. Iranian forces had largely stopped Iraq’s advance by 1982 and started to push back Iraqi forces. Khomeini considered an armistice then, but the Islamic Revolutionary Guard Corps (IRGC) convinced him to continue the war effort until not Baghdad but Jerusalem was liberated. There followed another six years of war which claimed perhaps a half million more lives. Finally, so exhausted by the war effort and calculating the costs too great to bear, Khomeini got on the radio and announced an end to hostilities, with not only Israel untouched but Saddam Hussein’s regime still in power just 110 miles away from the Iranian border.

Then there was the negotiations that led up to the Joint Plan of Action (the interim agreement that preceded the Joint Comprehensive Plan of Action). Iranian president Hassan Rouhani acknowledged in the run-up to those negotiations that Iran’s GDP had declined by 5.4 percent; the desire to escape economic collapse brought Tehran to the table. Subsequent negotiations did much to relieve that pressure—and any American leverage—leading to the dilution of what, before that time, had been the counter-proliferation baseline established in Soviet successor states, South Africa and Libya.

Proponents of conciliation also underestimate how incentives backfire. Consider thistweet by former Obama-era nuclear negotiator Wendy Sherman: “When Europe began negotiating w/ Iran in early 2000s, Iran had 164 centrifuges. After punishing sanctions imposed and enforced, crushing their economy, Iran had 19,000 centrifuges by 2013.” What Sherman omits is that between 1998 and 2005, Iran-European Union trade almost tripled and the price of oil quintupled. During that period, Iran invested perhaps 70 percent of that hard currency windfall into its ballistic missile and covert nuclear programs. The problem, therefore, was not too much coercion but rather too much diplomacy.

If pressure works and the diplomatic approach falls short, then where do the hawks go wrong? Across the aisle, every American official understands that the problem is not Iran itself or the Iranian people, but rather the regime that oppressed them and channels their resources to malign activity. The issue then becomes how to address the regime. To excise a tumor, it is possible to use either an axe or a scalpel, but the patient is only going to survive the latter. If the goal is to have Iran, post-Islamic Republic, rejoin the international community quickly and smoothly, then it is important not to crush the economy beyond repair. Here, the example of Iraq provides lessons. Few people remember that, in the 1970s, Iraq used to be the least corrupt Arab government. But decades of war and sanctions encouraged corruption and eroded the legitimate economy. To this date, the Iraqi people still struggle to address the dysfunctional corruption which has become endemic in their society.

Simply put, there is no scenario in Iran, be it muddle through reform or full-out regime change which is not preceded by the collapse of the IRGC. It is to this, then, that U.S. policy must focus and it is this aim which both hawks and doves among the Republican and Democrats fall short.

Iran today is one of the few countries in the Middle East which has independent trade unions. These should be supported, not only by European Greens and progressive Democrats but also by any conservative who believes in individual liberty. The issue is not the expectation that ordinary Iranians should support U.S. foreign policy but rather more mundane: the more the Iranian leadership must pay back wages to its own workers, the less funds they have available to fund terror. Nor should anyone shed any tears if strikes in oil fields or other hard currency earners hit the budget of the IRGC or spark larger protests.

Traditionally, the Iranian regime has always but without success tried to deflect blame for economic failure upon the United States. This might change with the crowing of Trump administration officials and their chief outside supporters. Therefore, it is crucial to reinforce that the United States sides with the Iranian people and that the sole problem is the regime. Here, we can take a lesson from the U.S. approach to Venezuela: Several times, the United States has dispatched a hospital ship to Colombia to treat Venezuelans both for humanitarian purposes and to demonstrate the failures of the Venezuelan systems. Given how much resentment the Iranian failure to adequately support its war-wounded and veterans causes among IRGC and regular Iranian army veterans, the Trump administration should send the USNS Comfort or another Mercy-class hospital ship to Dubai and offer free medical care for Iranian veterans. Either they will come to Dubai to take advantage of world-class treatment unavailable in Tehran or the regime will prevent the embarrassing spectacle of IRGC veterans streaming to Dubai for treatment and risk sparking further resentment within the IRGC. In the past, the United States has eviscerated Iranian propaganda and won plaudits within Iran forrescuing distressed Iranian sailors. There is no reason why we cannot use our military soft-power to help Iranians and further drive a wedge between Iranians and the IRGC as well as isolate the IRGC ideologues within the system.

This, of course, is just the tip of the iceberg. The United States can bring far more to the table to aid and assist the Iranian people and to undermine the legitimacy of the corrupt system that oppresses them. But, until there is a comprehensive strategy to fracture the IRGC, any diplomatic effort or maximum pressure campaign is going to fail to achieve its objectives and risks driving a wedge instead between the Iranian people and the United States for either seemingly siding with the regime as occurred under Obama or, conversely, by punishing them for the regime’s ills as has occurred somewhat under Trump.