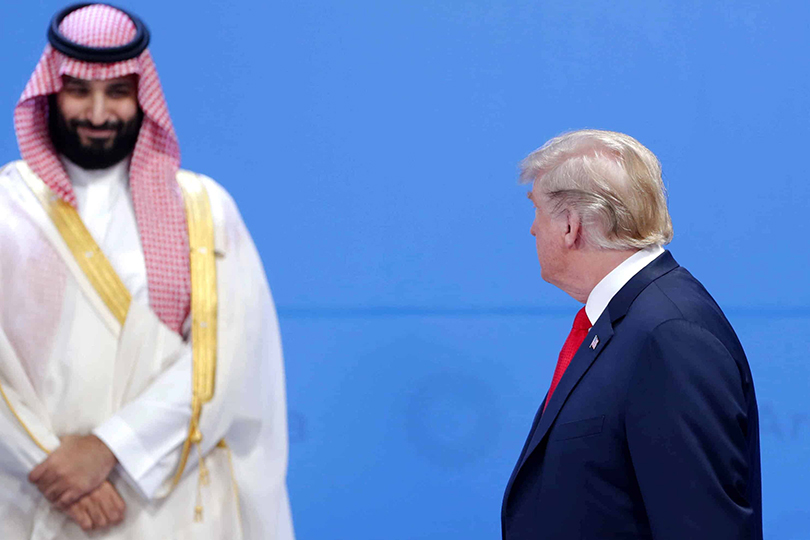 The bipartisan bill follows the revelation that a longtime Trump advisor was pushing for lucrative nuclear deals with Riyadh.

bipartisan group of lawmakers is introducing new legislation aimed at restricting the transfer of nuclear technology to Saudi Arabia, the latest sign of growing congressional backlash to the Trump administration’s close relationship with the wealthy Gulf nation.

“We should never allow nuclear material to fall into the wrong hands, and certainly the [Saudi] crown prince and this regime have demonstrated they can’t be trusted,” said Van Hollen in a phone interview.

The legislation comes on the heels of a bombshell new report from a House oversight committee that alleges a longtime associate of U.S. President Donald Trump, the wealthy businessman Thomas Barrack, was using his relationships in the White House to advance lucrative business deals on nuclear power in Saudi Arabia and stood to profit from the efforts.

The report, released by Democrats on the House Oversight Committee on Monday, “exposes how corporate and foreign interests are using their unique access to advocate for the transfer of U.S. nuclear technology to Saudi Arabia,” Rep. Elijah Cummings, the Democratic chairman of the committee, said in a statement.

Van Hollen and Graham’s bill, according to a draft obtained by Foreign Policy, would bar the Export-Import Bank from funding such transfers to Saudi Arabia unless Riyadh renounces uranium enrichment and reprocessing, establishes a nuclear cooperation agreement in line with the Atomic Energy Act that regulates civilian nuclear energy, and adopts additional safeguard protocols in line with the International Atomic Energy Agency. Republican Sen. Jerry Moran and Democratic Sen. Jeff Merkley are also co-sponsoring the bill.

The legislation would also require the bank to report to Congress details of any agreement on nuclear transfers to Saudi Arabia. One such proposal is already underway. The Export-Import Bank in 2018 received an application to finance U.S. exports for a proposed nuclear power plant in Saudi Arabia, according to an email sent by a senior Export-Import Bank official to Senate staff, obtained by Foreign Policy. “The application is in the early stages of review,” the official wrote in the email.

Critics of the Trump administration say it is not requiring Saudi Arabia to use the so-called “gold standard” in a nuclear cooperation agreement, which requires a foreign country to commit to not using transferred nuclear technology to make nuclear weapons.

Van Hollen said the Trump administration has not been transparent with Congress on its push to transfer nuclear technologies to Saudi Arabia. “This administration’s been secretly moving ahead to try to transfer nuclear technology to the Saudis without appropriate oversight and without appropriate conditions,” he said. When Congress asks for more information, “they’ve been totally opaque, they’ve been dragging their feet, they’ve not been providing information,” he said.

The Trump administration has locked horns with Congress for months over the United States’ relationship with Saudi Arabia in the wake of Riyadh’s role in the deadly conflict in Yemen and Saudi officials’ roles in the murder of the Washington Post journalist Jamal Khashoggi last year.