The U.S. Government Is Vulnerable to Virus Chaos 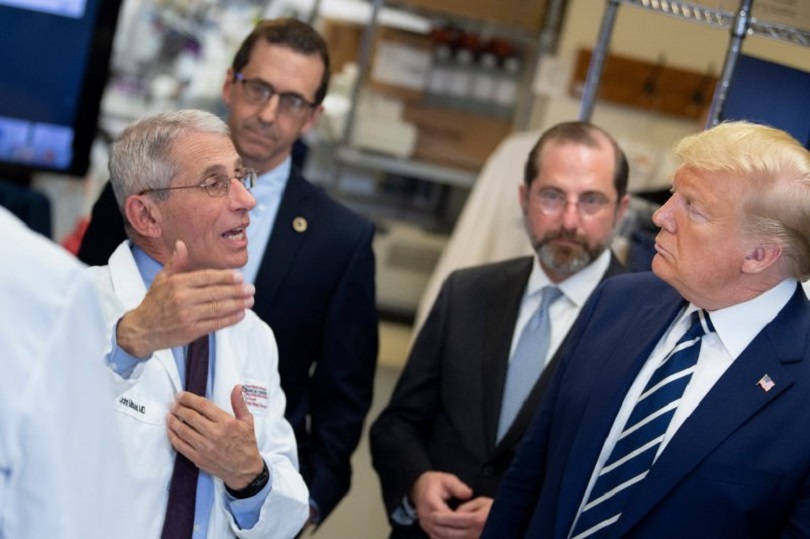 Reshaping institutions and funding can help save lives.

he outbreak of the coronavirus that originated in Wuhan, China, has become both a global public health crisis and a political wild card. A collapse in faith in government competence or inequality in access to vaccines and treatments could reshape politics rapidly and unexpectedly. Whether the coronavirus disease, or COVID-19, could kill a significant number of Americans is not yet clear, but it is vital that the U.S. government proceed as if the answer is yes.

Hope now hangs on a combination of both human and natural factors that might slow the outbreak or mitigate its effects—a situation that does not inspire optimism. Of particular concern are countries that are unable to effectively collect data and respond to the outbreak, due to weak health systems or weak governance, projecting their vulnerability far beyond their borders. The more people infected with the virus globally, the more vulnerable Americans become, both from a public health and an economic standpoint. Our common defense is only as strong as the weakest link.

The structures and policy of the U.S. government contribute to this vulnerability. Addressing the problems is within the power of Congress and the administration. Doing so is of both immediate and long-term importance. The coronavirus emergency spending bill before Congress now is an important vehicle to correct some of these problems, but the requirements are too big to be solved with a single piece of legislation. The White House and Congress must also get their own houses in order.

The shifting White House leadership structure for the coronavirus response is both atypical and ad hoc, leaping from an interagency health security process run by National Security Council (NSC) staff to a cabinet-level process then to one led by the vice president. White House leadership of the response is critical, since no matter how dedicated and capable any one agency or department may be, it simply cannot effectively coordinate across accounts, jurisdictions, missions, and personnel as required. The interagency coordination will be led by Deborah Birx—a serious professional, as capable in interagency management and global health as anyone in government. With no time to spare, the White House has backed into the place it should have been all along, prior to the possibility of an outbreak.

While the leap from NSC staff to the vice president demonstrates an appropriate sense of urgency, it also reveals the gaping hole in the regular decision-making structure. Prior to the creation of the president’s task force, the White House seemingly went backward on global health security, downgrading and eventually eliminating the global health senior director position at the NSC. It sent additional signals of disinterest to Capitol Hill, reluctantly producing an interagency global health security strategy only once Congress required it by law.

The leadership hole is in part due to the desire to reverse creeping NSC staff bloat—a point on which National Security Advisor Robert O’Brien is correct. However, in this case, the limitation is not the number of seats at the NSC but the lack of value placed on the implications of health for U.S. national security and on the significant interagency coordination demands. Even outside of a crisis, global health is a priority to which the U.S. government commits billions of dollars each year across many accounts, agencies, and departments. This type of challenge is why the NSC was created.

Even after this crisis is resolved, the question that must be asked is how the White House will plan for the next one. Some structural leadership problems are architectural and cannot be addressed by policy course corrections alone. In health security, the division between domestic and international affairs that is reasonable and practical in many other areas can be especially problematic. Disease respects no borders. Yet a decision-making framework established ahead of a crisis to provide clarity on thresholds for action, department and agency roles, and interagency chain of command can save precious time, money, and lives.

Critical policies and responsibilities can fall through the domestic-international divide to inattention or confusion, losing opportunities to act proactively outside the United States. If domestic health security and global health security are not understood as two parts of the same challenge, policymakers might look to fortify only the domestic health system. With a disease like COVID-19, such a notion is folly, dangerously missing the implications of rapid, global mobility and the fact that those infected can by be asymptomatic yet highly contagious, defying easy detection.

The emergency supplemental funding request from the White House is a timely example, appearing to go out of its way to avoid focusing on anything other than domestic capacity. Intentional or not, the White House is once again communicating that it does not view domestic health security and global health security as a single, continuous challenge. The distinction in this case makes Americans more vulnerable ahead of an outbreak and can impose very steep economic and public health costs during an emergency.

Congress, where fractured jurisdiction and responsibility for global health security spans at least 10 different committee and subcommittee structures across both chambers, has some housekeeping to do as well. Nearly all have their own leadership, membership, and staff. A comprehensive, funded global health security strategy theoretically could be considered in part by each and all—even before reaching congressional leadership and their staffs and coming to a vote.

Nothing remotely resembling that ever happens. The problem is not that too many parts of Congress are actively engaged in global health security but too few. Divided between domestic and international, national security and public health, no committee has a clear mandate or a view of the full requirements of government. Pathways for asserting leadership are unclear, even for dedicated individual members. The sense of issue ownership is weak.

What can the administration and Congress do to address these problems and the vulnerabilities they create?

First, the Trump administration should use the current White House-led response to reestablish a dedicated, permanent global health security staff structure at the NSC, led at the senior director/special assistant to the president level or higher. This problem can be addressed substantially simply by reestablishing the structure that existed until its sudden abolition last year. Additionally, the White House Office of Management and Budget should establish a senior staff role to ensure consistency and execution of funding and management decisions across all agencies and accounts—domestic and international—as the George W. Bush administration did effectively.

Second, House and Senate leadership should both establish separate cross-committee, bipartisan special committees or formal working groups with continuous responsibility for global health security, organized around clearly defined membership, rules, and responsibilities. The two groups would not require their own legislative authorities or separate jurisdictions, instead providing coordination, guidance, and a shared oversight agenda for the regular committees of jurisdiction on which the members already sit. The groups would necessarily include the appropriations committee members in order to ensure alignment of policy and funding.

Third, Congress should enact legislation to establish an international health emergency response framework requirement of the executive branch, providing necessary legal authorities and funding. That would provide doctrine and a defined process to determine when, where, and on what scale the United States responds internationally, what funds would be tapped, and clarifying without a doubt for everyone in government what it is they would be called on to do, by whom, and when. The international framework must be fully complementary of the domestic response framework in scope and detail and similarly incorporated into the national security strategy.

Such a framework is a complex undertaking, requiring constant updating and testing for failure—just as war-fighting plans at the U.S. Defense Department are tested and updated continuously. Answers to questions about whether, how, and when to respond internationally are not likely to be clear prior to it being too late. For the administration and Congress, a substantial amount of their homework on this topic has been done for them. In particular, Jeremy Konyndyk’s excellent analysis and recommendations, based on the Obama administration’s experience with the West Africa Ebola crisis, is practical and accessible—effectively a playbook to approach this requirement.

Fourth, Congress and the administration must better address a market gap and related legal and funding gaps around threats where there’s acute need but, due to poverty or a previously unknown pathogen, almost no actual demand. Many emerging threats in this category fall through a government agency mandate gap between the “upstream” role of basic research and the “downstream” role of health security implementation.

Addressing this global vulnerability requires using significant targeted funds to provide the market “push” for research and development as well as the market “pull” for actual production and supply. The U.S. government on its own cannot create such markets in all cases of epidemic-potential threats in a cost-effective way (if at all), except for a limited set of specific threats linked to U.S. domestic and war-fighter requirements. The administration and Congress must work together expeditiously to identify the needs and barriers of the programs and international partnerships—burden sharing at its best—and address them in law and with funding.

Fifth, the coronavirus is an emergency but not really a surprise. Prioritization of U.S. government funding reliably ignores important aspects of preparing for and responding to an inevitable global health emergency. Global health security now is just one of many competing priorities in foreign assistance, pitted against others in a zero-sum competition for limited funds.

This low prioritization of funding and competition among important programs harms all interests in ways that soon may be measured in lives. In this light, the emergency funding request from the White House looks especially shortsighted for its exclusion of funding for international capacity building and response. Congress must step up and correct this omission.

While a true crisis like the coronavirus overcomes divisions and inertia in government, this is reactive and possibly too late, as proactive options have dwindled rapidly. Crisis-driven solutions can be decisive but don’t necessarily guarantee durable changes. In practice, they often lack essential qualities for success and durability, including clear objectives, leadership endowed with authorities commensurate with their responsibilities, accountability for outcomes, and laws that guarantee funding and require implementation of policies and programs.

Absent the political will to see them through, whole-of-government approaches, comprehensive strategies, and commissions—ideas with real conceptual merit—become tacit admissions of policymaking failure. Important issues are sentenced to a slow death by a thousand experts, creating a dangerous illusion of having addressed a problem.

The good news is that, should the administration and Congress provide the necessary political will, they have a remarkable, timely set of resources created for them for exactly this purpose. These include a proactive commission with timely, actionable recommendations; a comprehensive inventory of global health system weaknesses; an established framework for international cooperation; and even an interagency strategy on the books ready to build out, implement, and fund.

The coronavirus challenge requires that Congress and the administration move together toward shared objectives—a tough proposition in Washington these days. If elected leaders want to be remembered for doing all within their power to protect the country, they must recognize global health security as a national security priority that, left unaddressed, neglects their basic responsibility.