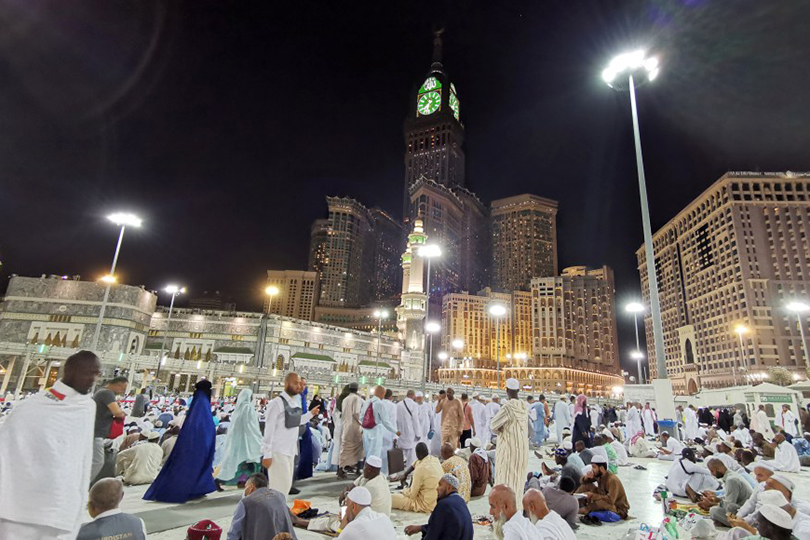 Since the seventh century, Muslims all over the world have visited Mecca, the birthplace of Islam, to commemorate the traditions of the Prophet Mohammad as well as those of Abraham, Hagar, and Ishmael. As a ritual, the hajj is about re-devotion to God, self-sacrifice in pursuit of the right path, and transcendence in communion with others. As memorably captured by Malcolm X in his autobiography, it is a transformative experience for the millions of Muslims who have the means to make this trip.

This year, however, the hajj has become another casualty of COVID-19. Last month, Saudi Arabia banned the hajj for international visitors, drastically reducing the number of people able to perform the sacred ritual. The annual hajj is one of the largest gatherings worldwide, bringing together around 2.5 million Muslims from across the globe. This year the number will be limited to a few thousand.

Muslim governments all over the world acted quickly to restrict travel and congregational prayers to prevent the spread of the novel coronavirus. In February, Saudi Arabia banned foreign pilgrims from entering the country. In Turkey, COVID-19 was traced to a group of Turkish visitors returning from umrah (the so-called lesser hajj) in March. For this reason, Turkey also swiftly restricted public gatherings and international travel.

These measures show that a concern for health and safety has taken priority over rituals. This was the right decision given the current public health crisis. However, Saudi Arabia’s correct decision should not disallow a critical conversation about the problems inherent in Saudi Arabia’s management of the hajj.

This year’s unfortunate circumstances provide a good opportunity for Muslim states and organizations to address some of the core problems surrounding the annual pilgrimage. The solution to these problems is to implement a collective management structure for the hajj. The Organization of Islamic Cooperation (OIC), in collaboration with Muslim minorities and communities, can play a bigger role in regulating and managing the hajj. A symbol of Muslim unity, the hajj is a collective right for all Muslims. The decision making and management of this religious site should be a collective responsibility for all Muslims.

A safe hajj is a right for all Muslims

The hajj is an obligation for all Muslims who are physically and financially capable. Yet many Muslims are denied the right to perform it due to a lack of space and Saudi Arabia’s limited organizational capacity.

In addition to the specific location of Mecca, the hajj should be experienced in a prescribed manner over six days in Dhu al-Hijjah, the twelfth and last month of the Islamic calendar. Around 100,000 pilgrims made the journey in the early 1950s, but this number grew rapidly with the increase of the worldwide Muslim population and the ease of air travel. In the 1990s, Saudi Arabia capped the number by imposing a quota system, pegging the number of pilgrims from each country to its Muslim population. Since the 2000s, the number of pilgrims has fluctuated around 2. 5 million—a tiny fraction of the 1.7 billion Muslims worldwide.

Due to this quota system, aspiring pilgrims wait for years or decades to perform the hajj. Some states instituted a lottery system to determine prospective pilgrims. Many end up performing this physically demanding ritual when they are very old, assuming that they live long enough to be selected.

Second, the hajj decision making system is fundamentally politicized. The wisdom of the Saudi decision this year should not prevent us from seeing the faults in the process: it was a Saudi decision for all Muslims. While all Islamic rituals, such as fasting, combine individual and communal aspects, the communal aspect is the dominant feature of the hajj. It’s a collective ritual that is at the mercy of Saudi Arabia’s unilateral decision making and management.

Saudi control over these religious sites is grounded in international law and sovereignty; not in Islamic theology. According to Islamic teachings, all Muslims have a right to visit Kaaba, which is Bayt Allah or God’s House, for pilgrimage. However, since the early 1980s, the Saudi royal family has increasingly used a religious veneer to legitimize its control, designating Saudi Arabia as the “Custodian of the Two Holy Cities.” This boosts the regime’s legitimacy vis-à-vis Islamist critics and regional rivals, Iran in particular, and it affirms Saudi Arabia’s exclusive authority over the hajj.

In the current system, the hajj has become one more tool in Saudi Arabia’s foreign policy arsenal. The kingdom chooses to keep the quota system as opaque as possible in order to exploit it as a political tool to reward its allies and punish its adversaries. Moreover, Saudi Arabia can facilitate or impede issuing visas. For example, under the Saudi blockade, Qatari pilgrims were effectively denied from performing the hajj because many had difficulties obtaining visas.

There are also health and safety risks. Even before the pandemic, performing the hajj posed public health risks. Hajj accidents are common: buildings and cranes collapse on pilgrims; fires and stampedes lead to multiple injuries and deaths. According to Saudi statistics, from 2002 to 2015, 90,276 people from over 100 countries died while performing hajj or umrah in Mecca. That is about one death per 1,000 visitors. Its physically demanding nature and the age of pilgrims does not fully explain this death rate.

The data shows patterns that reflect global inequality. A study conducted by political scientist Robert R. Bianchi shows high levels of mortality among those pilgrims coming from poor countries. The death rate is three to four times higher among Egyptian or Indian pilgrims compared to Turkish or Iranian ones. The death rate is higher when women comprise a higher portion of the population of pilgrims from a specific country. Higher mortality rates occur during the less regulated umrah. Members of migrant, refugee, and Muslim minority communities residing in Saudi Arabia are also more vulnerable in Mecca. Some of them lack access to formal employment opportunities and thus are attracted to the informal economy created by the influx of pilgrims. Their lack of access to healthcare puts them at a higher risk if they get sick or injured.

Some see it as a blessing to die in holy lands; it is a ticket to paradise after being cleansed of all previous sins. This complacency often inhibits questioning the lack of safety regulations, poor access to health care, and administrative negligence or incompetency. These are the more probable explanations for the high rate of injuries and death.

A safe hajj is the responsibility of all Muslims

The best way to address these challenges is to implement a collective management structure for the hajj. The OIC, in collaboration with Muslim minorities and communities, can play a bigger role in regulating and managing this annual pilgrimage.

Reimagining the hajj calendar to allow more Muslims to attend should be a priority. Incremental changes to expand space around Kaaba may help, but it will not be sufficient. Like mosques allowing multiple Jumaah or Eid prayers, the hajj can be performed by multiple non-overlapping groups.

While some may label such proposals bida’h (innovation, or even heresy) and thus unacceptable, change is nothing new to hajj rituals. Animals are now sacrificed in slaughterhouses rather than by pilgrims in the desert; the Black Stone is saluted from a distance rather than being kissed; overnight stays in Muzdalifa were reduced; younger pilgrims stone the devils on behalf of older pilgrims.

Public health and safety officials should be integral to the hajj’s design, regulation, and management. This year without the hajj provides an opportunity to reimagine this cherished Islamic ritual. It is an obligation, and thus a right and responsibility, for all Muslims.