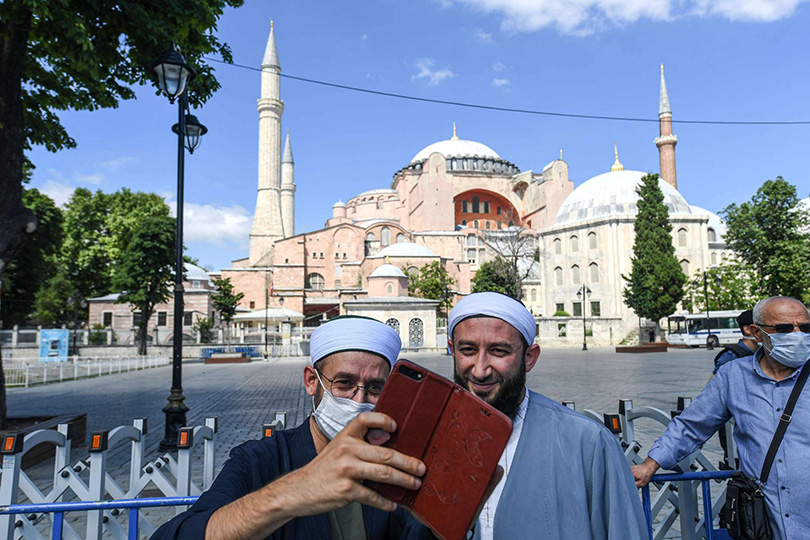 On July 9, Turkey’s Council of State decided to void a 1934 cabinet decision designating Hagia Sophia as a museum. This high court decision followed an intense campaign by the office of President Recep Tayyip Erdogan to convert the nearly 1,500-year-old Istanbul landmark back into a mosque. A 2010 constitutional amendment allowed Erdogan to appoint a majority of the council's current judges, so the decision was not a surprise.

Among other reasons, Erdogan apparently wants to move forward with the conversion in order to reverse the ongoing erosion of his popular base. Yet the decision is unlikely to give him more than a temporary boost in popularity; what it will surely do is undermine Turkey’s international brand as an open, Muslim-majority society at peace with its Christian heritage.

FROM CHURCH TO MOSQUE TO MUSEUM AND BACK

Byzantine emperor Justinian I built Hagia Sophia as a Christian cathedral in 537. In 1453, Ottoman sultan Mehmet II converted it into a mosque shortly after taking the city from the Byzantines. In 1934, following the disintegration of the Ottoman Empire, the government of Mustafa Kemal Ataturk converted the building into a museum. As the founder of modern Turkey, Ataturk believed that opening the building to all people would underline his secularist revolution and help push Islam out of government and public spaces.

Yet just as Ataturk “un-mosqued” Hagia Sophia nearly a hundred years ago, Erdogan seemingly wants to convert it back in order to bolster his religious revolution—one that has steadily flooded Turkey’s government and public spaces with his conservative brand of Islam. Making such a move in Istanbul is particularly important to Erdogan given the city’s deep symbolism in his life and career. Born there in 1954, he emerged on the national political scene after becoming the city’s mayor in 1994, using the position as a springboard to his ongoing run as the most powerful elected leader in Turkey’s history.

For years now, Erdogan has been patronizing major mosque construction in Istanbul as a way of leaving his indelible political and religious imprint there. In March 2019, he oversaw the inauguration of Camlica Mosque, informally known as “Erdogan Mosque,” a massive structure that was erected on a tall hill in order to permanently alter the city’s dramatic skyline. Another major Erdogan-backed mosque is also nearing completion, this one poignantly placed on Istanbul’s central Taksim Square, which has historically lacked a mosque. Converting Hagia Sophia back to an Islamic edifice will complete this trilogy of massive, legacy-defining mosques in his hometown.

BUT WILL IT BOOST HIS POPULARITY?

Erdogan’s mosque push has more nakedly political drivers as well. A nativist, populist leader, he no doubt aims to use the controversy generated by the conversion process to support the narrative of victimization that he often peddles to his base. In this case his message would be, “How dare these secularists deny us pious Muslims the ‘liberty’ to pray at Hagia Sophia?”

This strategy is unlikely to work, however. Since 2002, Erdogan has won more than a dozen nationwide elections primarily on a platform of strong economic growth. Yet once a recession hit in 2018, his popularity began to slip, and his hand-picked candidates lost mayoral elections for Istanbul and other key cities in 2019. The economy is now suffering another recession due to the coronavirus pandemic, and polls show his popularity slipping further. Thus, even if the Hagia Sophia conversion increases his approval rating by a few percentage points, the boost is unlikely to last, and nothing short of strong economic growth will bring back the wider popularity he once enjoyed.

If implemented in full, the building’s conversion would cause significant, potentially irreversible harm to Turkey’s international brand. Maintaining Hagia Sophia as a museum has long represented Turkey’s openness—most notably, its stated willingness to embrace its Christian past, Christian citizens, and Christian-majority neighboring countries. As the nation’s most-visited building by foreign tourists, Hagia Sophia in many ways is Turkey’s global brand.

For officials in Washington and other allied governments considering how best to sway Erdogan from this damaging course, such conversations are likely best conducted in private given the issue’s domestic sensitivities. But if the Trump administration does decide to comment publicly, its statement should highlight Turkey’s long, proud history of religious tolerance—and encourage Ankara to shy away from further steps that undermine this tradition. Turkey should also be urged to maintain Hagia Sophia’s multicultural heritage and allow public access to its religious iconography, taking into account that such access was unhindered during most of the Ottoman era.