At a Breaking Point 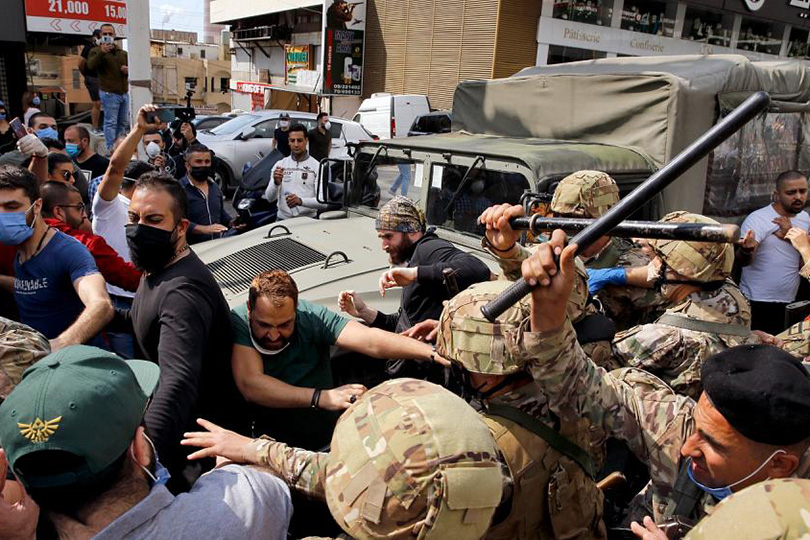 Lebanon is at a breaking point. Its economy is imploding, and with it social stability. The scale of the catastrophe may be more devastating than the fifteen-year civil war. While the country’s politicians understand the depth of the crisis, they have used the coronavirus lockdown as an opportunity to settle old scores and stage a comeback after having endured popular rejection for months.

The Lebanese are facing a perfect storm of challenges, including a political crisis as well as a triple fiscal, banking, and exchange rate crisis. The government recently acknowledged that the banking sector alone had accumulated losses of $83 billion. The Lebanese pound is in free fall, trading at around LL4,000 to $1, while the official exchange rate is LL1,500 to $1. Recent consumer price index reports show price hikes of over 60 percent for some basic goods since March. Inflation for 2020 has been estimated by the government at 25 percent.

The economy is in deep recession, the private sector is strapped for cash due to informal capital controls imposed by an illiquid and possibly insolvent banking sector, and government revenues have collapsed. A stimulus package is needed to breathe life into the economy, but none has been forthcoming.

This crisis is not the outcome of months of protests against the political class, nor is it the consequence of measures taken to deal with the coronavirus. Rather, it is the result of decades of colossal political and economic mismanagement and corruption enabled by a sectarian power-sharing system.

A self-defeating logic has prevailed in the country for the past seven months. Lebanon needs an immediate injection of dollar liquidity to support its economy. For that, the government must present a viable economic and financial plan through which it can negotiate external support, particularly with the International Monetary Fund (IMF), the only institution capable of an immediate disbursement of budgetary support. The IMF seal of approval would, in turn, open the door to assistance from other entities, including the European Union.

However, the IMF will only respond to a transparent and measurable reform plan. And that is where Lebanon is continuing to waver. The policies required to address Lebanon’s daunting problems include spending cuts in the public sector, ending the hijacking of state institutions, and, perhaps most important, reform of the highly inefficient electricity sector, which contributes greatly to the annual budget deficit. Yet most of the reforms would undermine the vested interests of the politicians and parties, who thus far have proven unwilling to accept the pain of adjustment. The political cost of necessary austerity measures would also lose these parties support among their political clients.

A result of this is that the government’s approach to the crisis has been ad hoc and inconsistent. This has had two consequences. First, Lebanon is in the midst of a deep recession. Dollar shortages have forced the economy to adjust to lower imports, while the pressure on public finances has triggered sharp cuts in spending (excluding essential spending). The economy is experiencing a significant contraction, with some experts suggesting it may be in the order of 10–15 percent—equivalent to what the United States experienced during the Great Depression. Second, the dramatic depreciation of the Lebanese pound, and the fact that Lebanon is highly reliant on imports, has resulted in high inflation, resulting in a rapid erosion of real income among Lebanese.

This double shock has had enormous and debilitating social consequences, which may have existential repercussions for the country. The scale of wealth destruction today is catastrophic. The middle class is becoming poor as more than 1.6 million Lebanese are unable to meet their basic needs. Unemployment is skyrocketing, with some 200,000 individuals said to have lost their jobs prior to the coronavirus lockdown. The number is surely higher among the youth.

To compensate, politicians and political parties have resorted to using the financial and health crises to score points and regain a measure of popularity. On the defensive and in survival mode, they are in search of scapegoats to draw attention away from themselves. Last week, the government and its backers—principally the Free Patriotic Movement and Hezbollah—sought to put the blame on the central bank governor, Riad Salameh, evidently as part of an effort to oust him and replace him with a figure of their choice. However, it was reported that the United States and France had warned Lebanese officials, through their ambassadors in Beirut, that removing Salameh now was a bad idea. However, he continues to be a target of the protestors, who blame him for having covered for the policies that brought Lebanon to where it is today.

Lost in this noise are the broader interests of a population that is seeing its country disintegrate. The mercenary behavior of the political class was most evident in the government’s decision, in the midst of the coronavirus crisis, to enact a new system to help the most vulnerable rather than use an existing World Bank national poverty targeting program it associated with previous governments. The new system needs time to set up, which Lebanon’s poor population doesn’t have, and allows much room for nepotism and abuse.

Meanwhile, political parties are adopting local measures to address the needs of their constituents, furthering the prospects of fragmentation and possibly even conflict. All politicians or parties have announced plans for combating the spread of the coronavirus, including the establishment of quarantine areas, the deployment of medical staff and sanitization crews, and food assistance to the needy. Each party, in coordination with municipalities within their zones of influence, have established isolation centers for Covid-19 patients who do not have the means to self-isolate at home. Hezbollah has deployed the most extensive efforts, including establishing nineteen isolation centers, and has even conducted tours for international and local media to showcase their efforts.

Yet these measures will not be enough. Despite the coronavirus, the Lebanese have been back on the streets in recent days protesting the catastrophic decline in their livelihoods. People are going hungry and some protests are turning violent as protestors attack banks, now a potent object of their anger. This behavior implicitly assumes that the public has no expectation that the politicians will address the root causes of the country’s financial crisis. What Lebanon is facing today is likely to last for years, and the chances of recovery are thin.

The security repercussions of social unrest will be significant and are difficult to assess. Lebanon’s trajectory is one of expanding hardship and a probable exodus of all those capable of finding work abroad. As more and more businesses declare bankruptcy, a larger number of Lebanese will find themselves on the streets, especially youths who today see no prospects of employment or of building a life in their country. And as the resources of the political actors dwindle, the power vacuum on the ground may leave room for those hoping to gain from instability.

For Lebanon to avoid implosion, its politicians and parties must recognize that to preserve themselves they will need to preserve the country. That will mean accepting a necessary level of reform. While this may be a tall order, it is a required first step to preventing a drift toward conflict. The politicians will also need to allow a government of independents to take office, one tasked with negotiating a financial and economic rescue plan for Lebanon and overseeing early elections. While the former is critical for social stability, the latter is crucial for regaining legitimacy and renewing political life. Without this, Lebanon will continue its slide into chaos, and possibly worse.