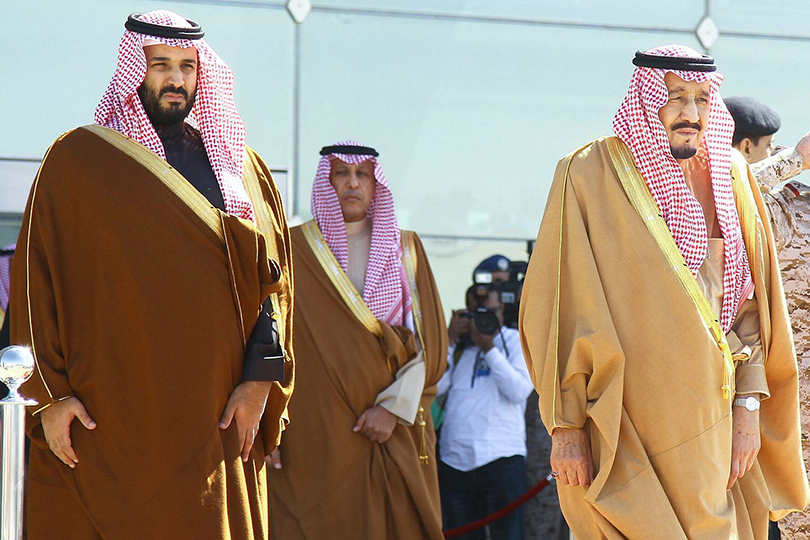 Is the ailing Saudi King Salman about to die and be replaced by his controversial son, Crown Prince Mohammad bin Salman, aka MbS? The monarch is hospitalized in Riyadh, suffering from an inflamed gall bladder. That’s not normally life-threatening but the energy world is abuzz with rumor; after all, the kingdom is the world’s largest petroleum exporter and any disruption in Saudi oil flows is a big deal.

Why should there be any change in Saudi oil exports? Because a transition in power may be challenged from within the Saudi royal family, the House of Saud. Since Salman, now 84, came to the throne in 2015, he has devolved power steadily to MbS, his favorite son. The 34-year-old prince is minister of defense and, since 2017, has been heir apparent. (The previous crown prince, his elder cousin Muhammad bin Nayef — known as MbN — was “persuaded” to step down in favor of MbS.)

MbS is an iconoclast and proud of it. Perhaps many of the royal family actually may be scared of him, some having experienced detention in the Riyadh Ritz Carlton three years ago until they agreed to hand over hundreds of millions of dollars in assets, allegedly obtained by corruption. The tough style of MbS, who has a $550 million ocean-going yacht and a $300 million French chateau in his own portfolio, has been burnished since then by his imprisonment of anyone whom he deems a critic. (Some writers would have written “imprisonment or worse,” although MbS denies actually ordering the killing of exiled critic and Washington Post op-ed writer Jamal Khashoggi in Istanbul nearly two years ago.)

Curiously, despite his self-evident power, MbS seems almost paranoid of opposition to him. Earlier this year, elder-cousin MbN was taken from palace arrest to a prison even though, at best, the former crown prince — who has suffered at least one heart attack — is a mere figurehead for other potentially rebellious Saudi princes. Much media attention has focused on MbN’s former chief lieutenant in the Saudi security services, Saad al-Jabri, who has political asylum in Canada. Saturday’s Wall Street Journal had a long article based on Saudi official sources, describing al-Jabri’s alleged previous corruption; a few weeks earlier, Washington Post writer David Ignatius used his column to tell al-Jabri’s side of the story, emphasizing his crucial role in working with the U.S. to defeat al-Qaeda. On Monday, Reuters reported a Saudi Twitter storm criticizing al-Jabri.

King Salman may not be on his deathbed, but MbS is renowned for not wanting to waste an opportunity. Apart from his regal title, King Salman is also “Custodian of the Two Holy Mosques” of Islam, in Mecca and Medina, as well as prime minister. MbS is already the de facto leader of the kingdom — the Saudi foreign ministry refers to the two men as “The Leadership” — so perhaps the prime minister’s title now will become his.

Saudi succession rules are theoretically clear-cut but can be adapted. Could MbS become regent during his father’s indisposition? Yes, but it would require the father to declare this. Could the king abdicate? Again, theoretically, yes, although it would be a new precedent. MbS likely does not want to find himself asking the senior princes who make up the so-called Allegiance Council for their approval, since some would not give it.

All this makes for potentially great drama, even for this coronavirus era. By comparison, the succession in neighboring Kuwait, where the 90-year-old ruling emir also has been hospitalized, is boring. In energy terms and regional geopolitics, Saudi Arabia is the place to watch.