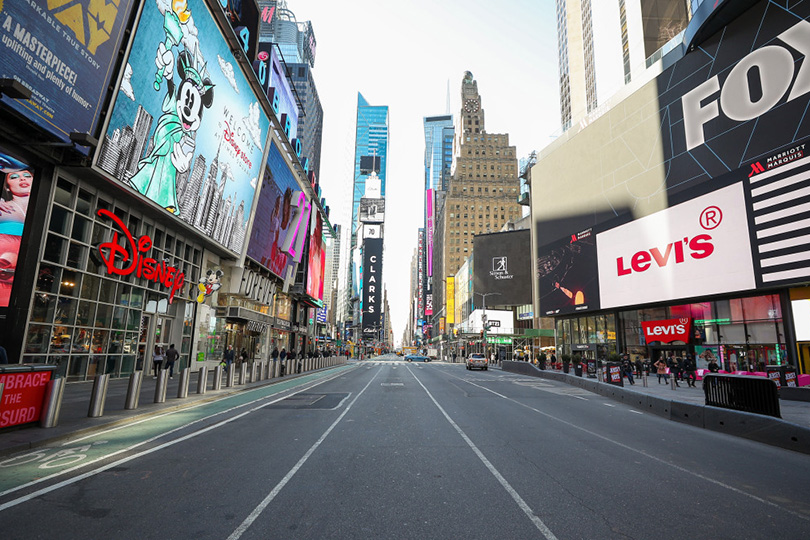 The systemic failure of the capitalist order triggered by the coronavirus has reinforced the growing awareness that extreme wealth inequality...

The systemic failure of the capitalist order triggered by the coronavirus has reinforced the growing awareness that extreme wealth inequality is a fundamental characteristic of the system.

“Billions of dollars were allocated to business while millions of people are facing an increasingly desperate situation.”

As the capitalist emperor strolls down the avenue of U.S. public opinion butt-naked but for the first time since the 1930s, more and more people are starting to realize that they were not crazy. The brutal failures of the capitalist system that they saw were not a figment of their imagination or a diversion from their own personal failures. Instead, they were the awful reality of degradation, dehumanization and social insecurity embedded in the system. Many could see that reality but wouldn’t allow themselves to believe their own eyes and experiences. They couldn’t call it out like the kid in the fable – until now.

The claim that the U.S. was an exceptional nation and that the capitalist order represented the highest expression of human development has been shattered by the second global collapse of the capitalist order within twelve years. Millions thrown out of work, global supply chains disrupted, trillions disappeared in the capitalist casino euphemistically called the stock market… The state’s feeble and class biased response to COVID-19 has resulted in a costly lesson in class politics for the U.S. public.

The dictatorship of the capitalist class has survived because the class reality of the dictatorship has been obscured. Limited democracy, social democracy, white nationalism in the form of patriotism, the corruption of unions, the post-war compromise between capital and labor, state subsidies for the expansion of the white middle-class, debt-driven consumption and cross-class white suppression of the democratic and human rights of African Americans provided the material and ideological basis for the perpetuation of the dictatorship throughout most of the 20th century and into the 21st.

“The claim that the U.S. was an exceptional nation has been shattered by the second global collapse of the capitalist order within twelve years.”

However, the systemic failure of the capitalist order triggered by the coronavirus has reinforced the growing awareness among the population that extreme wealth inequality is not just a temporary quirk that can be remedied with tax and some redistributive policies but a fundamental characteristic of the system.

Beyonce and the Politics of Cultural Dominance

For example, the debate that took place leading up to the passing of the legislation by Congress to address COVID-19’s impact dramatically exposed a capitalist class agenda that was objectively opposed to the interest of the entire working class, the poor, and the declining middle-class.

The people saw that billions of dollars were allocated to business while millions of people are facing an increasingly desperate situation. They are facing their second pay period without a full check and they are weeks away from receiving any kind of meaningful relief. But the peoples’ bills continue to mount up while the multinational corporations get bailed out. April rent and mortgage payments are due and with everyone home and eating more but with less money for food, thousands are being forced to go without or rely on food pantries. The $1,200 payoff is an insult.

And with the tragic reality of the shamefully inadequate public healthcare system in the U.S. and the rumors that private insurance healthcare premiums might increase 40% next year, the capitalists want to shut down any discussion around Medicare for All along with any discussion on nationalizing the healthcare industry.

While millions are losing their employer-based healthcare coverage, Biden says that nothing has changed his opposition to Medicare for All. Another neoliberal Democrat.

This is not being missed by many people.

The demystification of capitalism and a realistic understanding of the role of the U.S. in the global order is a good thing and that will be the silver lining coming out of this current crisis.

The precipitous decline of U.S. power and prestige is visible for all to see. The world sees that it is the Chinese who are sending ventilators to Europe. The world also sees that several states and U.S. federal agencies like FEMA are being forced to buy ventilators and face masks from China.

The world also recognizes that the U.S. lost its wars in Afghanistan and Iraq, despite its enormous war machine and the failed attempt to effect regime change in Syria.

The public outside of the U.S. know that there is absolutely nothing exceptional about this nation, except for its inability, up until now, to see itself the way that millions see it – as a declining power that is morally corrupt and a danger to itself and the world.

“The world sees that it is the Chinese who are sending ventilators to Europe.”

The ability to see the emperor and all his nakedness and know they are seeing the truth, reflects the loss of what Danny Haiphong and Robert Sirvent call the ideology of “American exceptionalism and American innocence.”

That shift in consciousness is occurring slowly and unevenly. But let there be no doubt what this change in consciousness will result in. It will not mean that the rulers will surrender power to the aroused masses without a fight. No, it only means that the subjective factor – a revolutionary consciousness – will catch up with the objective factor of the ongoing crisis of the Pan-European white supremacist colonial/capitalist patriarchy. These are the conditions for a revolutionary advance.

That moment is on the horizon. Can you see it?