What would happen if all the world’s trees disappeared? 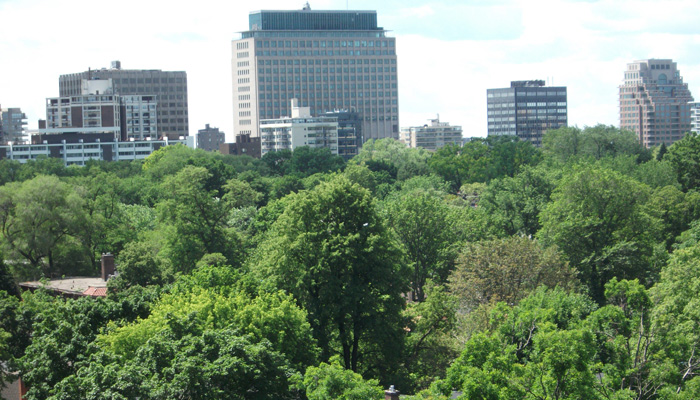 As the Amazon fires continue to burn, Rachel Nuwer asks: how dependent are we on the survival of forests?

In Mad Max: Fury Road, Charlize Theron’s Furiosa strives to return to “the Green Place” – a tree-filled oasis in the otherwise lifeless wasteland that the Earth has become. When Furiosa arrives at the sacred spot, however, she finds only skeletal trunks and sprawling dunes. She screams in anguish. Without trees, all hope seems lost.

Furiosa’s feelings were justified. “Forests are the lifeline of our world,” says Meg Lowman, director of the Tree Foundation, a non-profit organisation in Florida that is dedicated to tree research, exploration and education. “Without them, we lose extraordinary and essential functions for life on Earth.”

Trees’ services to this planet range from carbon storage and soil conservation to water cycle regulation. They support natural and human food systems and provide homes for countless species – including us, through building materials. Yet we often treat trees as disposable: as something to be harvested for economic gain or as an inconvenience in the way of human development. Since our species began practicing agriculture around 12,000 years ago, we’ve cleared nearly half of the world’s estimated 5.8 trillion trees, according to a 2015 study published in the journal Nature.

Much of the deforestation has happened in recent years. Since the onset of the industrial era, forests have declined by 32%. Especially in the tropics, many of the world’s remaining three trillion trees are falling fast, with about 15 billion cut each year, the Nature study states. In many places, tree loss is accelerating. In August, the National Institute for Space Research showed an 84% increase in fires in the Brazilian Amazon rainforest compared to the same period in 2018. Slash-and-burn is also especially on the rise in Indonesia and Madagascar.

Barring an unimaginable catastrophe, however, there’s no scenario under which we would fell every tree on the planet. But imagining a dystopian, Mad Max-style world in which all trees on Earth suddenly died can help us appreciate just how lost we would be without them.

“Let me just start with how horrible a world without trees would be – they are irreplaceable,” says Isabel Rosa, a lecturer in environmental data and analysis at Bangor University in Wales. “If we get rid of all the trees, we will live [on] a planet that might not actually be able to sustain us anymore.”

For starters, if trees disappeared overnight, so would much of the planet’s biodiversity. Habitat loss is already the primary driver of extinction worldwide, so the destruction of all remaining forests would be “catastrophic” for plants, animals, fungi and more, says Jayme Prevedello, an ecologist at Rio de Janeiro State University in Brazil. “There would be massive extinctions of all groups of organisms, both locally and globally.”

The wave of extinctions would extend beyond forests, depleting wildlife that depends on single trees and small stands of trees as well. In 2018, Prevedello and his colleagues found, for example, that overall species richness was 50 to 100% higher in areas with scattered trees than in open areas. “Even a single, isolated tree in an open area can act as a biodiversity ‘magnet,’ attracting and providing resources for many animals and plants,” Prevedello says. “Therefore, losing even individual trees can severely impact biodiversity locally.”

The planet’s climate would also be drastically altered in the short and long term. Trees mediate the water cycle by acting as biological pumps: they suck water from the soil and deposit it into the atmosphere by transforming it from liquid to vapour. By doing this, forests contribute to cloud formation and precipitation. Trees also prevent flooding by trapping water rather than letting it rush into lakes and rivers, and by buffering coastal communities from storm surges. They keep soil in place that would otherwise wash away in rain, and their root structures help microbial communities thrive.

Without trees, formerly forested areas would become drier and more prone to extreme droughts. When rain did come, flooding would be disastrous. Massive erosion would impact oceans, smothering coral reefs and other marine habitats. Islands stripped of trees would lose their barriers to the ocean, and many would be washed away. “Removing trees means losing huge amounts of land to the ocean,” says Thomas Crowther, a global systems ecologist at ETH Zurich in Switzerland and lead author of the 2015 Nature study.

In addition to mediating the water cycle, trees have a localised cooling effect. They provide shade that maintains soil temperatures and, as the darkest thing in the landscape, they absorb heat rather than reflect it. In the process of evapotranspiration, they also channel energy from solar radiation into converting liquid water into vapour. With all of those cooling services lost, most places where trees formerly stood would immediately become warmer. In another study, Prevedello and his colleagues found that complete removal of a 25 sq km patch of forest caused local annual temperatures to increase by at least 2C in tropical areas and 1C in temperate areas. Researchers have also found similar temperature differences when comparing forested and open areas.

On a global scale, trees combat warming caused by climate change by storing carbon in their trunks and removing carbon dioxide from the atmosphere. Deforestation already accounts for 13% of total global carbon emissions, according to an IPCC report published in August, while land use change in general accounts for 23% of emissions. With all trees on the planet wiped out, previously forested ecosystems “would become only a source of emission of carbon dioxide into the atmosphere, rather than a sink,” says Paolo D'Odorico, a professor of environmental science at the University of California, Berkeley.

Over time, Crowther predicts that we would see the release of 450 gigatonnes of carbon into the atmosphere – more than doubling the amount that humans have already contributed. For a while, this effect would be offset by smaller plants and grasses. But while smaller plants capture carbon at a faster rate than trees, they also release it more rapidly. Eventually – perhaps over a few decades – these plants would no longer be able to head off the coming warming. “The timeline depends on where you are, since decomposition is much faster in the tropics than the Arctic,” D’Odorico says. “But once carbon dioxide is in the atmosphere, it doesn’t matter if it’s coming from here or from there.”

As decomposition slowly detonated this ticking carbon bomb, the Earth would transform into a “vastly” warmer planet, Crowther says – the likes of which we haven’t experienced since before trees evolved. Large amounts of carbon would also run into the oceans, causing extreme acidification and killing possibly everything but jellyfish, he says.

Humanity’s suffering would begin well before catastrophic global warming took place, however. The increased heat, disruption to the water cycle and loss of shade would take a deadly toll on billions of people and livestock. Poverty and death would also descend on many of the 1.6 billion people who currently rely directly on forests for their livelihoods, including for harvesting food and medicine. More people still would find themselves unable to cook or heat their homes, given the lack of firewood. Around the world, those whose work revolves around trees – whether as loggers or paper-makers, fruit growers or carpenters – would suddenly be jobless, devastating the global economy. The timber sector alone provides employment to 13.2 million people and generates $600bn (£500bn) each year, according to the World Bank.

Agricultural systems would likewise swing wildly out of whack. Shade crops like coffee would drastically decline, as would ones that rely on tree-dwelling pollinators. Due to temperature and precipitation fluctuations, places that formerly produced crops would suddenly fail while others that were previously unsuitable might become desirable. Over time, though, soils everywhere would become depleted, requiring significant amounts of fertiliser for crops to survive. Further heating would eventually render most places uncultivatable and unliveable.

On top of these devastating changes would be health impacts. Trees clean the air by absorbing pollutants and trapping particulate matter on their leaves, branches and trunks. Researchers from the US Forest Service have calculated that trees in the US alone remove 17.4 million tonnes of air pollution each year, a service valued at $6.8bn (£5.6bn). At least 850 lives are saved as a result and at least 670,000 cases of acute respiratory issues are avoided.

D’Odorico adds that we might also see outbreaks of rare or novel diseases transferred from species that we normally do not come into contact with. He and his colleagues found that Ebola’s transfer into humans occurs in hotspots of forest fragmentation. A sudden loss of forests everywhere could trigger a temporary spike in our exposure to zoonotic infections such as Ebola, Nipah virus and West Nile virus, he says, as well as to mosquito-borne diseases like malaria and dengue fever.

A growing body of research also points to the fact that trees and nature are good for our mental wellbeing. New York State’s Department of Environmental Conservation, for example, recommends walking in forests to boost overall health, including for reducing stress, increasing energy levels and improving sleep. Trees also seem to help the body recover: a famous study from 1984 revealed that patients recuperating from surgery experienced shorter hospital stays if they had a green view rather than one of a brick wall. More recent research revealed that spending time around grass and trees reduces symptoms in children with attention deficit hyperactivity disorder, and numerous studies have also documented a positive correlation between green space and kids’ performances in school. Trees may even help to combat crime: one study found that a 10% increase in tree cover was associated with a 12% reduction in crime in Baltimore.

“So many things that lead to physical and mental wellbeing issues can be significantly reduced by spending time in a forested environment,” says Kathy Willis, a professor of biodiversity at the University of Oxford. “That’s why ‘forest bathing’ is now a medical prescription in Japan.”

The loss of trees would also be mourned on a deep, cultural level. Trees are staples of countless childhoods and feature heavily in art, literature, poetry, music and more. They have factored into animistic religions since prehistory and play prominent roles in other major religions practiced today. Buddha attained enlightenment after sitting beneath the Bodhi Tree for 49 days, while Hindus worship at Peepal trees, which serve as a symbol for Vishnu. In the Torah and Old Testament, God makes trees on the third day of creation – even before animals or humans – and in the Bible, Jesus dies on a wooden cross built from trees.

“A lot of people view forests with dollar signs,” Lowman says. “But we’ve never come up with a monetary figure for the spiritual importance of forests.”

All told, human beings would struggle to survive in a world without trees. Urbanised, Western lifestyles would quickly become a thing of the past and many of us would die from starvation, heat, drought and floods. Surviving communities, Lowman believes, would likely be those that have retained traditional knowledge about how to live in treeless environments, such as Australia’s Aboriginals. Crowther, on the other hand, suspects that life would only persist in a Mars-like colony, enabled by technology and entirely divorced from the existence we have always known.

“Even if we could live in a world without trees, who would want to?” Crowther says. “This planet is unique from everything else we currently know in the universe because of this unexplainable thing called life, and without trees, almost all of it would just be screwed.”

Is America’s Global Prestige Growing, Shrinking, or about the Same?