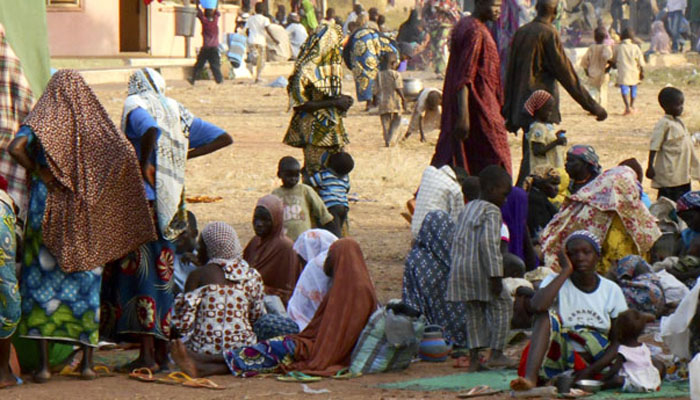 At a remote camp of 24,000 displaced people in the city of Bama, an average of six people have died per day, mostly from diarrhea and malnutrition

Thousands of Boko Haram victims are on the verge of starvation in northeastern Nigeria, months after being rescued from the radical Islamist group, the aid group Doctors Without Borders said on Wednesday.

At a remote camp of 24,000 displaced people in the city of Bama, an average of six people have died per day, mostly from diarrhea and malnutrition, according to the organization, also known by its French name Medecins Sans Frontieres, or MSF. Many more are on the verge of starvation.

“According to the accounts given to MSF by displaced people in Bama new graves are appearing on a daily basis. We were told on certain days more than 30 people were dying due to hunger and illness," said Ghada Hatim, MSF head of mission in Nigeria.

The camp in Bama is one of many that pepper northeastern Nigeria, where more than 2 million people are displaced. Many of their homes have been scorched by Boko Haram, which once controlled a huge swatch of the region before being forced to retreat by the Nigerian military.

The displaced now live in camps managed by the Nigerian military and the country's own aid agencies. The United Nations has a presence as well, but international aid groups are far less present than they are in other humanitarian crises, in part because of the tense security situation and the military's restrictions on their movement.

Bama, about 35 miles from the major city of Maiduguri, has been largely cut off from supplies.

One Nigerian official described the city itself, which once housed roughly 350,000 people, as "a ghost city with virtually nothing functional."

Although there has been significant international attention on the fight against Boko Haram and the pursuit of scores of schoolgirls kidnapped two years ago, victims who have been rescued from the group continue to languish with little assistance. The recent report shows just how dire things have become for many of them.

"Of the 466 children screened by MSF medical teams at Nursing Camp," Doctors Without Borders said in a statement, "66 percent were emaciated.