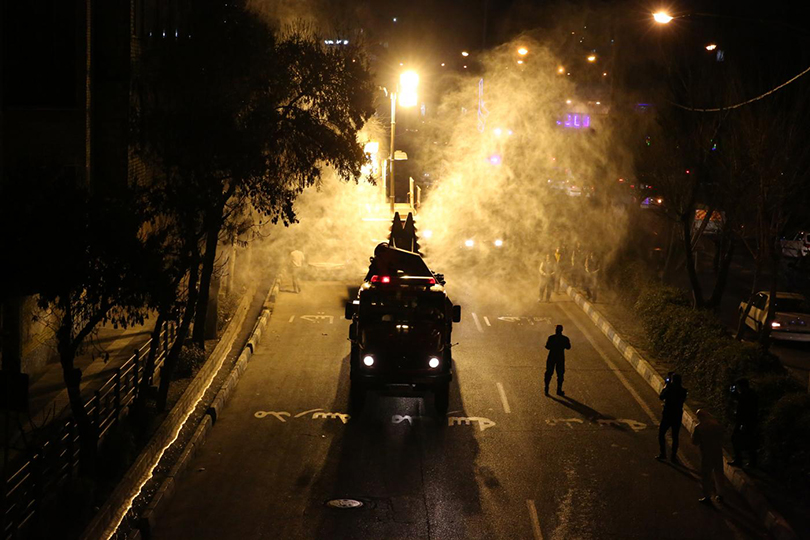 For the first time in living history, the headlines after a major presidential primary night weren’t focused on the election. Instead, they were focused on the coronavirus and its spread across the nation.

Even the election news focused on the fact that both Biden and Sanders were cancelling their post-primary rallies due to the coronavirus.

The American mood is certainly schizophrenic. While airplanes fly nearly empty as Americans are afraid of coming in contact with someone with the corona virus, they are willing to wait in line and crowd in cheek to jowl with others at grocery stores and warehouse clubs in order to buy toilet paper, sanitary supplies, water, and freeze dried food.

Although the US was slow in taking the virus seriously, they have reacted quickly in the last few days. Several states have declared States of Emergency. New York governor Cuomo called in the National Guard to police the New Rochelle area, which is the hot spot of corona virus infection on the East Coast.

President Trump after a dismissive attitude of the seriousness of the situation, came out Wednesday with a program of health and economic incentives to battle the epidemic. Although his speech was intended to assure the American public, he created confusion regarding some of the elements about banning travel from Europe and how the Americans will deal with testing…

However, there are a lot of problems in fighting this infection. Since many who get the virus don’t show any symptoms (or very mild ones), health officials don’t really know the extent of the infection or how serious it really is. For instance, an infected person with mild or no symptoms can pass it on to another person, who can develop a serious condition that can lead to death. Consequently, no one really knows the real situation, which leads to predictions that are probably more too pessimistic.

On the other hand, there are doctors who remain optimistic based on research on the virus and how it interacts with humans.

One positive is that studies are showing that the virus is most effective at 47.7 degrees Fahrenheit. At temperatures above that, it’s ability to spread decreases dramatically. One proof of that is that all the major hot spots in the US are in colder states. Warmer, drier states like Arizona have patients with the Corona virus, but it hasn’t spread throughout the community like it has in Washington State, Northern California, New York, and Boston.

This temperature weakness of the virus means that as summer approaches, the chances are good that new cases will decline, giving scientists a chance to discover a way to fight it before the winter cold returns.

In the meantime, the virus will have an impact of America’s economy, social interaction, stability, and even the presidential election in November.

Although the world has lost trillions of dollars in the world’s stock markets, much of that loss was do as much to the fact that stock prices were overvalued in the first place.

The biggest economic problem from the infection is production and consumer buying. With the corona virus ability to spread, many factories are closing in order limit the threat. Factories that aren’t producing aren’t selling to consumers. They aren’t paying their employees or suppliers either.

There is also consumer demand. With a population afraid to go out, brick and mortar stores are experiencing a decline in sales – unless they sell toilet paper, water, and sanitary supplies.

There is an upside for some sectors of the economy. As the population stays inside, they will probably increase their buying online. Businesses like Amazon should experience growth as more consumers rely on products that are delivered directly to them. In addition, many grocery store chains are also taking orders online and then delivering to homes.

Some companies that sell emergency food supplies have seen their business skyrocket. Companies that produce freeze dried foods or military rations for emergencies are working overtime to meet demand.

Companies that rely upon energy will do well, providing they have consumers buying their product or service. The mining industry is very energy reliant, but with slowing global demand for minerals and metals, they will see lower earnings in the upcoming quarters. With the decline in traveling and the oil war between Saudi Arabia and Russia, oil prices are expected to remain low, which will hurt the American petroleum sector.

Normally, low oil prices benefit the airlines. However, with the Corona virus scare, many airlines are flying nearly empty aircraft. Although lower ticket prices may tempt some customers, the airlines are in for a bad time.

One benefit for the US economy in the long run may be a return of some manufacturing to the US from China. Shortages in pharmaceuticals, rare earths, and electronics are encouraging some companies to rethink their strategy of subcontracting to China. In fact, there is talk that President Trump may invoke his presidential powers to bring back pharmaceutical production of masks, antibiotics, medicines, etc. to the US.

One only had to look at the fights breaking out over the last package of toilet paper on the shelves to see how the panic is impacting Americans. The “everyone for themselves” mentality is breaking out across the nation.

This wouldn’t be so bad normally, but in a society already fractured by racial, political, economic, and gender lines, it is only exacerbating the fissures already in American society.

We can add to that a geographical divide as most of the corona illness is on the predominantly Democratic coastlines.

Should the pandemic grow and there becomes a refugee flow from the Democratic coastlines to the interior and warmer south, which are more Republican, there could be calls for quarantines to keep people out of these states – especially if there are instances of them bringing the corona virus with them

Another issue is Americans’ basic human rights and the medical battle against the epidemic. Although quarantines have been instituted in the US in the past, this could potentially be the biggest quarantine in American history. How will Americans feel about military forces patrolling the street like they are doing in New Rochelle, New York? How will they react to orders limiting their travel?

These may seem to be minor issues, but in a society that fights over toilet paper, what can happen is anyone’s guess.

Ever since the coronavirus struck, some who have have wondered how this might impact the presidential election. Many think that Trump could lose the election as he will be too weak to effectively govern.

As we have noted in the past, a week is an eternity in politics. Consequently, there is no way to predict what will happen in November.

Although Democrats are already blaming Trump for the problem, Trump’s poll numbers are currently at an acceptable range compared to previous presidents. There is also the fact that America is not currently experiencing the coronavirus deaths that have occurred in other countries Italy, Iran, and China are having.

There’s also the fact that nothing makes a president more presidential than going on national TV and announcing his plans. Obama did it when U.S. Special Forces killed Osama bin Laden and his poll numbers jumped. Trump did that on Wednesday as he outlined the economic and other steps the government would take. These include a ban on travel from Europe (except for Britain) for the next 30 days, with the exception of U.S. citizens and lawful permanent residents, and proposed economic measures to help businesses and people facing an economic impact from the virus.

One step was to eliminate the health insurance co-pays and completely cover coronavirus treatment. This should encourage people to get treatment earlier. But many observers echoed what a CNN political analyst observed: “President Donald Trump set out to steady a rattled nation and a diving economy in a solemn Oval Office address, but instead sowed more confusion and doubts that he is up to handling the fast-worsening coronavirus crisis”.

“Trump spoke to the nation at a fearful moment, when the rhythms of everyday American life are starting to shut down -- with schools closing, the NBA suspended, hospitals on high alert and movie icon Tom Hanks saying he and his wife have the disease”.

The White House also is preparing an executive order that would eliminate U.S. government reliance on foreign made medical supplies. The order covers 400 “essential medicines” and medical countermeasures and aims to attract more medical jobs to the United States.

If the virus slows down as summer temperatures arrive, the coronavirus issue could be gone long before the election. Since it takes a few months, the start of the 2020/2021 flu season will not be in full swing when the election is held.

The biggest impact may be economic. If voters view the economy pessimistically and think conditions will get worse before getting better, they will be more likely to vote Democratic.

One mixed blessing for Trump is the decline in the markets. That limits a downturn in the days before the election, which hurt Senator McCain, who was leading Obama before the stock market crash in 2008. It also means that stocks may experience a bull market this fall, which will only help Trump.

However, it’s important to remember that the world is experiencing an unusual event. Although we have seen pandemics, they haven’t been as contagious and have been limited geographically. We are truly in unknown territory.