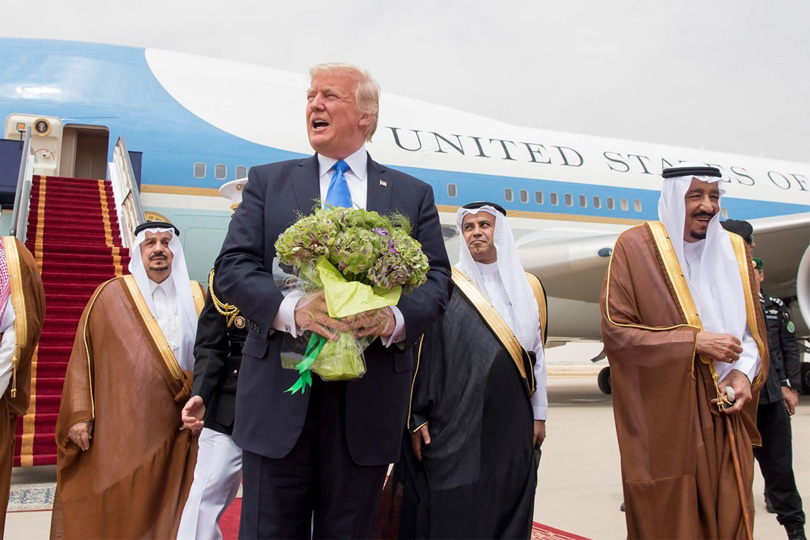 While it’s not unusual for an American president to visit Saudi Arabia, the circumstances of this visit are quite different from presidential visits of the last few decades. In the past, the visits were of an energy dependent superpower (America) visiting the energy superpower (Saudi Arabia). This trip, however, sees America as a resurgent energy producer and Saudi Arabia as a nation that is facing budget deficits thanks to low energy prices and military adventures in Yemen and Syria.

Despite the changed circumstances, the fact that Trump is making his first visit to Saudi Arabia instead of Canada or Mexico, the traditional first trip for American presidents, says a lot about Trump’s priorities.

Trump’s choice of countries was surprising following his “America First” campaign theme during the campaign which suggested he would limit the role of American global leadership. Many felt that this would mean less American engagement in the Middle East – especially in terms of pushing for a solution to the Palestinian/Israeli problem.

Trump’s visit to Saudi Arabia is proof that Trump has no intention of withdrawing from a global leadership role.

The first stop on Trump’s trip visit represents an outreach to the Muslim world, which he tended to disparage during the campaign. King Salman bin Abdulaziz al Saud is bringing together several Islamic heads of state for an Islamic-American Summit.

Leaders from Jordan, Egypt, Algeria, Niger, Yemen, Morocco, Turkey, Pakistan, Iraq and Tunisia have all been invited. Trump will also meet the monarchs of the six-nation Gulf Cooperation Council.

The visit and summit represents a chance to accomplish many goals. Firstly, Trump hopes that his symbolic choice of Saudi Arabia as his first stop can persuade the Islamic world he is not anti-Muslim.

He also needs to reinvigorate alliances with Middle Eastern powers that had felt neglected by Obama. Ties with Saudi Arabia were in particularly bad shape, with the Saudi Arabia feeling Obama was too eager to appease its main regional rival, Iran, while negotiating a deal to rein in Tehran’s nuclear program.

Shared opposition to the Iran deal, which Trump has called “disastrous,” will form the bedrock of the renewed relationship with Saudi Arabia. In many ways, this is quite different from the past, where America’s energy needs were the cornerstone of the Saudi-American relationship.

When he announced his trip, Trump said he wanted to “begin to construct a new foundation of cooperation and support with our Muslim allies to combat extremism, terrorism and violence, and to embrace a more just and hopeful future for young Muslims in their countries.”

He also said, “Our task is not to dictate to others how to live, but to build a coalition of friends and partners who share the goal of fighting terrorism and bringing safety, opportunity and stability to the Middle East.” This is a clear step away from what was perceived as the preaching of Obama and nation building of Bush.

However, in order to convince the leaders of the Islamic nations that he isn’t anti-Islamic, he will have to address the failed attempt to ban citizens from six Muslim-majority countries and the unease that it created in the Islamic world.

Trump will also have to persuade these national leaders that despite his America First campaign theme, he will be an ally in solving problems in the Middle East.

In addition to meeting all the Islamic leaders, Trump will also have private meeting with Saudi leaders. He will also likely have separate meetings with GCC leaders too.

These meeting with the GCC leadership will try to find a common ground on ending the Syrian civil war. There will also be discussions on Iran, its increased regional influence , and the future of the Iranian nuclear deal. There may also be an announcement of a missile defense (THAAD) sale to Saudi Arabia, which will help counter GCC concerns about Iran’s missile program.

What may very well come out of the talks with the GCC nations, Jordan, and Egypt might be the framework of an “Arab NATO.” This is an idea that has been pushed by Saudi Arabia and the recent $100 billion arms deal between the US and Saudi Arabia may have sealed the deal.

Meeting with the Israeli and Palestinian Leadership

Trump is meeting with both Israeli Prime Minister Benjamin Netanyahu and Palestinian President Mahmoud Abbas as part of his push for a peace agreement between the two sides. Trump will likely outline his thoughts on achieving a solution to the Palestinian-Israeli conflict and according to unconfirmed reports he may reach an agreement to resume negotiation to be hosted by Egypt.

However, in many ways, his visit to Israel is as much for consumption by the American public as much as finding a way to reach an agreement between the Palestinian Authority and Israel. Evangelical Christians – a major voting bloc that supported Trump – are very pro-Israel. He wants to demonstrate to his domestic audience that he is a strong supporter of Israel.

In order to solidify his evangelical Christian support, Trump will visit Jerusalem’s Western Wall and give a speech at Masada, a fortress where Jewish rebels committed mass suicide rather than be taken alive by the Romans.

One sensitive issue is whether he will visit Yad Vashem, Israel’s Holocaust memorial. Israel is keen that he does, but the US side is saying they may not have time.

Despite the optics, Trump wants to make some progress on the Palestinian-Israel issue. Trump hopes to get the Israeli and Palestinian leaders into a room for at least a symbolic meeting. He also wants to keep both sides moving towards a peace agreement that has eluded previous presidents.

However, don’t expect any major breakthrough. Trump has little interest in the complex details of the peace process and so his goal will be to generate good headlines and try to give the two sides confidence that they can move forward with his help.

However, Israeli conservatives, who backed Trump in the election, aren’t totally happy with the president and may cause trouble. They weren’t happy when he asked Israel to hold off on settlements while he attempts to broker a peace deal.

Trump has also reneged on his promise to move the US embassy to Jerusalem and he seems to be favoring the two-state solution that the conservative Israelis oppose. So Trump will have to reassure anxious members of Netanyahu’s Likud Party as well as trying to act as an honest broker between the two sides.

On the Palestinian side, Trump will have to tread extremely carefully around Palestinian political sensitivities. Trump is known for controversial offhand comments. Unfortunately, offhand comments to Israeli audiences could infuriate Palestinians and damage any movement towards an agreement. There is a question if Trump can choose his words carefully during his visit to Israel.

Rome and the Pope

Ironically, the toughest part of Trump’s trip will probably be at the Vatican, where he will meet with the Pope.

Trump and the Pope differ on just about every major issue, from whether man-made climate change exists (the Pope firmly believes that it does) to the merits of capitalism, the rights of refugees and the growing gap between rich and poor.

Last year, they exchanged harsh words over Trump’s plan to build a wall along the US-Mexico border. The Pope said that any person who thought only of building walls, rather than bridges, was “not Christian.”

Trump, dismissed the criticism by responding, “For a religious leader to question a person's faith is disgraceful.”

A White House official said the two leaders are likely to discuss how “to bring together all the different religions in the fight against intolerance.”

From Rome, the President will travel to Brussels, where on May 25 he will attend a NATO meeting.

As with his visit to Saudi Arabia and Israel, Trump will have to explain and back away from his campaign rhetoric. On the campaign trail last year, he alarmed NATO leaders when he described the alliance as “obsolete.”

His comments concerned America’s NATO allies, who are facing an aggressive Russia, which is pressuring NATO countries with more aggressive military maneuvers.

Last month Trump reversed his position and declared that the alliance is in fact “no longer obsolete.”

The Brussels meeting will give the President an opportunity to reassure NATO and still push for larger European spending on defense.

From Brussels, the President will travel to Italy for the G7 summit, which takes place in the resort town of Taormina in Sicily on May 26-27. This will be the first G7 for President Trump, British Prime Minister Theresa May, President Macron of France, and Italian Prime Minister Paolo Gentiloni. The leaders of Germany, Canada, and Japan will also be there.

While the optics will be on cooperation, there are some areas of serious disagreement. On one side there is Trump and May, who question the value of the European Union. Then, there is German leader Merkel and French President Macron, who are strong advocates of the EU. This division will also color talks on the refugee crisis.

Global trade will also be a topic of discussion. “Everyone is concerned about the US attitude towards protectionism,” a G7 official told Reuters.

On the other hand, there will be agreement on the global fight against terrorism.

This Trump trip will be critical for the president. In addition to moving his foreign policy forward, Trump will probably learn on this trip that his campaign speeches are also heard around the world. In the end, the major task Trump is facing is convincing other national leaders that what he said at his rallies will not reflect what he will do for the next four years.